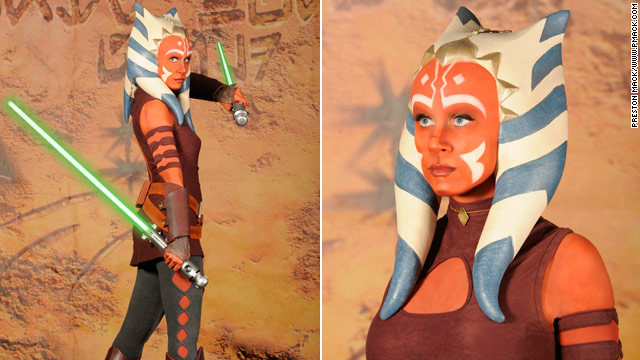 As any true fanboy or fangirl knows, dressing up in costume is called “cosplay,” and, as adults, many of us take this hobby very seriously. We spend hours perfecting these costumes and find a lot of pride and joy in debuting our works at local conventions or events. Go to Dragon*Con in Atlanta and you will behold some of the most amazing costumes you’ve ever seen, complete with a parade through the downtown streets showcasing the meticulous work of many hardcore fans.

I bring this up because, at times, I feel as if I live in two separate worlds that seem completely different - but the fans are actually more alike than they think.

My husband, David Eckstein, played Major League Baseball for 10 seasons, and during that time I probably went to about 1,000 baseball games. I live the life of a sci-fi loving fangirl and also the life of a passionate sports fan. 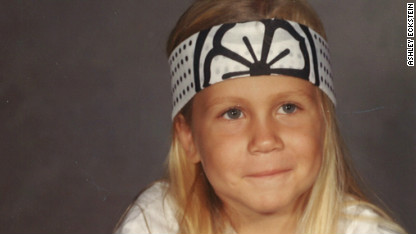 Eckstein dressed as the Karate Kid for a school portrait.

Almost every time I tell someone outside of my geeky world about the fact that I go to sci-fi conventions, I am usually met with a rude comment similar to, “Do you see a lot of freaks dressed up in costumes?”

Excuse me!? Why is this freaky? Why is it weird? I cannot even begin to tell you all of the creative ways I’ve seen sports fans dress up at games. I’ve seen guys who body paint their bare chests with their favorite team’s colors, people dressed up as their team’s mascot, lots of face paint, temporary tattoos, crazy hats, wild color-coordinating outfits. Some fans practically look like clowns the way they are decked out head to toe in support of their favorite team.

So I ask - Please tell me how this is any different than a sci-fi fan showing up at a convention in costume. The difference is that one form of dressing up is widely socially accepted and the other is not. However, both types of fans are passionate about the genre that they love, and they want to express themselves through what they wear. I actually see a lot of common ground between the two fan bases, and there is no difference to me. I fall into both fan bases, and I have elaborate sports outfits for all of the teams my husband has played for.

I also enjoy dressing up as my favorite characters, and I had the ultimate cosplay experience a couple of months ago.

For the first time, I got to dress up as Ahsoka Tano from "Star Wars: The Clone Wars." For those of you who don’t know, I am the voice of Ahsoka for the hit animated series on Cartoon Network, but I am also a major "Star Wars" fan.

As the voice of Ahsoka, I simply go into the recording studio and record my lines for the show. There is no need to ever dress up as the character, because they only need our voices to bring the character to life.

However, I am also a fan, and year after year I have been going to conventions, seeing hundreds of girls dressed up as Ahsoka, and secretly wishing I, too, could someday try on the costume. Well, with the help of my friends, my wish was granted, and I got to dress up as Ahsoka for the day! This was just me, as a fan, having fun!

All of a sudden, I reverted back to when I was a little girl. I wanted to have a light saber battle and help save the galaxy! I really felt like I was a Jedi. I felt strong, and it was very empowering.

Then it hit me: As a little girl, I could only dream about being these fantastical characters and saving the world, but as an adult, I realized I could actually BE a real-life Jedi and do great things. For example, the 501st Legion and The Rebel Legion are both worldwide groups of "Star Wars" fans who dress up in costume, raise an enormous amount of money for multiple charities every year, and attend all sorts of events bringing smiles to everyone they come in contact with. They have taken their love of cosplay and turned it into an opportunity to change people’s lives.

Unfortunately, I don’t own the Ahsoka costume in these photos, and sitting through four hours of makeup is not something that I can do on a daily basis.  But being in costume for the day made me realize that I don’t have to just dream about being a superhero - I have the power to be a real life superhero. I have the power to control my destiny, make my own decisions, do so much good with my time, and live my life the Jedi way.

You don’t have to dress up as your favorite character to change the world; however, it’s certainly more fun in costume!