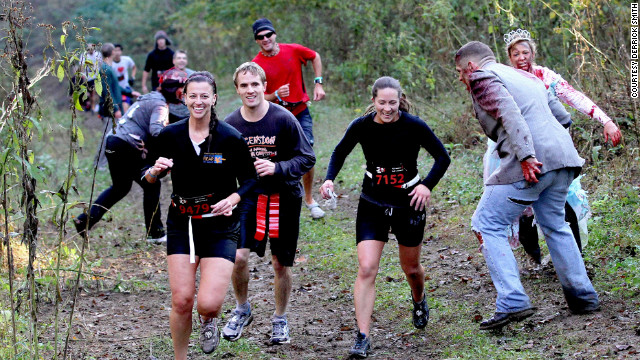 'Run For Your Lives': 5K puts racers in the middle of a zombie apocalypse

When it comes to the zombie apocalypse, popular culture has taught us that everyone falls into one category or another: infected or survivor.

You’re either running away from an undead threat, or you're running, and shambling, after your next human snack. Yet the role that’s so rarely discussed with zombie pop is that of a maker.

That has now changed. Instead of an act of God, nature or mad science, the zombie apocalypse has been orchestrated by one man, Derrick Smith

Smith is the co-creator of Run For Your Lives, a 5K race and “zombie-infested” obstacle course that officially launched last October in Darlington, Maryland, and is launching a nationwide roll-out in cities across the country, beginning with Atlanta on Saturday.

A fan of AMC’s “The Walking Dead,” Smith said he and childhood friend Ryan Hogan planned on creating an event similar to intense races Warrior Dash and Tough Mudder to raise the profile of Hogan’s athletic clothing line, Warwear. But then, they were trying to decide on something to run “from,” and the idea of zombies emerged.

Although he doesn’t classify himself as an “avid zombie fanatic,” Smith said he’s always enjoyed the movies and specifically prefers the zombies of “28 Days Later."

“I definitely appreciate the quick-moving zombies and the vacant city setting where there's strategy involved,” he said.

As a result, the 5K RFYL course (3.1 miles) is not a straight shot from start to finish. Smith and Hogan opted for a race where each course is unique and unpredictable.

“All of our course locations are designed based on the existing terrain with about 10 to 12 man-made and natural obstacles included,” Smith said. Furthermore, “there's multiple routes to the finish line, and there might be a couple dead ends, or you might hit a fork in the trail, and one way is going to be a little bit longer.”

He added that the course maps and obstacles are kept hidden, but the Darlington race included a 20-foot-tall cargo net and a “blood pit” filled with red liquid. The “Event Day Info” sent to participants warned of strobe lights and 3 feet of water. Smith also gleefully acknowledged that the Georgia red clay would leave a lot of opportunities for mud at the Atlanta race.

As for the zombies, Smith said they’re actually volunteers recruited through Facebook and Twitter. On race day, runners traverse this wasteland populated by slow and fast volunteer brain munchers.

The runner “survivors” wear a flag football belt with three flags that signify their health. If zombies pick off all the flags, runners are infected by the end of the race and won’t be eligible for prizes.

Meanwhile, the living get a survivor medal and a chance to win swag.

“We actually have health bonuses hidden throughout the course,” Smith said. “So as you're running through, you could lose all your flags, but - kind of like a real-life video game - there's going to be opportunities for you to snag a little health pack that would ensure you cross the finish line as a human.”

The attention to detail and strategy involved could position RFYL to capture the zombie zeitgeist and expand it into the real world as it spreads to 11 more cities in 2012 - including Boston, Los Angeles, Toronto and Pittsburgh, where director George A. Romero's “Night of the Living Dead” was shot. Smith said the Darlington event attracted approximately 10,000 spectators and participants between the ages 14 and 55.

Smith described the runners as a weird mix of hard-core zombie nerds, first-time runners and running enthusiasts looking for a new challenge.

He added that he’s received feedback from people who say they finally have an excuse to run, and that the strategy of the race allows the less athletically inclined to slow down, move with packs of survivors and avoid the next pack of the "dead" walkers. He said that option appealed to him personally, as well.

“I'm athletic, and I participate in recreational sports. But actually, just, like, running from point A to point B, or running around a track, never really interested me,” Smith said. “So that's why we took this direction; the obstacle course race, and then throwing in the zombies, makes it all a little more exciting to actually be running a race.”

As far as what attracts people to the idea of running the race and playing make-believe about life and death, Smith said RFYL attracts different levels of zombie fans, including those who view it as survival training.

“You have those people who have a plan, they have an arsenal, they have the water, the canned food, that whole bit,” he said. “Then you have the people who are more about just thinking about what an apocalypse actually would be; it's definitely an entertaining thought in my mind to think … what are the steps taken to actually survive.”

But he added that he thinks the analysis of the meanings behind zombies has gotten “a little too deep" when “just in general, I think you're dealing with death and what happens after death.”

The Run For Your Lives obstacle course is apparently one hell of a party. Once the race is over, zombies, survivors, infected zombies-to-be and even spectators join in the apocalypse after-party in the “safe zone.” With involvement from the American Red Cross, the Centers for Disease Control and Prevention and an appearance by IronE Singleton of “The Walking Dead,” Atlanta's all-day event will offer live music, food and drink, an awards show and games (knock the stacked zombie heads over with a baseball).

Smith said this party is nearly as crucial to the experience of surviving the "apocalypse" as running the race.

“We really try to put as much effort into the after-party as we do the race itself,” he said. “If it's the end of the world, you're going to want to have a good party.”