Michalowski finds R2-D2 to be the more interesting robot because it is limited by how it can communicate. R2-D2 is also much closer to the robotic designs that are currently possible. Because roboticists have followed their instinct to focus on purpose rather than facial expressions, robots that impact people the most can be the least human-looking.

Howard Choset will never forget the moment when his surgical snake robot wrapped around a living, beating human heart for the first time during a surgery last year. It was a culmination of his work and that of his team on a minimally invasive surgical robot, with both the flexibility and rigidity of a snake, that could help save lives. 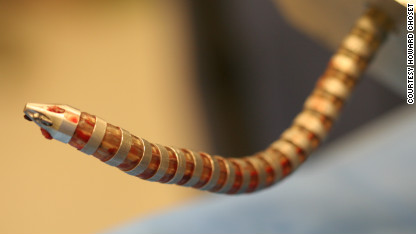 When you reach the heart of a roboticist, it is often a balance of curiosity, creativity and compassion that drives them to craft the “intelligent tools” designed to offer humanity a helping metal hand.

Like many roboticists, Choset, who is also a professor at Carnegie Mellon University’s Robotics Institute, doesn’t wish to replace humans with robots. Rather, he wants robots to help humans do their jobs even better. It is part of the passion roboticists share, and one he compares to the passion diehard sports fans feel for their favorite teams.

“I didn’t really choose robotics, it chose me,” he said.

Often, robotics drives these passionate minds to indulge in the craft outside of the lab, and after hours at home. Joydeep Biswas, a Ph.D. student working on the tour guide-esque CoBots with CMU professor Manuela Veloso, finds the greatest joy in experimenting with “nonresearch robots” with his friends.

One time, just for fun, they programmed one of his friends’ flying helicopter robots to lead a conga line of grounded robots - eager to see if they could keep from crashing into each other. It is the kind of play that drives research and pure joy, without robots that can talk back.

“We know we’re robotic nerds,” Biswas said. “I think everybody in the institute knows they’re nerds.”

Michalowski’s personal fascination with psychology and computer science led him to the field of social robotics - robots that interact and communicate with humans. Engineering social cues, linguistics, facial expressions, reactions and intuition was another thing, however. He liked the challenge of giving a non-humanoid robot a charming personality - like R2-D2.

“Socially interactive robots serve as a mirror we hold up to ourselves, and once we realize how difficult it is to build all of these capabilities, then we realize how amazing a human being is,” he said. “But we need to create a mouse before we create a person – making sure we can create simple robots that engage in simple behaviors, and do it very well.”

This is how Michalowski went from a robotic receptionist project at CMU to working on a small, lovable round robot named Keepon, developed by Japanese roboticist Hideki Kozima. The original design of the robot was to work with autistic children as a therapeutic and friendly tool.

As Michalowski studied the little yellow robot, he discovered that the character “seemed to want to dance.” “I had the feeling that there was something in its character that had not quite been expressed yet.” To him, the key to connecting robots and humans was getting them in sync with one another. 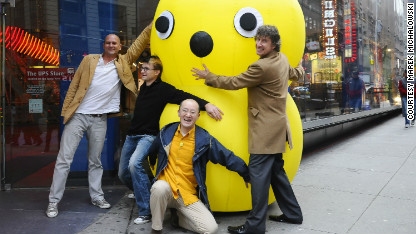 Marek Michalowski and Hideki Kozima (second and third from left) pose with a life-size version of Keepon at Toys 'R Us.

“In all of our interactions with each other as humans, we’re doing a lot of things that have rhythm. Maybe this is one reason robots have been perceived as so rigid and awkward, because they’re not in time with us.”

So Michalowski gave Keepon the gift of dance. Now, the robot listens to the beat for a moment and joins in by bopping around on his little platform.

Like Michalowski, Heather Knight, a social roboticist and owner of Marilyn Monrobot, has a love for developing personality in her robots. She wants to replace computers, not people, with robots, to create a more personal connection between humans and technology.

Throughout her impressive work in the field, Knight has managed to combine not only psychology and engineering through social robots, but theater as well. To her, the intersection of robotics and storytelling is the next frontier.

Data, her stand-up comedian robot, rapidly became viral on the Internet, and appeared at her joint showcase with Michalowski over the summer, the Robot Film Festival, which brings artists and roboticists together. The filmmakers explore futuristic themes with technology, and the technologists are encouraged to leave their shells, she said.

Her drive is to make machines both charming and compelling, and she’s managed to do that not only with robots, but with installation art and the famous Rube Goldberg machine from OK Go’s “This Too Shall Pass” music video as well. Some of her installation art includes gardens of robot flowers, which act curious and look at people as they walk by, but turn shy if people come too close.

“It really hammered into me that there’s this real depth of talent and intuition there in terms of interaction design, and how you can make a machine charismatic,” she said. “I really like the idea of technology as a facilitator of people, and installation art is a fun way to provoke that.”

What all these minds have in common is a presence at CMU’s Robotics Institute. The broad, interdisciplinary field of robotics, and its creators, have found a home there. It is an environment that encourages this collaboration of overwhelming intelligence, compassionate purpose and innovative technology.

“I’m surrounded by all these colleagues doing robotics work, and to me, that’s my whole life,” Choset said. “Having that critical mass is so special. There is always someone to talk to you about robots. I think what binds us together is not only the subject, but our feelings towards the subject.”

From robots that can land on the moon and autonomously dive in underwater caverns, to robotic soccer teams and guides called CoBots that escort visitors throughout the Institute, CMU includes as many variations in the field as it does experts.

The complex CoBots guide visitors from one place to another at the institute. Designed by Michael Licitra in a project led by Manuela Veloso, they lack any resemblance to humans, even arms. Naturally, Knight wants to eventually provide CoBots with the ability to deliver singing telegrams to people in the department.

“Since I’m interested in expression, I’m really excited because I get to play with, how does something that doesn’t have any human attributes still be expressive?” she said.

It proves that we don’t have to be able to hold hands with a robot to appreciate its personality, and that creativity lies at the heart of what roboticists can engineer within their concepts.

Although much of the work that Michalowski, Choset and Knight do involves a heavy reliance on technology, it is equally based in creativity – something the general public doesn’t often recognize as belonging to scientists of any field.

“Sometimes people say scientists lack creativity because we’re constrained by our creativity,” Choset said. “The more constraint and challenges you throw at computer scientists and engineers, the more creative they become. The detail is where everything is exciting – that’s where the beauty is.”