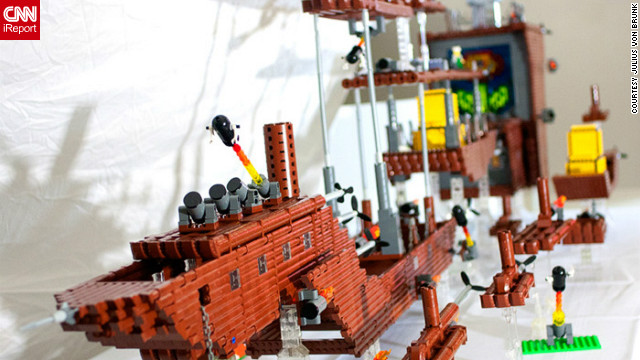 Ever since the 1988 release of "Super Mario Bros. 3," gamers have obsessed over its intricacy, its difficulty, and the fact that it's one of the most fun, memorable video games ever created.

In 2007, it was even named alongside such classics as "Zork" and "Tetris" in the Game Canon, a Library of Congress-inspired list of games that ought to be preserved because of their lasting impact and importance to the medium.

One big addition to the world of "Super Mario Bros." in this third Nintendo Entertainment System game about the two adventurous plumbers (fourth if you count the original "Mario Bros.," of course) was the creation of the airship levels. The continuous scrolling and the need to move quickly, at times, from one side of the screen to the complete opposite side – all while dodging bullets fired from cannons, of course – made for one of the most challenging video game experiences yet, at that time.

Now, Julius von Brunk, of New York, New York – who calls "Super Mario Bros. 3" the "Cadillac of games" – has captured one of the famous airships, complete with Mario and Luigi, in a format most appropriate for video games: Lego blocks (just the latest geeky creation with Legos, mind you).

CNN Geek Out spoke to von Brunk about his creation.

CNN Geek Out: So what is it about "Super Mario" that captures the imagination, anyway?

Von Brunk: When I was 6 years old, the original "Super Mario Bros." game was the first game I had for NES - and since then, I've been true to the franchise up until the era of 3-D Mario games. I still played some of the GameCube titles when they were launched (in fact, Dr. Mario was my chosen Super Smash Bros. Melee fighter), but frankly, nothing can compare to the thrill and replay value of the primary series for NES and SNES!

"Super Mario Bros." was an early platform game with dozens of levels, power-ups, enemies and depth, which made it an ideal universe for me to latch-on to and create many tributes to in my artistic media. The series itself is like nothing else the world has seen previously, with so many original themes and elements - from the music to the game synopsis. Sure, at the end of the day, the games boil down to a standard "hero saves the princess" cliche, but it's the deliverance and originality of the worlds and characters which makes it unique on its own; let's not forget the Lewis Carroll-inspired ideas which went into the original game's creation - which of course is an endless stream of imagination in its own respect!

CNN Geek Out: And what made you decide to create this airship?

Von Brunk: As a child, I was so obsessed with this game, that I began drawing fan art and conceptualizations of building my own real-life version of the Koopa airships. When I realized I was merely a kid with no money - and no engineering savvy, I ultimately scrapped the idea for obvious reasons. Flash forward to my adulthood years, where I have time, money and moderate work space, and behold: a small replica of those airships, but made from more practical means - in other words, the closest thing I could do to actually building a real airship!

CNN Geek Out: How much work went into this?

Von Brunk: The idea of building a giant airship from Lego first came to me in October 2011 some time when I was at a burlesque show, and zoning out whilst thinking of making a "huge" landmark art piece or diorama - to put my name on the map, so to speak. I first messed around with some of the faux-wood Lego pieces I had to see if it was practical and possible to build an entire ship, then as soon as I calculated building costs and made some primary sketches, I immediately ordered hundreds and hundreds of reddish-brown pieces. Next I built some small mockups and test ships later in November, then went into production with the finalized ship itself throughout December. The ship was "done" and table-ready by January, minus a few details, such as the metal girders, the clear stanchions, the electrical components, the anchor and such. All in the all, the total time spent was basically every weekend from November 2011 – February 2012. And just a little side note: the elaborate method of having the side panels riveted (which resemble logs) and facing sideways - as the ship's floor faces upwards actually took quite a long time to engineer - and when I stayed up all night one Saturday in November, the solution to making the ship's sides actually came to me as I was drunk! By the time I was sober (and awake) the next morning, I discovered a small mockup of the ship's side panel rivet method on my bed, which I apparently completely figured out and built after several beers!

CNN Geek Out: How many Lego sculptures have you made?

Von Brunk: I've been working with Lego throughout my life as long as I can remember - hence my two Lego mini-figure tattoos (of a Castle forestman and a Space Futuron astronaut)!

However, I've only been making refined, serious dioramas/projects since early 2008 some time, when I began using my master collections for online displays and exhibition. Prior to that (in my preteen to adult years), I'd merely build sets, models and mini-figures in the privacy of my bedroom, show them to my friends and family, and then immediately dismantle the projects when I felt like building something else. Those early projects were almost never photographed nor documented. My Tumblr page has most of my best "polished" work since 2008, and leading up to my recent work today.

CNN Geek Out: Why do you think Lego sculptures have taken off lately in nerd culture?

Von Brunk: In my opinion, the advent of the internet - which includes (but isn't limited to) social media, blogging, digital cameras, and auction websites almost certainly created a large boom in Lego-related art as a medium.

Back in my younger days as a builder (the early-mid 1990s), making an MOC (my-own-creation) literally meant using a 35mm camera to get some wing-and-prayer shots of the models you built, only being able to use parts available in stores at the time, getting your mom to develop the photos at the grocery store film-dropoff, submitting them to the Lego Builders' Club magazine, and hoping to get featured. Nowadays, with such technology as reliable cameras, imaging software, Lego fan sites, and LEGO pick-a-brick websites (notably Bricklink.com), builders such as myself have infinite resources and abilities to share our work with the world - in addition to acquiring virtually any specific Lego piece ever manufactured. Based on this, amateur builders and rookies can feel inspired by our work, and subsequently make their own creations to display for feedback and criticism; this alone more than likely caused hope and aspirations to those unaware previously, hence the fandom.

I mean, when I was 11, if I wanted a rare piece for custom model, I'd have to hope I'd get a specific model for Christmas and extract the part - nowadays, I can simply log into Bricklink, search for an individual piece (by year, size, color, or type) and order as many available from a vendor! This technology more than opened the doors for aspiring builders and veteran brick-craftsmen alike - comparable in the same sense that YouTube and Facebook have given an edge to indie musicians to whom would have to pass out demo tapes to record managers about 15 years ago.