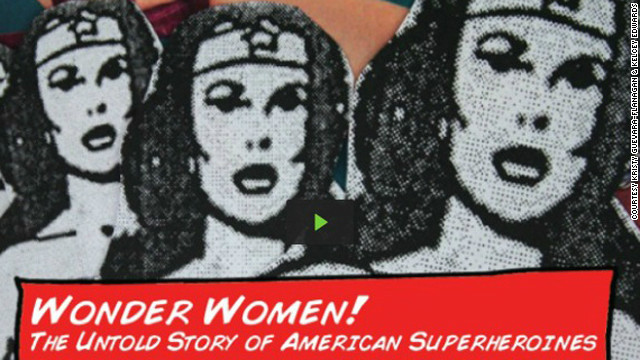 Guevara-Flanagan talked to Geek Out! about the documentary and why society still struggles with superheroines.

Geek Out: What inspired the film?

Guevara-Flanagan: We have been working on the film for over three years. I remember a few years ago reading an article about Gail Simone, who was writing the “Wonder Woman” comic at the time. I was surprised to discover that she was really the first woman to ever actually pen the super-lady. That really made me think about all the other Wonder Woman-like characters out there. Who created them? Why? And why were there so few of them that seemed really empowering?

Geek Out: What do you think accounts for the lack of acknowledgment of female superheroes in popular culture, and how do their stories mirror the lives of real women at various points in history?

Guevara-Flanagan: I think we as a culture still have a hard time with the powerful female figure. Look at how we cover and report on our female political leaders. Much is made of the way they look, how they dress, their hair and makeup. I think strong women are continually brought down in this way, by focusing on their physicality instead of their real merits.

Female superheroes are treated the same way. They can’t be too butch or they won’t be love interests for the majority of the male readership and hence, too threatening. We like these women to kick ass, but we also seem to need them to be potential romantic figures. And so, they need to dress and look a certain way.

Of course, when the superwomen first emerged in the ‘50s and ‘60s, they were married to other supermen or were related to them. They didn’t even get to exist in their own right. With the women’s movement and other societal gains that came about in the ‘70s, they were finally able to be characters that weren’t birthed from Adam’s rib, so to speak. Today we have some female superheroes, but there still are not a ton. They are sexually liberated but they also tend to be incredibly sexualized in the way they are drawn and how they pose.

Geek Out: What makes Wonder Woman the ideal symbol of the film?

Guevara-Flanagan: When I began, I had no idea of Wonder Woman’s early origins or even that she had been around for as long as she had. She was fairly inspired and inspirational in the beginning and that made sense, since American women themselves were, for the first time, asked to work outside of the home and join the war effort (during World War II). As the women’s movement gained traction again in the ‘70s, she became a symbol of female empowerment, both because of the TV show’s success and because the women of Ms. Magazine heralded her as an icon.

Today, she is mostly that same symbol of strength for women. Many don’t know her real story or mythology, and younger audiences don’t even remember the TV show. It would be nice to see her story come back in a major way, and the fact that there is yet to be a Wonder Woman feature film is crazy to me.

Geek Out: After SXSW, what are your plans for the film?

Guevara-Flanagan: We hope to play at festivals all over the globe and to secure a broadcast deal so we can screen on TV. From there we would really like to do some community outreach: screenings at schools and colleges, panels at conferences about comic arts and women in the arts, and to develop some educational, interactive component online where teachers, parents, young and old can find out more information about the forgotten real and fictional female heroes out there.