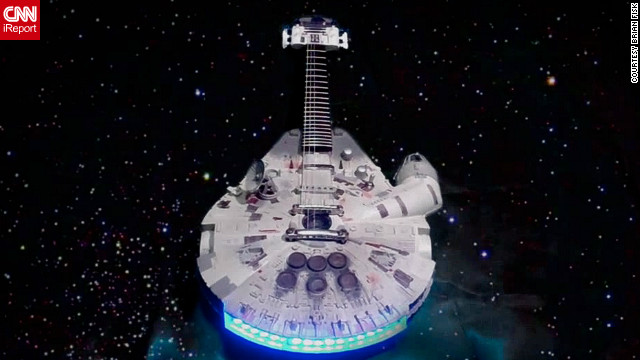 Rocking out with a Millennium Falcon guitar

After kittens and squirrels became Jedi Knights, dogs were made to resemble things found on the planet Hoth, and a Stormtrooper cake was brought into existence, it was only a matter of time before someone created a Millennium Falcon guitar.

In fact, there are quite a few of those people out there. One of them is Brian Fisk, who designed the guitar after Han Solo and Chewbacca's famous ship as seen in the original "Star Wars" trilogy.

CNN Geek Out spoke to Fisk about his homage to an unmistakable symbol for "Star Wars" fandom:

CNN Geek Out: What inspired you to create this?

Fisk: I saw pictures of a couple Millennium Falcon guitars online and decided they were the coolest things I'd ever seen. I knew I had to make one even cooler. The quest to make it cooler inspired the custom made R2-D2 headstock as well as the working sounds and lights. I have a love for music and am a mild "Star Wars" fan so this seemed like the perfect project for me.

CNN Geek Out: Why the Falcon?

Fisk: The Millennium Falcon could outrun any other ship in the galaxy and even though it wasn't beautiful and had some mechanical issues it seemed invincible. I made this guitar from the toy I had as a young child. Many people spent their youth playing with the Millennium Falcon toy and if you didn't have one, it was defiantly the toy you wanted. When you see that ship it brings back memories of hope we had when we were younger, that kind of hope that could fly us away from our hardships and to a galaxy far, far away...

CNN Geek Out: How difficult was the process of building it?

Fisk: It was a challenge to put together. First of all, there is no instruction manual on "How to Build a Millennium Falcon Guitar" and only a few photos from other builds to reference. I spent extra time on nights and weekends for several months to finish this guitar. Almost everything had to be worked out on paper first, then physically constructed, then reworked again because something didn't work correctly.

CNN Geek Out: What have people said to you in response?

Fisk: I have received some great feedback on this guitar including some quotes like "You sir, are a god!" and "I'm ready to propose." My video has received some mixed reviews because of my less than fantastic guitar playing ability and my overlooked spelling errors, but for the most part I think everyone is enjoying the guitar as much as I am.

CNN Geek Out: Anything new on the horizon for you?

Fisk: I've had some suggestions to make a "Death Star" banjo ...

(Check out the guitar in action here.)