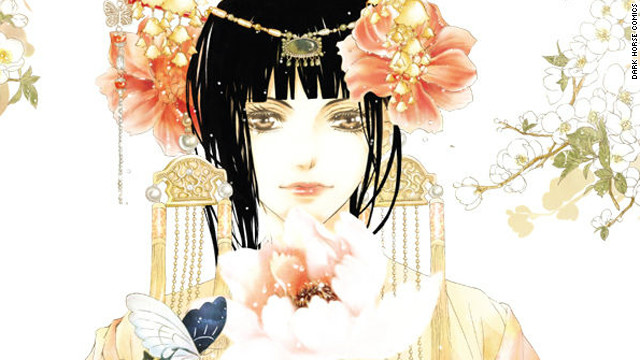 Whereas manga often turns to Japanese mythology for background and stories, manhwa naturally turns to Korean mythology.  There are definite similarities, and modern manhwa has had some influence from manga, but it’s certainly inaccurate to say that manhwa only exists because of manga, as some people have come to believe.

“Korea didn’t open its doors to Japanese culture until the late '90s,” said JuYoun Lee, senior editor at Yen Press, a company where about 30% of its graphic novels are manhwa. “Because of that, manhwa had more of a chance to grow," she said, giving the stories in manhwa a distinct rhythm and flavor.

"In the '70-'80s, kids’ comics got very popular (in Korea), and the magazine market started to emerge as well, which helped growing the market," she said. "In particular, comics for girls – soonjung manhwa – became wildly popular in the '80s and early '90s. It was really after the door opened to Japanese material, though, that the manga/manhwa market reached its peak.”

Eventually, these books began to make their way to the United States. “Tokyopop was probably the first publisher to make a significant push with manhwa in the American market, although I have mixed feelings about the approach they took,” Lee said.

“It was very much a situation where the mentality was ‘everything will sell if we call it manga,’ rather than giving individual works their due. Nothing sells just because you apply a particular label to it; it’s the actual books themselves that matter. I never felt the books were given the individualized attention they needed, and a blanket conclusion was reached that manhwa doesn’t sell as well as manga.”

“If the goal is to place similar content in a single location to make it easier for readers to find and to purchase, then I think the current system makes sense,” Lee said. But even if manhwa is shelved with manga, publishers struggle to make it clear that manhwa and manga aren’t synonymous.

“As we find increasingly more people delve into specific cultural categories, such as Japanese anime, Korean pop, etc., I feel differentiating manhwa from manga would help readers appreciate the cultural similarities and differences in these books from two different origins,” said Soyoung Jung, vice president of NETCOMICS, which sells about 50 series and 250 volumes of manhwa.

Michael Gombos, director of Dark Horse Comics licensing in Asia, said that his publishing company was the first to sell manhwa as, well, manhwa.  “We were the one publisher (and the only major one, at that) to properly acknowledge that manhwa is manhwa,” he said. Dark Horse sells six manhwa series.

“Manhwa being shelved with manga wasn’t our choice, but the ‘market imperative.’ Given the average size of manga and manhwa, it makes sense to sell them next to each other, but it does not make sense to Dark Horse to sell them as one and the same.”

“Besides their opposite reading directions, manhwa and manga books share more or less the same ‘language’ or ‘grammar’ - the way scenes are presented,” Jung said.  “But I think manhwa’s smaller market share (compared with manga) has been the key reason why the distributors and sellers found no reason to categorize these books separately.”

How well manhwa sells is based on the title and sometimes on the genre.  Lee said "Jack Frost" is the best-selling manhwa at Yen Press, and Gombos said that "Bride of the Water God" sells better than a large portion of Dark Horse's trade paperbacks and graphic novels.  Jung named "Totally Captivated" and "100% Perfect Girl" as best-sellers.

But the specific genre of manhwa that sells the best, Jung said, is "yaoi." It's a genre that is popular with female readers and features young men as each other's love interests.

“Boys Love, A.K.A. ‘yaoi,’ is the only genre that has a solid number of followers, just about everywhere in the world manhwa and manga are sold. Excluding this genre, it all depends on the popularity of the individual title and the name value of its author.” "Totally Captivated," for example, is a Boys Love title.

When Dark Horse first began licensing manhwa, “there wasn’t a lot of education about what made manhwa different, at least in the mechanical sense; one person wrote to us once and asked, ‘Is manhwa what Dark Horse calls flopped (left-to-right-reading) manga?’ " Gombos said.

"Dark Horse did what we could to educate both the consumer and book market (we had several consumer- and distributor-level campaigns), but the focus was just on the word 'manga' at the time, so the response was, ‘Oh, so Koreans are trying to do manga,’ when we’d hoped for more of an understanding of something along the lines of ‘Korean comics.’ "