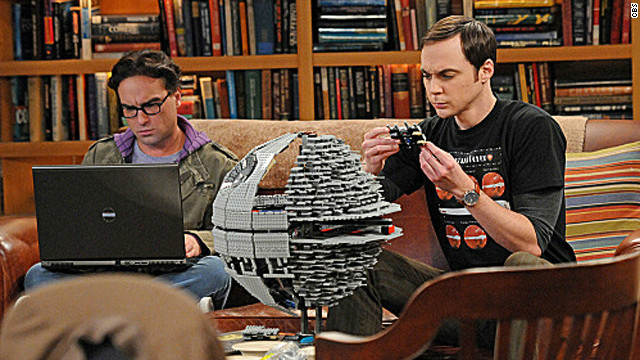 This means that new people are discovering the show all the time, some of whom may originally have been hesitant to watch a show about a bunch of science nerds who collect comic books.

In keeping with the show, Molaro has a theory of his own as well: "There could be some resistance, here and there, from people who are living a geeky or nerdy life, who thought we might be making fun of it or trying to emulate it without knowing what we’re talking about," he said. "But it really does come from a place of love. I’m not a scientist, but I certainly grew up a nerd who was on the outside and didn’t have a lot of friends. A lot of these references come from our personal knowledge."

At the same time (and this being a sitcom, after all), Molaro admits that the show will sometimes have the characters poke fun at each other. "I’d be lying if we sometimes don’t goof on it, but I think people who are nerds who are friends tend to goof on each other as well in certain areas," he said. "I don’t think there’s a need for everyone to love everything geek, and walk in lockstep. I think it’s okay that here and there, as much as we embrace it, that we have fun with it at the same time."

Over the years, there has been something of a split in the nerd community over what to think about the show.

Molaro said, "Mostly we get nice feedback, and sometimes people have specific things they’re upset about. They’re absolutely entitled to those opinions."

At the same time, its supporters are devoted to it, snatching up "Big Bang Theory" merchandise at conventions and elsewhere.

Molaro and co-creators Prady and Chuck Lorre got their first hint that the show was growing a fan base at San Diego Comic-Con in 2008. According to Molaro, Lorre was fully expecting the room to be nearly empty. Instead, they got the rock star treatment (and have every year since): "That was the first time we looked at each other and realized, this might be tapping into something way bigger than we thought it was."

Molaro (who, by the way, prides himself on his "Empire Strikes Back"-inspired Tauntaun sleeping bag) has been with the show since its second episode in 2007.

“I watched the pilot, and I thought, well, that’s pretty interesting," he said. "As a potential writer on the show, I was concerned that I wasn’t going to be able to pitch any science. I don’t have a deep science background. It was hard for me to know how this show would be received. We try to keep it as smart as we can and accessible at the same time. That aspect of the show has paid off."

As Molaro saw it, "The basic idea (early on) was to embrace the science and nerd culture, and try and tap into the element of these characters who tend to feel like they’re on the outside. And I think that’s something that a lot of people who watch the show can relate to, whether they’re one of the ‘cool kids’ or not."

Despite his lack of science knowledge, Molaro said, there are plenty of resources around to make sure the show gets the science right.

"Bill Prady has a fairly deep general science knowledge, along with Eric Kaplan, another writer on the show," he said. "For the hardcore science, David Salzberg, a UCLA physics professor, is on call for us to go over our science and make sure it’s accurate. Sometimes we know the general area of what we’re talking about but don’t know the specifics. Sometimes we literally write ‘science to come’ and have David fill that in for us."

It doesn't hurt that the show's newest cast member is also a neuroscientist.

“We have called on (Mayim Bialik, who plays protagonist Sheldon Cooper's female counterpart, Amy Farrah-Fowler) to help us time to time," he said. "She is very good at keeping her dialogue accurate. On more than one occasion, we thought we had it right and she corrected us, which we were thrilled to have. We want to be accurate, so we’re totally fine to have that happen. We’ve also called her at home on more than one occasion, to say ‘we want a part of the brain that Amy would be looking for,' and she is very quick with those answers."

Molaro said that there are more examples than he can count of stories that were based on actual events. "Without a doubt, every writer has had nerdy things in their lives make their way onto that TV screen in one form or another."

The show's rise in the ratings has been nearly simultaneous with the mainstreaming of nerd culture. "I don’t know why that explosion took place, but it’s been great for the show, that’s for sure," Molaro says.

Even so, being a network show, the creators strive to appeal to the broadest audience possible.

"In every episode, we have come up against wanting to make a deeper, lesser-known, nerdy, geeky reference, and we have to show some restraint because not everyone in the audience is going to get it," he admitted. "We refer to them as 'five percenter' jokes (five percent of the audience will get it). However, as these kind of memes have gone more mainstream, it has made it easier for us to go deeper into those references."

One part of the show that is definitely aiming for the geeks is having guest stars like Wil Wheaton (who has played himself multiple times, as Sheldon's nemesis), Steve Wozniak, George Takei, and astronaut Mike Massimino.

One guest star Molaro would still like to see on the show is Stephen Hawking.

And ever since Sheldon hugged Penny for giving him the gift of Leonard Nimoy's DNA, fans have been clamoring for the "Star Trek" actor to appear, something the producers would also welcome.

However, Molaro warned, "(Sheldon's) head might explode. We may not want that to happen."