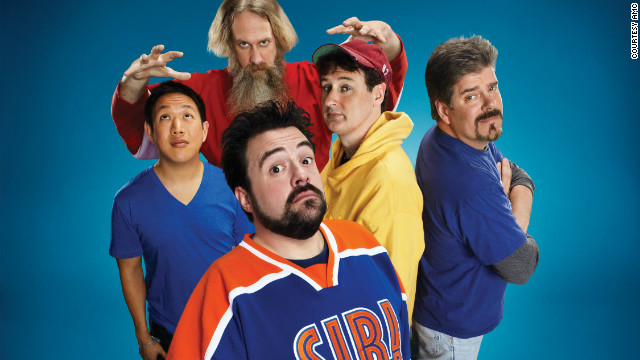 How Kevin Smith learned to love the mainstreaming of comics

“It’s a glorious time to be a geek,” Kevin Smith said.

The filmmaker's new reality series, "Comic Book Men," is set to premiere Sunday night on AMC after "The Walking Dead." The show is designed to pull the curtain back on comic book store culture. Though such a spotlight may be brighter than fans are comfortable with, Smith said it's time for comic book store owners, creators and readers like himself to make a few sacrifices.

“What you’re gonna see is not what I pitched,” he admitted.

Originally, he saw a comic book store version of popular series like the History Channel's "Pawn Stars" in which comic books and nerdy collectibles were priced and sold.

Instead, "Comic Book Men" is about Smith's friends Bryan Johnson and Walter Flanagan, the inspirations for two of his comic book and sci-fi-obsessed movie characters: Randal in "Clerks" and Brody in "Mallrats," respectively.

"It’s like pulling the cover off, and saying, 'Here are the real guys, and they’re way funnier!' "

Responding to criticism about the show's lack of female comic book fans, Smith's response was essentially, "one thing at a time."

Smith expressed hope that we might see that in the future: “At this point, hopefully as change comes slowly, everyone will have their comic book moments."

Smith also acknowledged that the comic book industry itself has a long way to go (a recent survey about DC Comics' "New 52" readers had 93% male respondents).

“Talk to any woman who’s a genre aficionado. They’re still fighting the female body stereotype (in comics). Even the male body stereotype. The stories are predominantly about dudes in capes saving women. Frankly, you find indie comics about stuff that can be a little more personal. But women are still woefully underrepresented. African-Americans are still woefully underrepresented.”

Smith also said that the insular nature of comic book stores is something that has to change for the industry to survive, and he hopes shows like this – despite any misgivings that it exists just to follow any nerd-interest programming trend – will serve as an introduction to potential readers.

“Sometimes, even in our comic book store, there’s an air of ‘What are you doing here? You’re not a regular,' ” he said. "If you go in saying, ‘Hey, I heard about some Superman story on the news. Can I get that issue?' you’re not welcome with open arms, generally. It’s like you’re a carpetbagger."

Comic book stores are like the doomed Klingon Empire in "Star Trek VI: The Undiscovered Country," Smith said: Time is running out.

“We can’t be so exclusive, turning our noses up at people who don’t know comic books,” he said. "The economy of the industry can’t bear it anymore."

However, big gambles like "New 52" and the death of Peter Parker in Marvel's "Ultimate Spider-Man" seem to be paying off, with increased comic book sales in 2011. Even so, it is nothing like the glory days of the early 1990s.

Despite the ups and downs of the comic book world, Smith is proud that overall, geek culture is living out its own glory days.

“I come from a time where it wasn’t hip to be square, so to speak, before geek culture was embraced the way it is now,” he said.

Smith said that after his planned filmmaking retirement (after the movie "Hit Somebody"), there will still be plenty of geeks left in Hollywood.

“It’s one thing to say ‘I love Batman;' it’s another to make the f-ing best Batman movie ever made, like Chris Nolan,” he said. “There are plenty of geeks, man, and the door’s been kicked wide open. You can’t put this genie back in the bottle.”