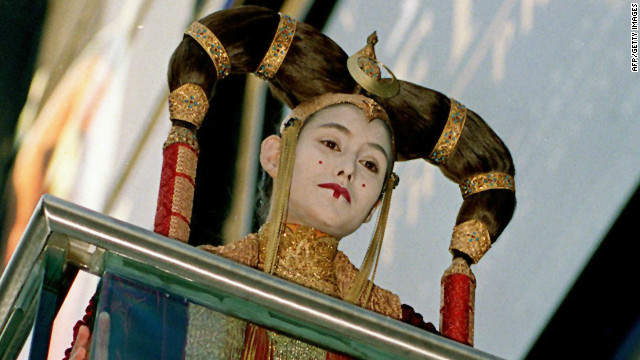 The emotional reaction to “The Phantom Menace” and what it represents speaks volumes about the fierce sense of ownership that hardcore nerds have about the things they love.

Author Henry Jenkins, provost’s professor of communication, journalism and cinematic arts at the University of Southern California, said that particular film stands to this day as a sort of love/hate dividing line and “an open wound” for the original "Star Wars" faithful.

“'The Phantom Menace’ is something the adult 'Star Wars' fans continually reference. It’s something they care about deeply,” he said. “It’s a trauma in the community that they’re finding it very difficult to work around.”

That may sound like hyperbole to some, but for geeks, hobbies are passions. And they take those passions personally.

“I think what makes a nerd a nerd in this context is a social life that revolves around collecting and ranking and discussing cultural artifacts, whether it’s Civil War nerds or "Star Wars" nerds. There is a whole social community constructed around the collective experience of a certain book or movie,” said “American Nerd” author Benjamin Nugent.

“For nerds, books and movies aren’t just pleasurable consumer experiences. They are parts of their identity and social glue.”

Fans at the wheel
In the 16 years that passed between “Return of the Jedi” and “The Phantom Menace,” countless devotees had put their own stamp on "Star Wars" in the form of fan stories and novels, music and adaptations of role-playing games. Jenkins pointed out the 200 amateur "Star Wars" films on the Internet before the curtain opened on “The Phantom Menace.”

Lucas may have technically owned the franchise, but the people had taken the wheel in their own way.

“During that time, fans didn’t stay idle," Jenkins said. "They actually dug in … and extended the universe in really rich directions. So when Lucas comes back, he’s not just competing with himself, he’s competing with this really rich fan culture. It was just an explosion of creativity that Lucas didn’t really control.”

Canon and continuity loom large in geekdom, and elements of the prequels — plus the subsequent alterations of the classic films — upended some fans’ longstanding vision of the "Star Wars" universe. In fan communities that place a premium on mastery, those kinds of perceived deviations can set off shock waves. Look no further than the initial outcry over the DC Comics relaunch last year.

Nugent thinks it was inevitable that fans wouldn’t like the new films. By then, “Star Wars,” “The Empire Strikes Back” and “Return of the Jedi” had become so iconic that returning to that well “came to feel like trying to make a series of sequels to ‘Crime and Punishment.’ ”

And while the computer-generated special effects were dazzling, Nugent said that “The Phantom Menace” was a sort of tipping point where audiences began to realize the limits of digitalization. Lucas’ use of models in the original movies gave them a charm that CGI couldn’t match, he said. Think of the scene where Han Solo whacks the console of the Millennium Falcon, which “looks like the dashboard of a Chevy,” as Nugent put it.

“It gave everything a kind of solidity in those early "Star Wars" movies that you haven’t seen in anything since ‘Terminator 2.’ It’s wonderful,” said Nugent. “It’s the physicality of those special effects that make "Star Wars," in part, what it is. The digitalization is a big part of why the sequels offend so much.”

That reflects the feelings of "Star Wars" fan and TheOneRing.net staff member Kirsten Cairns, who said the prequels were indulgent and more about special effects than a good story. Cairns had been so excited about “The Phantom Menace” that she even wore a pin saying “Episode I” for about a year before the movie came out.

“The fans wanted, I think, to see the origin of the quest we'd all loved. Instead, those origins were twisted, corrupted and indulged in some kind of attempt to make this world have as elaborate a history as Tolkien’s Middle Earth, which only succeeded in messing with what we loved,” Cairns said. “I kind of gave up on the 'Star Wars' universe after the prequels. I was so disappointed.”

In Defense of Episodes I-III
Not everyone views “The Phantom Menace” and its successors with disdain. In 2007, Mary Jo Fox created The Star Wars Prequels Appreciation Society in response to the constant negativity that surrounds those movies. Fox said the anti-prequel sentiment has become a meme that dominates nearly every discussion of Episodes I-III, and that it hampers many adult "Star Wars" lovers’ ability to take a fresh look at the films.

Fox suspects that no movie would have been a match for the titanic nostalgia “The Phantom Menace” was up against. However, she noted that there are old-school fans who love all of the "Star Wars" films. They're just less vocal.

“Some (fans) haven’t liked anything since ‘The Empire Strikes Back’ and believe Lucas is some rich, out-of-touch guy who lost his way. So they looked for things in ‘The Phantom Menace' that proved them ‘right,’ ” said Fox, who co-published a "Star Wars" fanzine in the ’90s.

“Others were so protective of their 'Star Wars' they worried that the new 'Star Wars' was supplanting the old. When I was running my fanzine, I really did get some letters from readers saying stuff along the lines of, ‘I don’t care how good Episode I is, I won’t love it as much.' ”

There’s also a generational dynamic at play. Whatever issues adult fans may have with the prequels, there’s no denying that the newer movies appeal to children. Some of the marketing for the 3-D release of “The Phantom Menace” has been aimed at kids who weren't even born in 1999, but became fans of the prequels on DVD and the Cartoon Network's “Star Wars: The Clone Wars” animated series.

"Star Wars" fan Rebecca Perry, who camped out to see the first midnight showing of “The Phantom Menace” when it opened, prefers the old-school, pre-CGI "Star Wars." However, she understands why the prequels speak to a new generation of fans.

“I think young kids like the appeal of a hero closer to their age,” said Perry, referring to the child version of Anakin Skywalker played by Jake Lloyd. “And maybe that these are their films, and not their parents’. ”

Ultimately, the legacy of Episode I may be how it changed the way "Star Wars" faithful relate to the mythology they cherish and the man who created it.

Jenkins referred to it as the fan/anti-fan dynamic. Anti-fans, he said, are passionately antagonistic toward particular works — and that antipathy is prolonged. “They have a very complicated, emotional relationship to works that hit them hard in ways they probably can’t fully describe.”

In the case of "Star Wars," a person can be on both teams.

“They began as deeply immersed fans and, at some point, they became anti-fans,” Jenkins said. “That’s a combination you don’t see very often. There are very few occasions where someone can simultaneously be a hardcore fan of something and an anti-fan. This one’s been especially intense, I think.”