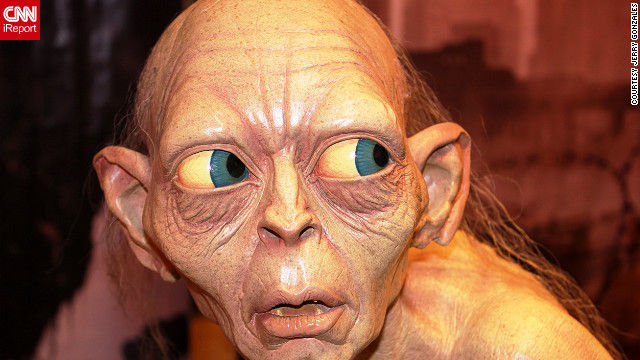 If you ever want to know the difference between a casual fan and a full-on geek, here's a great example (and we've chronicled oh, so many here on CNN Geek Out's Squee).

As anyone familiar with J.R.R. Tolkien's Middle Earth will tell you, there are a lot of complex relationships involved within this universe. Tolkien dedicated stacks of pages chronicling his characters' lineage.

According to nerd proselytizer Chris Hardwick, one thing nerds love to do is obsessively catalog. A perfect embodiment of this notion is now available online, through Emil Johansson of Gothenburg, Sweden's latest project -  an interactive family tree of "Lord of the Rings" characters.

If you want to know how Feanor relates to Celebrimbor, or just want to know your elves from your hobbits and dwarves, this impressively large document can be a helpful resource. It's probably also a great way to pass the time while waiting for the new "Hobbit" movie and should make collecting the upcoming Lego set easier, as well.

CNN Geek Out spoke to Johansson about the project:

CNN Geek Out: What inspired this interactive?

Johansson: I read the "Lord of the Rings" when I was 11 years old, just before the first (Peter Jackson) movie, and I can honestly say I didn't fully grasp the complexity of the books at that point. I dove into the world of "Silmarillion" about a year later and immersed myself into Tolkien's world completely. I was a child with a thriving imagination and I think the project was a result of wanting to have something to do when imagining stories around the different characters.

CNN Geek Out: How often do you go back to Tolkien's work?

Johansson: After I had read the books at age 11 I wanted to read everything there was to read about Middle Earth and there was a time when you'd probably call me obsessed. Now, 10 years later, I reread the books at least once a year.

CNN Geek Out: How long has this process been going?

Johansson: I started on the family tree probably six years ago and finished a paper version. I always wanted to put it on the Web but never knew how until now. I started on the online version in November last year and since there are no complete open source code for doing these kind of things I had to program much of it myself.

CNN Geek Out: What kind of reaction have you received so far?

Johansson: I've had a lot of positive response to the project and received a huge amount of e-mails. There are naturally people who contact me with corrections and suggestions. If there is something I have learned it is that Middle Earth genealogy is complex. Tolkien changed his mind frequently when writing the books. Christopher Tolkien later published books based on his father's early notes, which has created some debate concerning what can be considered true to Tolkien's original intentions.

CNN Geek Out: What has been the most difficult part of the process?

Johansson: Until now, the programming. I am a student in chemical engineering and know very little of programming, so I've had to learn much of it by "Googling." I think what will require most of my time now is correcting mistakes. I have very gladly accepted the help of Shaun Gunner from the Tolkien Society for proof-reading and advising on future updates to the site.

CNN Geek Out: What is it about Middle Earth that has had such a lasting effect on fans, and inspires them to dive so deeply into its history?

Johansson: I think it is because the world is so beautifully well-crafted. Every single time you read one of the books you find something new. It is a whole world with enough information to make it seem real and vivid but also enough mysteries to allow peoples' imagination to run freely. That perfect balance along with Tolkien's passion and attention to detail is what makes his work a masterpiece.

Geek Out wants to know: What beloved fan franchise would you like to see cataloged in such a way? Let us know in the comments.