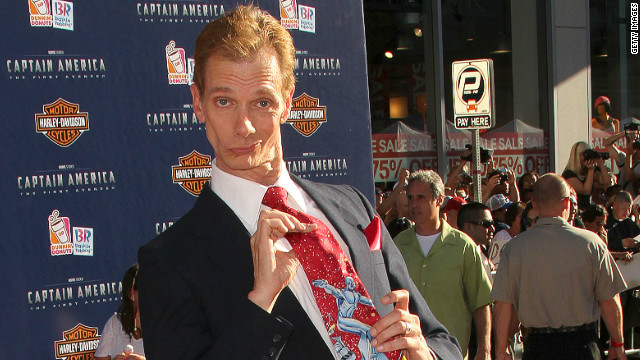 Doug Jones' first fan convention a few years ago was an eye-opening experience.

"I didn’t know this convention scene existed," the actor told CNN Geek Out. "I had no idea it had branched out so much (from 'Star Trek') and become this phenomenon! Oh my gosh, was I opened up to this world!"

Jones' best-known acting roles have been under extraordinary amounts of elaborate makeup. His indelible monster performances, which have been compared to "Phantom of the Opera" silent film star Lon Chaney, afford Jones a busy schedule of convention appearances in between jobs.

Since the late 1990s, he's made memorable impressions  in fantasy and horror films like "Pan's Labyrinth" (as the Faun and grotesque Pale Man,)  both "Hellboy" movies (the heroic fish-like Abe Sapien) as well as the classic "Buffy the Vampire Slayer" episode, "Hush" (as one of the ghoulish Gentlemen). Jones also stepped into less creepy-crawly territory as Silver Surfer (who was voiced by Laurence Fishburne) in "Fantastic Four: Rise of the Silver Surfer."

“I never went to Hollywood saying, ‘I wanna be a monster!’" Jones joked. "I actually (thought) I would be the next big sitcom star."

But at 6-foot-3 and 140 pounds, with a small face, Jones turned out to be a creature effects/makeup artist's dream.

"I had no idea my resume looked so delicious to monster people. The big thing was that I don’t complain in the makeup. That’s why the referrals started happening," he said.

"So here I am known as the guy who wears the rubber makeup. It’s been a 25 year career for me (in fan favorite genres)."

Boris Karloff in ‘Frankenstein’ and ‘The Mummy’ was a great influence on Jones' performances, he said. "It was his eyes. The power of monsters is a phenomenon that I now as an adult have come to grasp."

Jones' fans love monsters, he said, because, "We don’t fit in, we’re the monster in the room and it’s nice to see a monster on film working out those issues."

He also theorizes that watching the good guys in a movie defeat monsters empowers the audience to fight their own personal demons in day-to-day life. And while fans may find his monstrous portrayals cathartic, Jones finds fan conventions humbling.

The opportunity to personally thank the fans who have supported him over the years at conventions is something Jones loves. But one particular fan convention - Atlanta's Dragon*Con in 2009 - had a transforming effect on this creature chameleon.

“I was introduced to steampunk," he said, the costuming subculture that helped Jones find a new aspect of his inner-nerd. "[Seeing] all the goggles and gadgets – it was like, 'what is that?' It’s fascinating, I love the look of it all. I had been in movies like ‘The Time Machine,’ [and love] anything Jules Verne-y or H.G. Welles-y. [It celebrates] an era gone by, I just love it."

Jones has since fully embraced a steampunk aesthetic in a photo shoot for the website "Clockwork Couture," and in Felicia Day's popular Web series, "The Guild."

"I got to wear the best clothes and affect this attitude," Jones explained, about his steampunk group in "The Guild."

"We were too snooty. Real steampunkers wouldn’t do this. We took our coolness and rammed it under people’s nose. We affected fake British accents. When you wear a tailcoat and a waist coat, and a watch chain, and a monocle and a top hat, your posture changes too. Loved it!"

Jones also teamed with Day for his most recent creature role was in the web series, "Dragon Age: Redemption." (See the final episode of that series below.)

"She writes dialogue for actors very well, because she is one," he said. "I got to play Saarebas, a Qunari mage. Those who play 'Dragon Age' will know what I'm talking about. I got to stay in the gaming world with the web series 'Fallout: Nuke-a-Break.' It’s been fun to tap into a new, young [gaming] audience."

Jones credits his background as a mime for making the transition from captivating beast to debonair Victorian dandy and back again so natural for him.

Jones returned to his miming roots with the just-released "Mime Very Own Book," which he described as, "250 pages of pictures of me as a mime. Before you judge me, it’s hilariously funny. The title will tell you how punny it is. It also includes ‘Mime After Mime,’ ‘A Mime is a Terrible Thing to Waste.’ We also send up pop culture, you might see ‘The Mimenator' in there."

And he'll be putting those talents toward embodying alien in this summer's upcoming action comedy, "Neighborhood Watch," as well. “If you think ‘Ghostbusters,’ you’re on the right path," Jones hinted.