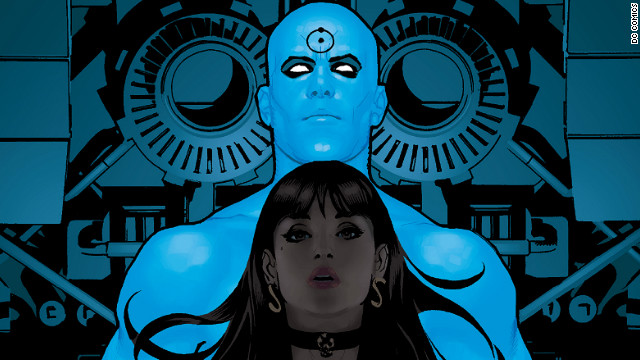 Debate rages over 'Before Watchmen'

It was the second earthquake for the comic book world in as many years.

On the heels of this past May's announcement (and launch in August) of renumbered DC Comics titles, the company (which is owned by Time Warner, also owner of CNN) announced Wednesday a miniseries of books falling under the banner "Before Watchmen."

"After 25 years, the Watchmen are classic characters whose time has come for new stories to be told. We sought out the best writers and artists in the industry to build on the complex mythology of the original," DC Entertainment co-publishers Dan DiDio and Jim Lee said.

Debate erupted on Twitter, other social networks and message boards over this development.

The project, to be written and drawn by big names such as J. Michael Straczynski, Brian Azzarello and Darwyn Cooke, is a prequel to one of the most highly regarded comic book miniseries of all time.

"Watchmen" was named one of the 100 greatest English-language novels of all time by Time magazine. It spawned an extremely faithful film adaptation in 2009. It may have even been quoted in a Supreme Court nomination hearing (the question asked pre-dates the comic).

"Watchmen," with its story of superheroes long past their prime, dealing with a world on the brink, didn't just show the uninitiated that comics could be "literature." It revealed to longtime comic book readers what the medium was capable of doing.

"[Writer] Alan Moore and [artist] Dave Gibbons tested a lot of new storytelling formats in 'Watchmen' that we take for granted now, especially with the book's multiple layers of stories within stories," said freelance writer and "professional geek" Rick Marshall.

"The fact that you can remove various narratives in the book - like the 'Black Freighter' story, for example - and read them perfectly well on their own or in the greater context of the book is fairly unique. And there are lots of other subtle elements of the story that set it apart, and only reveal themselves after you've read it a few times. It approached its subject matter in a way that few others had ever done, with equal parts cynical analysis and nostalgic celebration."

Chris Clements, a comic book collector who hails from Moore's homeland of England, said, "You will struggle to find a reader that won't put it in their top list of graphic novels. I've used it recently to draw people who would normally be interested in the likes of Spider-Man and Superman into comics."

Clements described himself as "cautiously optimistic" about the prequels.

However, the original miniseries is so beloved by readers, the thought of writing more stories has some fans crying foul.

John Mayo – who, along with fellow Comic Book Page podcaster Bob Bretall, read "Watchmen" when it was first released in 1986 – called the prequels an "unwise move," creatively, by DC.

Bretall is conflicted: "I liked 'Watchmen' and will check out the prequel, but don't have a solid feeling that DC will knock it out of the park. I'll get the first issue, but I'm not counting the calendar days waiting for its release."

"It's just difficult to get behind the new line at this point," said Marshall, who plans to read the books, "and see it as anything but a supply-and-demand decision rather than something that adds to the 'Watchmen' universe that Alan and Dave created."

Atlanta comic book reader David Burns admitted that he would pick up the books out of curiosity, as well: "While I'm excited to see more about the past of these characters, I'm also not sure there is a need to revisit the series."

"The original 'Watchmen' left just the right amount of the past to the imagination," he said.

Those opposed to the prequel's release often cite Moore (who was vehemently opposed to the film adaptations of "Watchmen," as well as his "V for Vendetta," among other things) and his feelings about the project. In two words, he described it as "completely shameless." The legendary comics writer told The New York Times, "I don’t want money. What I want is for this not to happen."

On the other hand, Gibbons lent his support, albeit tempered, to "Before Watchmen" in DC's news release: "The original series of 'Watchmen' is the complete story that Alan Moore and I wanted to tell. However, I appreciate DC’s reasons for this initiative and the wish of the artists and writers involved to pay tribute to our work. May these new additions have the success they desire."

Straczynski, who is working on both the four-issue "Nite-Owl" and "Dr. Manhattan" miniseries, posted a lengthy response to fans on Facebook, in which he criticized Moore's reaction.

"Alan himself floated an idea about doing a 'Minutemen' prequel back in 1985," he said. "Alan didn’t walk away from 'Watchmen' for artistic reasons, he walked away over contract language regarding ownership issues. It was a contract dispute. In time that morphed into something else, but that was not what happened at the time."

"One ends up on a slippery moral slope to say that all of these other writers' characters are fair game but Alan’s characters are sacred on a moral or emotional basis."

For his part, Straczynski said the talents of those involved in the project ultimately persuaded him to do it.

"These were, and are, some of the brightest lights in the comic business. (And me, holding up the rear.) Listening to Brian [Azzarello], I frankly thought I should be sitting at the children’s table, not here. And beside me was Len Wein, who was involved with the original 'Watchmen' books. Amazing."

Marshall responded to outraged fans this way: "I don't think there are any books - or movies or music, for that matter - that are truly sacrosanct. A great story will always win out and mitigate any concerns that fans had about the project."

Like many newer fans of "Watchmen," 21-year-old avid comics reader Abbey Wright-Geddes from Northville, Michigan, first learned about the franchise when the movie came out. She immediately devoured the books after seeing it.

"I think 'Watchmen' changed the image of the superhero. We usually see the costumed, buff and handsome superhero saving the city every day and getting the girl. 'Watchmen' showed us the darker side," she said.

She is genuinely excited to read the new stories. "I was sad to find out about the controversy around Alan Moore and how he did not support the idea, but I have faith the comics will provide some interesting background at the least," she said.

One thing on which all seem to agree is that the new stories will almost certainly be a runaway success for DC, at least initially.

"[The original] is an amazing read and sold incredibly well," said Kyle Puttkammer, who owns the Georgia comic book store chain Galactic Quest. "I expect with the creative talents on these new books, they'll be a 'must-read.'"