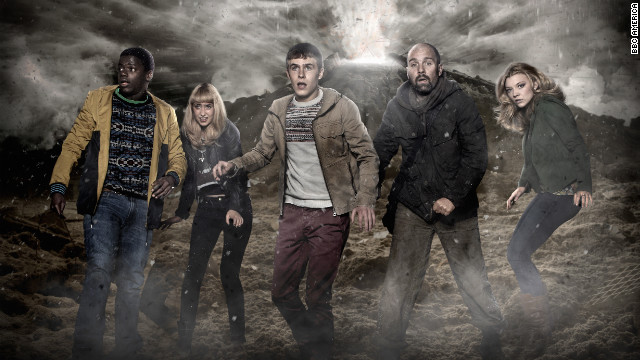 “I was a bit of a lonely high school nerd,” Thorne said. “I didn’t have a best friend, and I always wanted one. I consider the central theme of the show this ‘love story’ between the two boys - a totally chaste love of course, but they really need each other. They’re the only two that have ever been in each other’s lives.”

Paul and Mac’s connection features prominently in the show, and they provide a perfect balance for each other. While Paul is shy, nervous and ducks behind things when the girl of his dreams, Jay, walks by, Mac is full of statistical information and film quotes, and he talks copiously (and loudly) when he’s nervous.

“Paul and Mac have created a world for themselves that only those two exist in, and they’re quite content in that world,” said Iain De Caestecker, who plays Paul. “They’re like yin and yang. There is no sort of worry that if something happens, one of them wouldn’t be there for the other one. I think they just always know they’ve got each other.”

That's good for Paul, who, aside from seeing man-eating ghosts, has regular therapy sessions, reels from his parents’ divorce and endures a cold relationship with his popular twin sister, Anna. Cataclysmic dreams full of ash and run-ins with Fades only further complicate his deeply personal issues.

“You’re scared?” Mac asks Paul. “My only friend is either a lunatic or Heather Langenkamp from ‘Nightmare on Elm Street.’ I’m petrified.”

Paul adjusts to his connection with the Fades through Neil, a character with a dark story arc who can interact with the dead as well. The two have an intricate dance between them that evolves from master/apprentice to balance of power as Paul gains strength and discovers powers he never knew existed.

And that’s when Thorne’s first-hand knowledge of being a nerd really shines through. Even in moments that would send  normal people in the opposite direction, fearing for their lives, Paul runs toward danger because he’s curious - and possibly reading too much Gaiman and Moore.

De Caestecker says he wasn’t a nerd in high school, but he doesn’t remember the period as “the best time" of his life, either. He loved being able to connect to the coming-of-age tale with a supernatural twist and the built-in mythology of the Fades that Thorne created.

“Jack’s writing is quite vivid, and really honest,” he said. “I used a lot of memories I had from when I was that age at school, and going through the normal troubles most adolescents have. This very real character isn’t an archetypal warrior, he’s a guy with real problems.”

It remains to be seen if BBC will pick up a second season of the series, and Thorne knew that when he was developing his characters.

“One of the things I love most about writing television is that in film, your characters develop massively throughout the film, but you always know their endpoints in a weird way. In TV, the way that they change and transform is always extraordinary.”

Thorne hopes to surprise people, and he offers no guarantees about who will survive in the remaining three episodes.

The layered plot lines and diverse characters create a quirky atmosphere that suits this combination of horror, heart and humor. Although Thorne admits that it’s a “slightly slow starter,” episode three, which aired last weekend, tends to hook people.

By the fourth episode, airing this weekend, the stakes get higher. In addition to the fear of losing the ones he loves the most, Paul’s biggest concern is that he may be turning into a Fade himself.

When he heals a cut on Mac’s arm, Mac finds himself momentarily stunned. “Who are you?” he asks Paul.