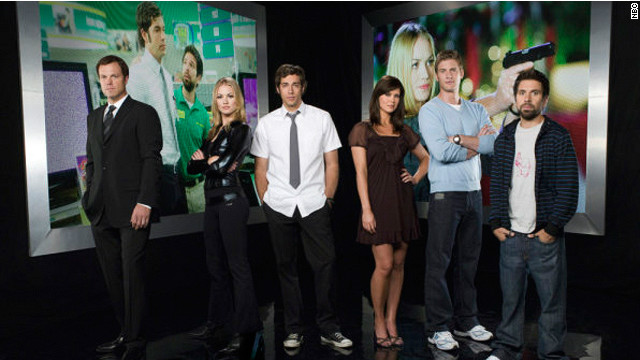 "It was the [first time] I felt that being geek wasn't bad, and I should feel proud about that."

Catia Felix from Lisbon, Portugal tweeted that earlier this week, about the TV series "Chuck." She is one of many fans who have strong feelings about the NBC show, which makes its final bow on Friday night after five seasons.

Those five seasons – about a "Nerd Herder" who becomes a spy, and gets the girl – would not be possible if not for its legion of devoted fans (quite a few of them we spoke to worried that they might get too emotional talking about the show, and they're not alone).

When it looked as though NBC would not renew the show in 2009, Wendy Farrington of Pennsburg, Pennsylvania had an idea for what she could do to save it. She thought like the network instead of a fan.

"This crazy little idea came into my head to visit Subway [a major sponsor] on the day of the second season finale," she said. "It popped into my head and I scribbled the words 'finale' and 'Footlong.'"

She got the word out to entertainment bloggers. "Nothing happened at first, and about a week before the finale, it was everywhere," including Twitter and CNN iReport.

That led to Farrington, practically on a whim, attending her first convention in London, and meeting star Zachary Levi himself. He was so inspired by meeting her that he took an entire "Chuck" panel on a field trip to a nearby Subway: "He put toppings on every single fan sandwich, he sat there for two hours!"

Farrington, who worked on Levi's Nerd HQ back in July, plans a big finale party at New York's NBC Experience Store, coinciding with the end of a charity memorabilia auction.

Fellow fan Gray Jones, who has hosted a "Chuck" podcast for several years, explained one reason why the show inspired such passion, that fans would occasionally go to extreme measures to save it.

"One thing that made 'Chuck' different is that the cast and crew opened their arms to the 'Chuck' fans," Jones said, citing the 120 interviews he has done with them alone.

As co-creator Chris Fedak put it recently to reporters, "I think [it] spoke to people. I think it’s about every man who steps up to the plate and decide to be a hero. But he still remained a good guy, the Chuck Bartowski that people feel in love with in season one."

"It was just the little train that could," Jones said. "Every year, it was entirely likely that it could have been canceled, and the Subway campaign – the way that 'Chuck' fans reached out to advertisers, was very effective."

Both Jones and Farrington said they wanted a finale with emotional closure for the characters.

Members of the cast couldn't thank fans enough for their efforts, and spoke about what it was like to wrap up the series, and what they took with them.

Zachary Levi ("Chuck Bartowski"): "The realization that there's no more 'Buy More,' no more Chuck and Morgan, no more Chuck and Casey, no more Chuck and Sarah. That's heady stuff. It really hit you like a ton of bricks towards the end. I spent more time with that cast and crew than my own friends and family. The last episode, in particular, was incredibly charged with emotion and reflection. I feel like we were able to offer the fans a finale that was fitting of the rest of the series, something that homages a lot to the beginnings of 'Chuck' the show, and Chuck the character."

Adam Baldwin ("John Casey"): "There were a lot of tears shed [by cast and crew] over the last episode. Everyone got to say their goodbyes in character, and in real life. All in all, one of the best experiences of my working life. It was the longest I've worked on a show, and some of the nicest people I've ever worked with. It's something I'll remember."

Yvonne Strahovski ("Sarah Walker"): "The last month felt like one of the biggest emotional roller coasters of my life. It was like breaking up with someone who you've been with so many years. It was like, who will be in my life now? And how the hell do I say goodbye to Sarah Walker and everything she stands for in my life? I knew it would be emotional, I just didn't think it would be that emotional."

Vik Sahay ("Lester Patel"): "I really don't like coming out of character when I'm working, but this season it was almost impossible not to. Every time you did a scene, it was 'oh, this is the last time we're doing a scene here.' The whole season had that feeling of rawness coming. This was a big rite of passage for me. [The cast and crew] were my base and my foundation. As the years go on, I'll realize how critical that was."

Levi: "I took the 'Buy More' phone [home] – not the 'Vicki Vale' phone, but the red phone. I took the 'Last Starfighter' poster in Chuck's hallway. I took the tobacco Indian statue from Chuck and Sarah's apartment, which served no purpose in any episode, but I thought that would be cool to have, to place in my living room, and remind me of this five year journey."

Strahovski: "I will be eternally thankful to the fans of 'Chuck,' and thank them in every interview I do."

Baldwin: "I'd just like to express my sincere gratitude and love and appreciation for sticking with us for five years, and caring about our characters, and embracing Zachary Levi, Yvonne Strahovski, Joshua Gomez and everyone. I like to see nice guys finish first, and that's what this show 'Chuck' gave to these young actors."

Levi: "Thank you for believing in us from the beginning. Thank you for fighting for us since the beginning. As somebody who, ever since he was a kid, this is what he wanted to do, to know that people believe in you and care, and support what you do and want you to keep doing it, it's the greatest thing you can ever ask for. And we got that in spades from our fans."