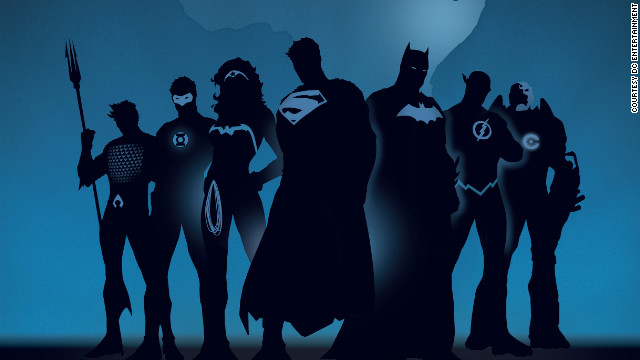 Part of the We Can Be Heroes logo featuring the silhouette of the Justice League.
January 25th, 2012
12:26 PM ET

Diane Nelson is not "technically" a nerd, she said, and neither are many of the people she works with. She's the president of DC Entertainment and she just happens to hang out with comic book royalty, like Jim Lee and Geoff Johns. (So much for the theory that one can catch geeky cooties due to proximity.)

She may not be a nerd, but she runs a company whose media inspires nerdy devotion. And starting this week, DC Entertainment is hoping their characters from "The Justice League" will be a vehicle to educate fans about the very real famine in the Horn of Africa, and inspire them to donate money to the cause.

Time Warner and DC Entertainment have partnered with Save the Children, International Rescue Committee and Mercy Corps in an awareness and fund-raising campaign called We Can Be Heroes, which uses the imagery of the Justice League. For every dollar that is donated to help the aid organizations on the ground in Africa at www.WeCanBeHeroes.org, DC will give a matching donation, up to $1 million per person. (Time Warner is the parent company of DC and CNN.)

The We Can Be Heroes website also offers specially branded merchandise for sale, featuring the silhouette of the Justice League against the outline of Africa. Fifty percent of the proceeds of this merchandise will also be donated.

"Actually, one of my favorite things about this completely insane geek community is seeing what happens when we try to band together to help," said Daniel Dean, a manager for Titan Comics & Games in Smyrna, Georgia, and a frequent Geek Out collaborator.

"See, to me this isn't about 'I like the Justice League, therefore I will help a 6-year-old girl not starve to death.' It's a case of believing in everything people like Superman and the Justice League are supposed to represent," Dean said, "and standing ready and waiting to help so that when an opportunity like this comes along we can jump at the chance."

He likens the initiative to Paul Dini and Alex Ross' comic book "Superman: Peace on Earth," which has Superman spend one day trying to make sure no one in the world goes hungry for one day, instead of fighting super-villains and crime.

"He is ultimately unsuccessful," Dean said, "but his message in the book – that we can all come together to help and educate one another so that we can in effect save ourselves and accomplish what Superman could not – is absolutely something to strive for."

But the special merchandise offered at the We Can Be Heroes website is something of a letdown for fans of Superman and the other superheroes in Justice League, he said.  The silhouette design is not something that directly speaks to a Superman fan's motivation. The dollar-matching is a far bigger incentive, he said.

The initiative is already drawing comparisons to DC's "Heroes Against Hunger" comic from 1986. It's storyline focused on famine in Ethiopia, a Horn of Africa nation. Nelson said it was actually part of the pitch that convinced Time Warner to join the "We Can Be Heroes" initiative.

"It was a single book and not necessarily the greatest narrative we've ever had come out of DC, but there is a relevance to the legacy of addressing famine," Nelson said. "It was that that caused one of the gentlemen who runs one of the aid organizations that we announced as one of our partners to approach our management."

"This is a perfect example where we can make a difference with these characters. There isn't as much awareness of how bad the crisis is and how fixable it is with the right attention and action by individuals," she said.

The comic book industry made a strong and unified response to the 9/11 terrorist attacks, as did the comic book-reading community. In January and February, 2002, DC published "9-11" Volumes 1 and 2 - two comic books that combine short stories and illustrations from some of the best writers and artists from DC, Image Comics, Dark Horse Comics and Chaos! Comics as well as independent creators. The proceeds of the books went to the families of 9/11 victims.

In December 2001, Marvel Comics published the poster book "Heroes: The World’s Greatest Superhero Creators Honor the World’s Greatest Heroes," the proceeds of which went to the Twin Tower Fund. That same month they dedicated an issue of "The Amazing Spider-Man" which featured a black cover and is known as "The Black Issue" to Marvel universe superheroes reacting with shock and sadness to the real-world event of the terrorist attacks. In February of 2008 they published another tribute, the "Moment of Silence" miniseries.

"They were inspirational efforts and for the most part great comics that let fans marry their extant contributions in the wake of the disaster with their favorite form of much-needed escapism," Dean said.

And that seems to be the most public way nerds and fan bases deal with disasters.  In response to the Japanese tsunami disaster, cosplayers and comic book artists put together a fundraiser calendar to aid relief efforts because the anime and video games that inspire them come from Japan. But even nerds obsessed with their pets organize online communities and charity programs for their common inspiration.

The question is, how will nerds react to learning about the hunger crisis in the Horn of Africa?