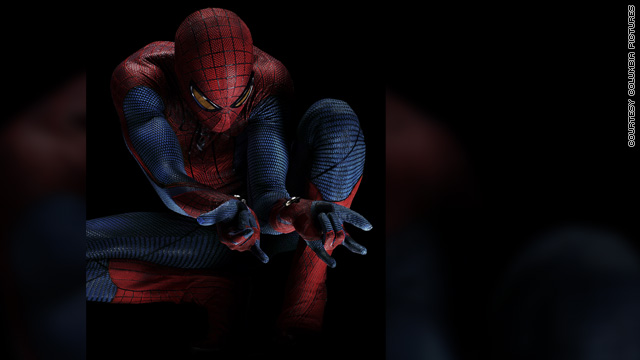 With fan anticipation high for another glance at "The Amazing Spider-Man"  (though the stars didn't have much to say at a recent press conference, director Marc Webb hinted that another trailer for this summer's reboot of the "Spider-Man" movie franchise is on its way soon), there's a chance we may get a closer look at Spidey's mechanical web-shooters in action.

In the original comics, Peter Parker's interest in science and mechanics led to him to create his own web-shooters to go along with his spider-powers (climbing up walls, spider agility and the like). In 2002's Sam Raimi-directed "Spider-Man," Parker's web shooting ability was part of the package. This organic web-shooting power was also briefly given to Parker a few years ago in the comics.

Mechanical versus organic web-shooters has been a hot topic of debate for comic book readers for the past decade. When the new movie's co-star Emma Stone first confirmed that there would be mechanical web-shooters in this movie, many fans rejoiced. (At one point, a fan site called No-organic-webshooters.com existed.)

One reader at Screenrant.com, posted "Organic wasn’t in my comics; don’t want it in my movie, don’t care what this 'PC' world thinks."

Another replied, "It just does not make sense when a teenage kid invents something like that, and it's better if he actually [has] the superhuman ability to shoot webs." (A similar argument was made by a fan on a thread at Newsarama.com.)

A Superherohype.com reader posited, "I hate the whole idea of organic webbing ... plus, it should be under his tongue!" (There's one for the super-scientific take on it!)

Entertainment Weekly has also come out strongly in favor of mechanical web-shooters.

They're not alone. Brian Michael Bendis, creator of the wildly successful "Ultimate Spider-Man" comic book series, told CNN Geek Out that he argued for mechanical web-shooters when he met with many of the people behind the new movie.

"It looked to me like I was a deciding vote about the movie," he said.

"They had a surprisingly high-end meeting of Amy Pascal [chairman of Sony Pictures Entertainment], the producers, director and everyone, and sat me down and pop quizzed me on all things Spider-Man. A big debate was about organic versus mechanical web-shooters. Because I have always been a practitioner of mechanical web-shooters, Amy asked me why you use mechanical web-shooters. I said, because [it showed] the genius of Peter Parker, that he was able to invent these things that he needed. It says who he is, and what kind of person he might have become if not for the spider-powers."

The reaction, said Bendis, was quite telling: "People who agreed with me were banging the table saying, 'Huh? See?' and others were shaking their heads. You could see this was a huge debate. I'm not saying I was the deciding vote, but now that they went with mechanical web-shooters, I felt pretty good about it."

Webb also told The Los Angeles Times that he had a conversation with Spidey co-creator Stan Lee, where the web-shooters came up.

"The web-shooters were able to dramatize Peter’s intellect, and I thought that was really cool," Webb told the Times.

So, does that settle it? Or is there still a good argument to be made for organic web-shooters? Share your view in the comments below.