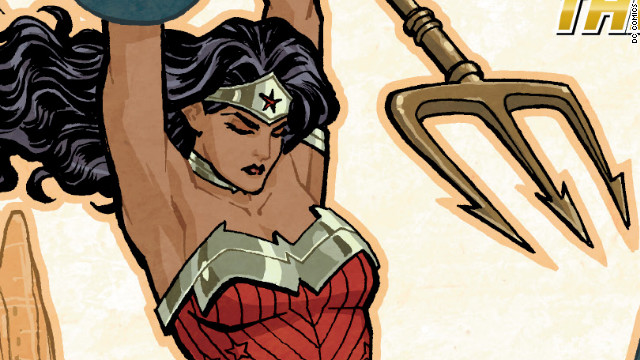 The Amazon Princess spins her golden lasso around me in DC Comics "Wonder Woman #5"!

I want so much for there to be a good "Wonder Woman" comic, but her storyline has often left me wanting. This week’s pick, DC Comics "Wonder Woman #5," by Brian Azzarello and Cliff Chiang, comes the closest so far to changing that perspective.

Talking about "Wonder Woman" with Daniel Dean from Titan Games and Comics in Smyrna, Georgia, led me to the question: Why is this title so hard to pull off?

Dean said, “Wonder Woman is a tough nut to crack for both writers and readers despite her iconic nature and fond memories of her title in years past. Actually, scratch that: She's difficult because of those reasons.”

Wonder Woman has become a bit of a mishmash: Anybody who truly cares about her seems to want a very specific vision of the Amazon Princess, and I've never met two people whose visions completely overlap.

“I certainly have an ideal Wonder Woman in mind, but nobody has ever quite nailed it for me,” Dean said.

Perhaps it's an obsession with fixing "Wonder Woman" - rather than writing and art teams focused on producing awesome comics - that caused her story to remain persistently unreadable. Azzarello and Chiang succeed here because they are doing something different with Wonder Woman - read: not better - and it's rare that a gamble works for this title. END_OF_DOCUMENT_TOKEN_TO_BE_REPLACED