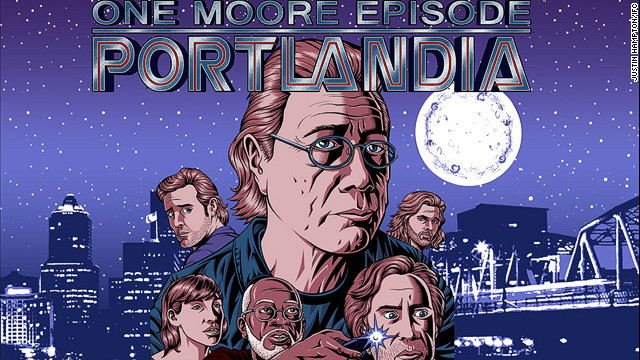 We've all seen it happen. Sometimes, it's years after something we love is long gone.

Yes, I'm talking about friends or family members discovering television shows that many of us have been geeking out about for a long time.

A CNN.com story back in 2010 covered this phenomenon, and it's now been captured brilliantly in this past Friday's episode of the IFC sketch comedy show "Portlandia."

Doug and Claire (Fred Armisen and Carrie Brownstein) start watching a "Battlestar Galactica" episode on DVD, on a whim. After all, some of their friends say it's great, and they just haven't had the time to watch.

Before they know it, they're obsessed, to say the least. Check out part one of the sketch below.

What followed in Friday night's episode involved members of the show's cast, "BSG" executive producer Ronald D. Moore and a certain Doctor. Don't worry - if you missed the episode, it airs again Monday night at 10:30 ET.

CNN Geek Out spoke with series co-creator Armisen (also known for his many years on "Saturday Night Live") about the sketch. (Just like his character, Doug, Armisen is hoping we'll get more "BSG" one of these days, and he's already obsessed with "Game of Thrones.")

CNN Geek Out: What inspired your "Battlestar Galactica" sketch on this week's episode?

Armisen: We ("Portlandia" co-creator Jon Krisel, Carrie, and I) were talking about how people really get into watching a whole season of a show at once. We all do it. Just going from one episode to the next, all the way through. And a show we love is "Battlestar Galactica." It all just kind of came together. We had to juggle a bit to get the cast members all in one place. But it was worth it.

CNN Geek Out Did you get hooked on "BSG," watching the DVDs back to back? 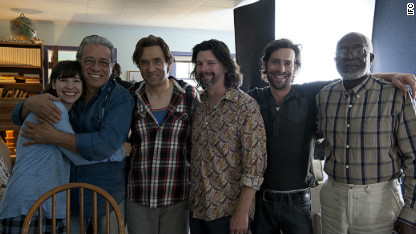 CNN Geek Out: How did you get people involved with the show to participate?

Armisen: We have a very hard-working talent department and production team. It's a lot of moving around schedules. And also, it's the kindness and willingness of the "BSG" cast. They flew all the way to Portland, and taking the time out to go to a different city is not easy, in my opinion. It was so cool of them. And they were great.

CNN Geek Out: What is it about "Portlandia" that makes it the kind of show that can pull off this sort of sketch?

Armisen: I think maybe it's just that there are sketches that are hyper-real. Just a little removed from reality.

CNN Geek Out: Do you think the sketch comments somewhat on the recent phenomenon of people finding a show, that maybe they wouldn't have thought to watch, years after it is off the air?

Armisen: Yeah. It seems to be happening a lot. Carrie keeps telling me to see "Six Feet Under," which I will.

CNN Geek Out: Do you think that Doug and Claire might make a return appearance on "Portlandia"?

Armisen: I hope so!