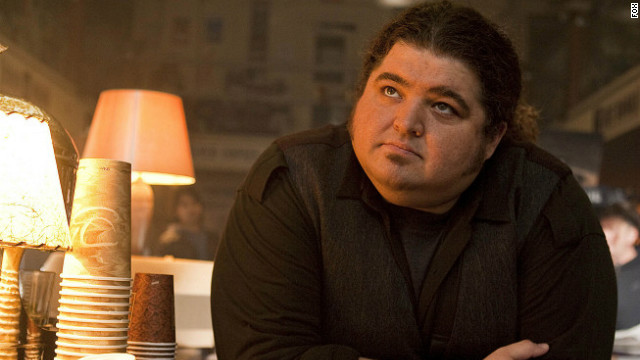 On the TV series "Lost," Jorge Garcia portrayed Hurley, who was something of the voice of all geeks on the show (after all, his first reaction to time travel was to rewrite "The Empire Strikes Back").

On Monday night, Garcia stars in the new Fox series "Alcatraz," as "Doc" Soto, a comic book store owner and expert in the history of the infamous prison. It seems that hundreds of Alcatraz inmates are wreaking havoc in the present day, not looking a minute older than they did when the prison closed (like "Lost," this is also a J.J. Abrams production). Naturally, "Doc" Soto has a few opinions on the matter.

CNN Geek Out recently spoke to Garcia about his new show, the geeky TV he's obsessed with, his favorite comic books and more:

CNN Geek Out: I heard that as soon as you heard that J.J. Abrams was involved with this show, you were ready to sign on right away.

Garcia: Pretty much, just (because of) my history with him. I love the guy, and I do believe he makes the TV that I want to watch. So I was pretty much in from the get-go. He was kind of courting me a little bit, when "Lost" was ending.

CNN Geek Out: Did the subject matter and the mystery/supernatural element make you even more interested in the show?

Garcia: Yeah. I love “The Twilight Zone.” I know J.J. loves “The Twilight Zone.” So, getting to read that first script and see the moment that goes *gasp*! Oh yeah, it’s got that “Twilight Zone” quality to it. That was definitely a big part of the appeal. The end of the second episode gives you a very good “wait a minute” (moment)!

CNN Geek Out: What is it like doing a show with a little more definitive beginning and ending to each episode (as opposed to “Lost”)?

Garcia: With “Lost,” it would sometimes be your job to deliver the “placeholder dialogue,” just to keep everyone on the same page. Like, “We know this, because this happened yesterday, right?”

There are elements of this in a procedural, where there’s certain information that has to get out because we’re putting pieces of a puzzle together... instead of (having) a narrator!

CNN Geek Out: You mentioned that J.J. makes shows you would watch. Are there other shows that you’re obsessed with right now?

Garcia: I got really into “The Walking Dead.” When they started airing new ones, I decided I’d catch up and start watching with everybody. I really got caught up on that, and then it cut off right before the holidays, and (I was) like, “Aww! Now I’ve got nothing!”

I really like “Fringe,” and how that story has evolved a lot. Not to kiss the boss’s butt and all. …

But once (you have) that moment where you find out about Walter going to the other universe because he lost his kid, and how it was (all) driven by that. Really, the whole show took a turn for me, because of the heart in it, and the things you do, because you love someone so much -  that really made it a great show.

You have to focus on that show. There are certain shows I will watch while I’m on my iPad, catching up on “Words with Friends.” But you really have to turn everything off and pay attention to “Fringe.”

I actually ran into Joshua Jackson in an airport and said, “When are the new ones starting?!?”

CNN Geek Out: What do you like most about “Doc"?

Garcia: This is my opportunity to explore a new guy, and I like that this guy is really intelligent.

And, maybe he’s not always the nicest everybody-loves-him guy that Hurley was. Maybe he has a bit of an attitude about something, and doesn’t necessarily want to play the game like Hurley did.

CNN Geek Out: “Doc” is an “Alcatraz” expert and works in a comic book store. Do you think that many fans will be able to relate to him?

Garcia: I definitely think there’s going to be a lot of overlap between fans of “Lost” and “Alcatraz.” They’re not really similar – only in very broad strokes, yes there are elements of time travel, Alcatraz is technically an island – they’re different but they have the kind of things that appeal to that Comic-Con crowd.

CNN Geek Out: Are you personally interested in history?

Garcia: I sometimes like to read nonfiction, not so much history. I like certain conceptual physics (books), and quantum theories. The physics of stuff like time travel is always interesting to me. It gets very heady, so I find that I can only read it in little bits, and then I walk away and stew on that for a moment. And then I go back, and get another tidbit.

I read that “Robopocalypse” book over the (holidays). That filled that little sci-fi need.

CNN Geek Out: Do you have any favorite comic books?

Garcia: When I was younger, I was pretty huge into “The New Teen Titans.” And then, later on, I got into the Brian K. Vaughan stuff. I like “Y: The Last Man” a lot. What I want to get into reading now is the Alan Moore “Swamp Thing” run. I just bought the first trade.

CNN Geek Out: “Lost” had a very special cast. What is special about the “Alcatraz” cast?

Garcia: I feel lucky about this group of actors. Every once in a while, you sit there and go, “Holy crap! Not only am I working with Sam Neill, I can say we’re friends and hang out and can make each other laugh.” That’s cool from a fanboy aspect.

CNN Geek Out: What can fans look forward to on “Alcatraz"?

Garcia: Episode three (next week) is a big “Doc” episode. You see where he’s coming from and what may have inspired this obsession that allows someone to get a Ph.D in studying criminals, and his interest in what makes these guys tick.