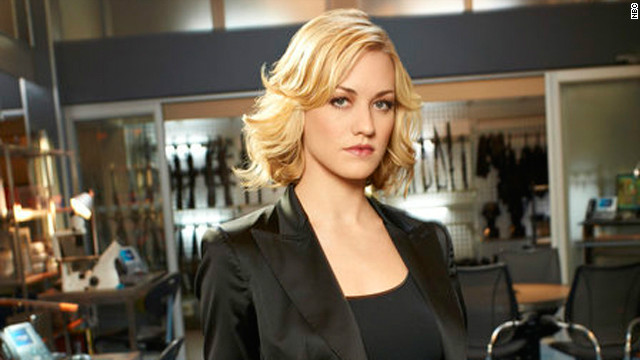 Yvonne Strahovski looks back on 'Chuck,' forward to 'Frankenstein'

When Yvonne Strahovski joined the cast of "Chuck," the Australia native didn't quite know what to make of the show's "Nerd Herd."

“It was definitely a new concept for me, which now I know a lot more about than I did five years ago," she said.

After the first season, she joined the cast at San Diego's Comic-Con, one of her first big exposures to American nerd culture and the already dedicated "Chuck" fan base.

“That first year, I was blown away with the costumes and everything going on. The response was amazing, they’ve been the most loyal fans ever since," she said.

About her four years of going to Comic-Con, she said, “It’s definitely intimidating with a few thousand people staring at you, asking you questions, you never know what to expect. It definitely took some getting used to. We always play a clip before we go up there for the panel. My favorite part is watching the audience watch the clips of the show. On set, shooting, we don’t get to see anyone reacting to it, so it’s always a nice treat for me, seeing that."

One thing that Strahovski will miss about working on the show (with its third-to-last episode airing Friday night) is "ChuckFest," a fundraiser for Operation Smile that offered the cast the chance to meet with fans in a more intimate setting. "We’ve just heard so many stories about people who love the show, families love the show, people can sit down with their kids and watch it because it’s family friendly, and people bond over the show. [The show says to the fans,] it’s cool to be a nerd, and [it] has liberated the nerd nation in a way. There are so many wonderful things we’ve been told."

In this final season, Strahovski's character, Sarah Walker, has been through a lot: She's had a few major fight scenes and was tortured by Brandon Routh's character, Shaw. About that scene, she said, “It’s quite an effort, it’s almost like a workout to sell that stuff. Anything high energy like that is going to have a big impact on you, physically and emotionally."

"Chuck" wrapped production toward the end of 2011, and Strahovski has a big movie coming up: “In a month, I’m heading to Australia to work on ‘I, Frankenstein’ with Aaron Eckhart, and I’m really excited about that."

She described "I, Frankenstein" as "somewhat of an action/romance in a way. The heart of this one is going to be a lot of soul-searching and heart amidst a lot of the action."

She also has two coming movies this year, the comedy "My Mother's Curse" with Seth Rogen (something of a "nerd herder" himself) and Barbra Streisand, while "Killer Elite" with Jason Statham, Clive Owen and Robert De Niro, was just released on DVD and Blu-Ray.

As for the remaining episodes of "Chuck," Strahovski can only say this: “There will be a couple of people who will come back. We sort of get back to the heart of Chuck, and that is the relationship between the characters. I can say that that will become the primary focus leading up to the end."