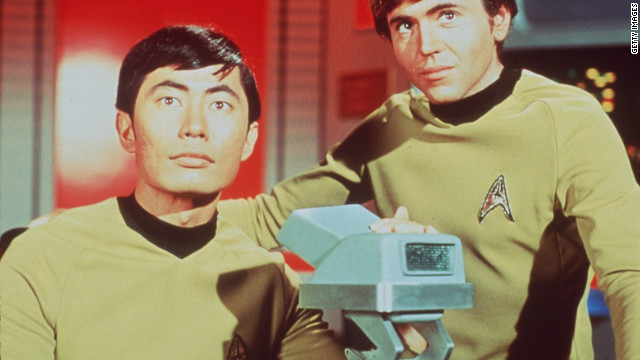 But even during his internment experience, Takei’s ever-present optimism could seek out the bright spots.

“It wasn’t all barbed-wire imprisonment and lousy prison food - the human spirit has to have joy,” Takei said. “Our barrack was across from the mess hall, where they allowed teenagers to put on dances after dinner. I remember hearing ‘Sentimental Journey’ wafting over from the mess halls. They showed ‘The Hunchback of Notre Dame’ and I was in the 18th century via the magic of the movies.

“Those were ways of escaping the barbed-wire fences.”

Takei also walked away with a mission from his father: Raise awareness and be engaged in the political arena. Entertainment and film provided Takei’s escape from the harsh realities of his childhood, and a path to make a difference. Takei not only became an actor, but an activist as well.

Since his time on “Star Trek,” Takei has worked on the board of the Japanese American National Museum, was appointed by the Japan-United States Friendship Commission by then-President Bill Clinton, and now serves as a member of the Human Rights Campaign and East West Players, the nation’s premier Asian-American theater.

He also famously created the “It’s OK to be Takei” slogan, lending his name to the cause after the Tennessee Senate banned the use of the word “gay” in schools.

Since coming out in Frontiers magazine in 2005, Takei married his partner of more than 20 years, Brad, in 2008 and regularly combats sexuality stigmas through social media, as well as his work with the Human Rights Campaign, the largest LGBT advocacy group in the U.S.

Now, Takei is able to wed his two passions, musical theater and raising awareness, in one project: “Allegiance.” The musical, coming to the Old Globe Theater in San Diego this year, chronicles the experience of a Japanese-American family in an internment camp. It is what Takei refers to as the culmination of his life’s work. It isn’t an Asian-American story, Takei reinforced, but an American story.

Telly Leung, known for his recent role on the TV series “Glee,” plays the younger version of Takei’s character in “Allegiance.” Not unlike Trekkers, he says he has always regarded Takei as a role model. The two have developed a symbiosis, playing the same character at different ages.

“George has always been on my radar, especially when you aspire to be an actor, and as an Asian-American actor, he was one of the pioneers,” Leung said. “He was front and center at the height of ‘Star Trek,’ representing our community on a show that was so groundbreaking. He has embraced all of it and found a way to touch people through advocacy, his humor and all of it. It’s quite inspiring.”

The “Allegiance” cast welcomed the chance to work with Takei on the musical. Not only does he provide poignant insight to the extremely personal storyline, but the cast is in awe of his work in musical theater, plays, films – and of course, television.

Co-star Lea Salonga, famous for playing Kim in “Miss Saigon” and singing for both Mulan and Jasmine in “Mulan” and “Aladdin,” tweeted that she was “acting with Mr. Sulu” as soon as work on “Allegiance” began, according to producer Lorenzo Thione.

“George immediately became ‘grandpa’ for everyone,” Thione said. “At rehearsals, he’s bringing stories and people are just hanging from his lips.”

Even when Takei isn’t working on a passion project like “Allegiance,” cast members see him “fired up” on a regular basis whenever he spots inequality, Leung said. When an essentially white cast for the live-action “Akira” film was announced, Takei immediately began online pressure to stop the “whitewashing of ‘Akira,’” said Jay Kuo, composer for “Allegiance."

Takei credits the fame he gained with “Star Trek” with giving him the opportunity to provide a voice behind issues of race and sexuality. But wit is his ultimate weapon.

“He can really push the envelope!” Kuo said. “America is looking for an elder statesman of comedy. Who do they want to be when they’re 70? They’d love to be George Takei! He’s happily married, has fans all over the world, he laughs and laughs, loves what he does, and is a positive role model.”

“Star Trek” fans have also taken notice of Takei’s campaign for equality, and on more than just the “Star Peace” front.

“He is at the crossroads of pop culture and serious issues,” fan Dorinda Paige said. “Takei does a great job of walking the line and getting your attention, because it’s like a trust thing. He manages to build a relationship with fans like me. I’ve never met him and probably won’t, but because he seems that approachable, I will listen to what he says.”

When Takei hears about prejudice against Asian-Americans or the LGBT community, he takes an attitude familiar to any “Trek” fan.

“Bias against them is really baffling, because we’re talking about members of our own family!” Takei said. “Infinite diversity in infinite combinations - therein lies our strength and therein lies our joy.”