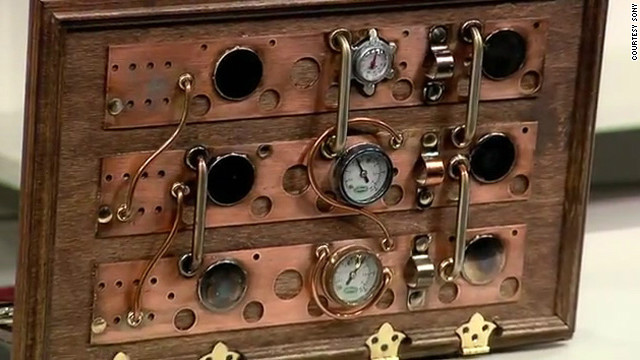 CNN Geek Out chatted (and yes, geeked out) with Leone for a few moments about her new steampunk laptop, and talked about if Sony is really considering more subculture mash-ups in the future.

CNN Geek Out: How did you come up with the idea of the steampunk laptop?

Reena Leone: I’m online a lot, and I’ve really tapped into the geek community. One of the main steampunk artists, Datamancer, had done a steampunk laptop prototype a while back, and there was an announcement over the summer that he was going to start producing them and people could order them and have their own. I had just started working here around that time, and I actually have a VAIO F.

So I was like, "you know it would be really cool if I actually had a steampunk laptop to go with my geeky desk setup I have here." And we have this online show called "SGNL," so I came up with the idea, pitched it, and they gave me the green light to go find someone to do it. I did try to get Datamancer to do it first, but he was slammed with his own line, so I jumped on Etsy to see if I could find an artist who could take on the project, and that’s how I found John Dunn.

CNN Geek Out: Why the VAIO F?

Leone: This is our largest laptop model, so there is more space to work with and more ability to put gears and copper and wood and things on it, so it has more surface area. It’s our super gaming laptop. A lot of people refer to it as The Beast, myself included. It’s quite a powerhouse. When I approached him about doing the project, he went to the Sony store and checked out the laptop first before agreeing to it to see if it would work. And the flat surfaces that this laptop has made it easier for him to attach things, and then he found out the keyboard was backlit, and he had been meaning to try out this idea for translucent keys, so he was really excited about that, too.

CNN Geek Out: Have you seen steampunk incarnations of other tech products?

Leone: Yes, there’s actually quite a community. Even the artist that we used usually does cases for tablets and iPods. A lot of people have also been doing cradles and chargers so they can attach an iPod or MP3 into it, and it has a steampunk feel for the smaller devices that don’t have as much surface area to play with. I go to Comic-Con every year, being here in San Diego, and there is always a variety of crazy steampunk gadgets.

CNN Geek Out: What kind of response have you received since you put out the video featuring the laptop?

Leone: It’s been overwhelmingly positive. I’m actually pretty psyched about it. I know it’s a subculture, but I wasn’t entirely sure how well it would translate originally to the group in general, which is very tech-savvy and gadget-focused. A lot of people have asked if it’s for sale. No, it’s mine! I get to keep this one.

There has been a lot of talk about the widgets from the video, and I got in touch with Dean Beedell, who made them - they’re free Yahoo widgets. He’s been interacting with the community, too, and people have been downloading those. So it’s an easier way, and it doesn’t void your warranty to have that steampunk feel on your own computer.

CNN Geek Out: What did the folks at Sony think about steampunk and modern tech together?

Leone: They thought it was pretty cool. I think they took a leap of faith with me a little bit, just because a lot of time and effort goes into the design of our laptops, so it takes a little convincing when you’re going to alter something that took so much time and thought.

Other than the keyboard itself, the top part comes off. It was only the keyboard that was truly modified. The laptop is fully functional! The keyboard totally works, everything functions the same as the standard VAIO F. I showed them a bunch of examples that helped, and I think they took it on my geek advice that this would be a cool thing to do.

There really wasn’t much hesitation in letting me do the project. I think that’s because being an electronics/tech company, there is definitely an innovative spirit here. I’m lucky to be around a lot of creative people so when I pitch sort of out-of-the box ideas, there is a lot of support, which is great since I’m still kind of the new kid on the block.

CNN Geek Out: Are you planning any other steampunk technology mash-ups in the future?

Leone: We’re talking about it, and it’s definitely a possibility. We might do something with it in 2012. the laptop has traveled to CES, so it’s on vacation right now. That laptop will probably make the rounds, and then we can talk about doing things with other products.

We love old and new. We like to have a sense of history anyway, so doing something like this really fits in.