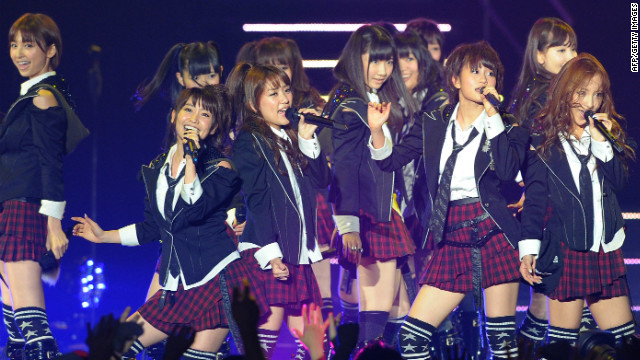 And a fan of anime may one day experience a great surge of joy while dancing around the house, listening to The Pillows. This is how it happens - how you become a J-pop fangirl.

My transformation from a typical anime fan to a J-pop fangirl came in several phases. I started watching anime seriously when I was about 15, but for some reason I never thought about the music outside the show I was watching. I couldn't tell you who did the opening theme for "Vampire Hunter D" or "Urusei Yatsura" ( I know, blasphemy for any serious anime fan), and I don't think I actually looked up a Japanese band until I was well into my 20s.

But that changed when I saw the show that would become my favorite anime of all time. Called "Love Hina," it popularized a genre known as "Harem," which glorifies the male fantasy of being surrounded by more women than he can handle. Because of its tone and approach, the show tends to be fun-loving and lighthearted rather than misogynistic. But more wonderful than the love-polygon hijinks was the opening song.

The song I heard on "Love Hina" is called Sakura Saku, by Megumi Hayashibara. It is the happiest song I have ever heard. It soon became the ringtone on my phone, and every time I heard it, I wanted to get up and dance my heart out until I was too tired to move.

That was the first phase of falling in love with J-pop.

Phase two began much later, after spending years steeped in Japanese culture, including different genres of music. I listened to bands like Omodaka and Gackt, and developed a love of electronica and rock that was passed along to me from friends. Sometimes I heard about new Japanese bands at cons, and other times I found out via word of mouth or because a friend gave me a CD and said I just had to listen to it.

And as my interest in the Japanese music world grew, I kept rooting up new bands, constantly trying find something new to inspire my heart and move my feet. But I could have never guessed where the next phase of my fandom would come from.

In 2008, a friend of mine mentioned that he enjoyed Japanese television dramas - known fondly as J-dramas to the fan community. I had no idea what the J-drama scene was about, but it wasn't long before I sat down to watch one. The opening scene was accompanied by a Japanese pop song from outrageously popular boy band Arashi. Within five minutes, I had two new realizations: I was madly in love with J-dramas, and I was madly in love with Arashi.

The slippery slope of my anime fandom had me falling hard at this point. I quickly and voraciously learned about Japanese pop bands and the mysterious behind-the-scenes factory that churned them out.

For instance, I found out that Japan likes to cultivate both boy bands and girl bands (such as the famous troupe AKB48, which boasts a total of 61 members) when the singers are very young. Even now, it's not unusual to see ensembles like Sexy Zone in the Oricon charts - whose youngest member, Kento Nakajima, is only 16.

The way these bands are developed in America is not completely unlike Japan's practice, but with one difference: American band members are meant to have a good run while they're young, while Japanese bands are built for longevity, often becoming household names. Talent agencies that manage Japanese bands, such as Johnny & Associates, are well-oiled machines, responsible for groups that dominated the Japanese charts.

One of the longest-running J-pop bands is SMAP, a boy band that Johnny's debuted in 1991. Twenty years later, SMAP is still going strong with more than 40 singles and 20 albums under its belt, even though most of its members are now in their late 30s.

I discovered there was something akin to a guilty pleasure in listening to the bands that tended to be featured in J-drama opening songs. Just like American pop music, J-pop was simple, had catchy melodies and lyrics, and possessed an overall appeal that made you want to sing along. It did the job that pop music should.

I admit that sometimes, I still listen to what I consider to be "good" Japanese music. I enjoy it. And other times, I get in my car, turn up the volume to the max, and sing to the cheesiest J-pop music in my iPod at the top of my lungs.

Sometimes, I get funny looks from the car next to me at the red light. I can understand.

After all, I am singing and waving my hands around behind the wheel. I probably look pretty crazy. But I also probably look like I'm having fun. That's what happens when you become a fangirl.