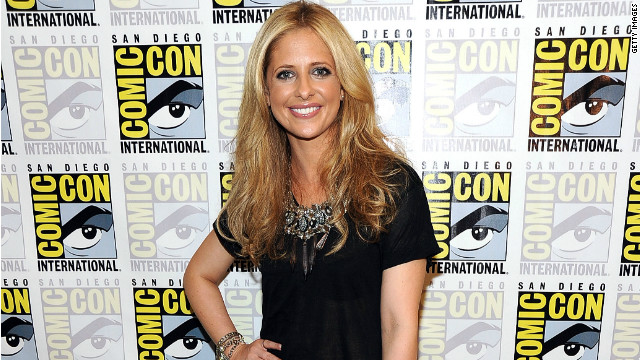 Sarah Michelle Gellar, who portrayed "Buffy the Vampire Slayer" for seven seasons, at San Diego Comic-Con 2011. Gellar told CNN she was not in favor of a new "Buffy" movie, without the involvement of creator Joss Whedon.
December 28th, 2011
02:00 PM ET

One of the most controversial reboots being developed in Hollywood appears to have hit a snag.

The Los Angeles Times reports that the proposed new "Buffy the Vampire Slayer" movie is looking for a new writer.

According to the paper's Hero Complex blog, the script "fell far short of expectations and, in the end, was rejected completely." (That script's writer, Whit Anderson, has not posted anything recent about the project on Twitter.)

Many fans and former cast members of the cult TV show that the movie would be based on haven't exactly warmed up to the idea: Sarah Michelle Gellar, currently starring in the CW series "Ringer," told CNN in May that it was the "dumbest idea ever," because it did not involve series creator Joss Whedon. Alyson Hannigan and others expressed similar feelings.

Whedon himself reacted to it with his trademark wit, expressing mixed emotions.

Kristy Swanson, who played Buffy in the original 1992 movie, on the other hand gave the project her full support.

On Twitter, reactions from fans to the L.A. Times report seemed to be more mixed than they were in the past.

Benjamin Blue tweeted triumphantly, "Victory! Logic has the last laugh!" while @echolalia expressed hope that the report was true.

Others tweeted support to Anderson: @bloggyelf wrote, "My conclusion: you were too good for them. To future success!"

Keith Gow said, "I would have loved to have seen someone else's take on the character."

Tamara Brooks tweeted, "I bet you have great ideas and I look forward to seeing your non-Buffy work in the future. Hope this hasn't scarred you."

As for the shelved script, one anonymous source told the Times, "[Anderson] had reinvented some of the lore and it was pretty cool but in the end there just wasn’t enough on the page." In the meantime, it's back to square one for the new "Buffy," or it could be scrapped altogether.

What do you think of this latest development in the "Buffy" reboot saga? Share your view below.