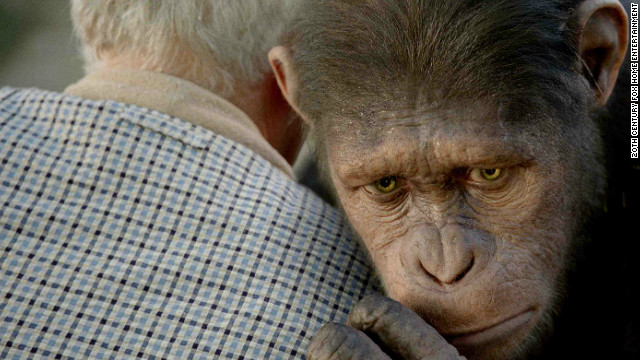 "There was the original 'King Kong' (Letteri worked on the 2005 version of that as well), the Ray Harryhausen films, 'Star Wars.' All of these things start you into a new world," he told CNN Geek Out. "It's a way to allow you to create."

Recently released on DVD and Blu-Ray, "Rise of the Planet of the Apes," a prequel to the much-beloved movie series, was widely recognized by fans and critics as adding a new element to the mythology, much of which was attributed to the effects that created the first "self-aware" ape, Cesar, performed by "Lord of the Rings' " Andy Serkis.

"I think this was a really great way to go back and tell the story that's hinted at in the first films," said Letteri. "In the first film, you've got very human chimps. It's in the future, so the fact that you've got actors playing it as walking upright with human mannerisms and human characteristics - that makes sense. But for our film, you're seeing it from the beginning."

This movie presented a challenge to Letteri: "I think the main thing was the evolution that happens throughout the film. It happens on two levels. You've got Caesar going from an infant to an adult to an adolescent to a full-grown chimp, so we actually see him through three phases in the film. That's new; that's something I've never had to do before."

About Serkis, whose performance has garnered Oscar buzz, Letteri said, "It's a matter of being a really good actor. First and foremost, that's the part that matters. One of the things that Andy has to do when shooting a movie is make all the other actors that are working with him and the director and the crew look at him as if it's Cesar they're looking at before we will believe it as an audience. The way Andy will do that is just project himself as Cesar. That comes through in the way everyone kind of responds. They'd get so emotionally caught up in what he's doing that they respond in like fashion."

Letteri ranks "Apes" among the many breakthrough moments in visual effects during his career, among them a tyrannosaurus rex breaking through a fence in "Jurassic Park."

"(Another was 'LOTR's') Gollum, just because you've got now a living, breathing, talking character performed with other characters side by side," he said. "With 'Avatar,' just creating this fantasy world from scratch. And I think, Cesar, because you're now back in the real world - you're seeing something that's live and organic."

Letteri's current projects include the Superman reboot, "Man of Steel," and a couple of little prequel films called "The Hobbit."

"I think there will be a different look (to 'The Hobbit'). The period is 80 years earlier. But overall, the feel should be the same. We're still going back to Middle Earth, we wanted to have that familiarity to it."