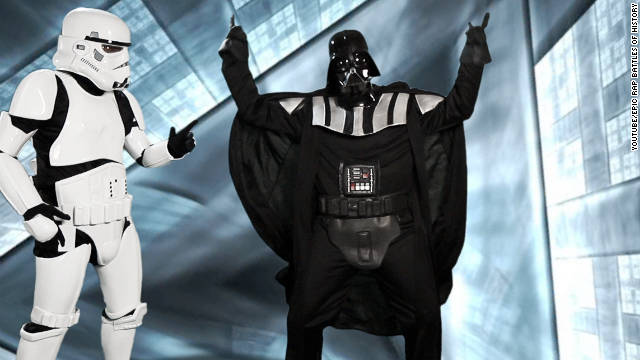 It's not every day that you see actors portraying Darth Vader and Adolf Hitler battle it out, in rhyming form. On YouTube, however, it has now happened twice.

Nice Peter (Peter Alexis Shukoff) and EpicLLOYD (Lloyd Ahlquist) have been delivering these "Epic Rap Battles of History" for more than a year now on YouTube, and the start of their new "season" of rap battles sees a rematch between Vader and Hitler, the first of which received well over 45 million views. (Warning: All these videos include strong language that might be offensive to some viewers). Thus far, Nice Peter and "Epic Rap Battles' " YouTube accounts have a grand total of 360 million page views.

The rematch, with its homage to "Return of the Jedi" intro, already has more than 7 million views. (Again, discretion is advised on these videos, as some may find the humor or language offensive).

These videos are a peek into the epic good-and-evil dynamic that is explored in many favorite fan franchises, not to mention that they poke fun at historical figures, something history geeks enjoy. In some cases, these kinds of exercises (not unlike Spike's "Deadliest Warrior" series,) might also be seen as another way to look at, and get a sense of comfort about, world history.

The idea for the videos happened when Peter, who had found himself with a growing audience on YouTube, and LLOYD, who had been performing a rap show, decided to combine their talents to have historical figures battle it out.

"We free-styled one in my bedroom which was our studio at the time, and I thought this could be a really cool video," said Peter.

Here is more of CNN Geek Out's interview with the pair.

CNN Geek Out: What is it that was inherently funny or intriguing to you when you first thought of historical rap battles?

EpicLLOYD: We've always liked rap and free-styling. Battle rap is something that is inherently engaging and funny because it's based on punch lines about the other person. While battling is confrontational, most times the people battling are doing so just for the sake of the rapping or the show. We thought that the beefs between classic characters would be really funny to hear because you could represent both sides and really dig into an actual point of view that has had some impact on history. It was sort of the best of both worlds, taking what is already awesome about battle rapping and then heightening it with an added context.

CNN Geek Out: So you take requests?

LLOYD: All the time.

Peter: Especially with the early ones – we formed this whole thing with the audience. It was the audience who suggested John Lennon versus Bill O’Reilly. That set the tone as it being anyone throughout history, as long as they have something to argue about. The suggestion of Darth Vader vs. Adolf Hitler, our first runaway hit, really came from the audience.

CNN Geek Out: What's been your weirdest request?

LLOYD: There’s crazy ones all the time.

Peter: We get about 200,000 comments on a rap battle. I can’t put my finger on why we get so many requests, but I think they genuinely feel that they’re part of the creative process, which is true. We have to keep making these and want to keep challenging ourselves. We look through the comments every day. We wonder who could battle Clint Eastwood, and we see a suggestion in the comments. Oh I never thought of that! Thank you, 12-year-old kid in Montana!

And people get confused sometimes as to what makes a figure historical.

LLOYD: Mini-Me vs. the Lollipop Guild, I saw one time. I thought that was pretty funny.

CNN Geek Out: Do you strive to pair up real and fictional figures?

CNN Geek Out: Do you think there is a natural curiosity that causes people to have these sorts of debates about people from different pop culture franchises or in history?

LLOYD: I think it's less about having a curiosity between real and fictional characters, but more about people just naturally grouping things together. Once our fan base understood the sort of "rules to our game", it was easy for them to come up with matchups. People are pretty imaginative, especially young people. They didn't edit themselves by sticking to only nonfictional characters because that would have been less fun.

CNN Geek Out: Do you consider yourselves sci-fi or history geeks?

Peter: If the rap battle requires it. Neither of us knew much about physics going into the Hawking/Einstein battle. We knew it was a cool pairing, a cool matchup that appeals to a section of the Internet who appreciate science and mathematics. We dove into it as much as we could, found out about Einstein and talked to people about Stephen Hawking. If we’re not fans of something before we start writing a rap battle, we’ll become fans of it to facilitate that. We had a crash course on "Star Trek."

CNN Geek Out: What can we expect with the new season of videos?

Peter: We’re gonna explore new stuff. We’re gonna use the Mario Brothers (vs. the Wright Brothers). Our first two on two. We’re just gonna keep making the kind of things we like to make. I made a pledge to my father to use a Russian character. That will have to happen. There’s a lot of really good rappers from Russian history.