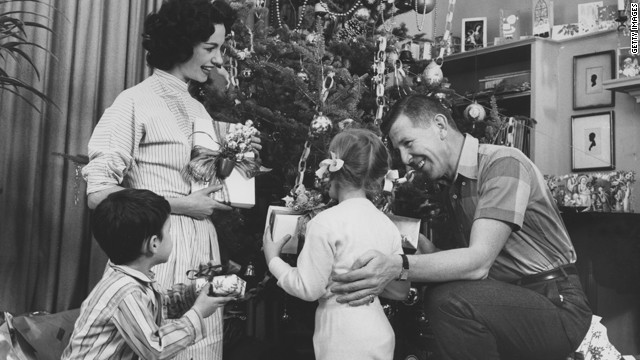 For an emerging nerd, the holidays can be a formative time of year. In the yuletide, when gift-giving is at its peak,  family members and friends see us for the geek that we are, the geek we will become, and embrace us for it.

Even in this day and age, when geek is chic and images of nerds are all over pop culture, that kind of honest acceptance is rare. When loved ones give us gifts that speak to our true nature without attempting to judge or change us, it leaves a lasting impact.

In that spirit, CNN's Geek Out! reached out to a few famous nerds to share their fondest geeky gift memories – and to also share how becoming accomplished members of the nerd herd has affected the kinds of goodies they now receive.

Neil deGrasse Tyson - (Astrophysicist and director of the Hayden Planetarium at the American Museum of Natural History)
“By far, my first telescope. It was a tiny refractor. I was, this would have been 1970, so I was turning 12. … I used it throughout the whole winter. And the difference between that telescope and the telescope most parents buy for their kids, is that I had already expressed interest in the universe. So this gift was feeding a preexisting urge. Often, a lot of hopeful and wishful parents buy the chemistry set or they buy the telescope or the microscope on the expectation that the child will then show interest in it. I don't know how successful that tactic is.”

“Now, people see that I have a lot of ties that are cosmic. What they don't know is that I have an aesthetic threshold, below which I will not drop. They just think, 'Oh! A novelty cosmic space tie!' My threshold is that I have no hardware on my ties. I don't have the Starship Enterprise. That's not on my tie. There's no pictures of Spock. People are thinking that that's space and that's fun space, so let's just do it. No. No, it's not.”

Ashley Eckstein - (Founder of Her Universe, a clothing line for female geeks; “Star Wars: The Clone Wars” voice actress)
“When I was a girl, I was not into Barbies. Instead, I got the He-Man and She-Ra playset, the castle, the whole shebang. And my brother and I would play with it. I was so excited. Forget the Barbie Dream House, I wanted He-Man and She-Ra. I got a Karate Kid uniform as well. I was really into the Karate Kid. That was where it was at for me. I cherished that Karate Kid uniform – including the headband. So, when time for school pictures, I would not wear a dress, and would not wear anything girly. I wore my Karate Kid uniform for my school pictures.”

“One of the best ‘Star Wars’ gifts I've gotten was a Hallmark Ahsoka ornament (the character she voices on ‘Clone Wars’). Hallmark came out with an Anakin and Ahsoka; they were two separate ornaments that came in the same box, and Hallmark sent me one. They had no idea how much that meant to me. I actually talked to them later and said, it was so nice because I also bought one and sent it to my dad. At that moment, I think I had finally made it, in my dad's eyes.”

Sam Huntington - (Actor, “Being Human,” “Superman Returns”)
“Remember Sega Game Gear? It came out a little after the Game Boy. It had a color screen with lots of games, and it was just awesome. I wanted one so bad. My mom drove me to the electronic store to buy one on my birthday. I get there and the chick working there comes up and goes, ‘Hey, so I'm so sorry. We got a whole shipment of Game Gears in but they were all defective so we had to send them all back.’ So in the middle of the store, I literally crumble. I was dying. I was too old to be as upset as I was. I don't think I actually cried but I was visibly, wicked upset. My mom felt so bad. My mom had called the store ahead of time and told them to make up this lie, this ruse, to get me. My mom was going to take it through to getting home but felt so bad that she ended up giving it to me in the store.”

“I recently went to this, Metropolis, Illinois, Superman convention. In Metropolis, there's a giant Superman statue in the middle of the town, and it's this crazy thing. This guy gave me a pop art painting of me as Jimmy Olsen. When he gave it to me, I was like, ‘This is so cool.’ I bring it home, thinking it is so cool. And my wife looks at it and goes, ‘What do you want me to do with this? It’s a picture of you; you can't put this up.’”

Dr. Leroy Chiao - (Former NASA astronaut and commander of International Space Station Expedition 10)
“When I was probably 8 years old, 9 years-old, in addition to building models, I was always fiddling with wires and lights and switches and playing around building. Back then, electronic kits were quite popular. You could solder these little kits together, and make radios and stuff like that. I was always going through batteries, so my mom, unbeknown to me, had a friend of hers at work who was a hobbyist build me a power supply. It was one of those grey metal boxes that you can probably still buy. He had built the power supply that you can plug into the wall and you can change the voltage of what was coming out. It had two meters, a volt meter and an ammeter. That was just the coolest, geekiest gift I think I've ever gotten and I still have it.”

“As for recent history, probably the most memorable or gratifying Christmas gift was when I was in space. We were on the international space station at the end of 2004 and the previous crew, the Expedition 9 crew, had gotten into our food. And so we had a food shortage. We had to ration food for about four to five weeks and ended up losing about 5 to 10 pounds each. Then, on Christmas Day in 2004, the resupply ship arrived and we got a new load of food and goodies. So that was a very nice Christmas present.”

Todd McFarlane - (Comic book creator; founder of McFarlane Toys and co-founder of Image Comics)
“One Christmas Mom and Dad gave me a drafting table because they knew I wanted to be an artist. And I got that, probably when I was 16. I used that drawing table literally up until only like two or three years ago. I remember telling people that every page of comic books I've done in my career has been done on this same table, and it's the table Mom and Dad gave me. It sort of was an important gift because a lot parents sort of look at art a little bit down the nose. Even dads, to some extent, say 'Son, you gotta get a real job.' But my mom and dad never  had that attitude.”

“Unfortunately, as you go on in your career, and you get more successful, everybody just assumes you've got everything you want. … That’s why they invented gift cards. I think those are way smarter. If you have any hesitation on what you should be getting somebody, just get them one of those.”

Billy West - (Voice actor, “Futurama,” “Ren & Stimpy”)
“I grew up in the ’50s, and one time my family got this space helmet. There was a TV show called ‘Men Into Space,’ and it had a colonel of the spaceship called Col. McCauley. They had these Col. McCauley helmets and (my parents) got me one and I wore it all summer. I think I was hyperventilating because I was so excited to be Col. McCauley that I forgot you’re supposed to be able to breathe. They didn’t have the cool gear down yet, so they didn’t put air vents in it. You had the sun visor and it just clamped down in this helmet. You couldn’t breathe in it but I didn’t care because I just felt so cool.”

“Now my mom keeps sending me these giant stuffed red M&M dolls (because West is the voice of ‘Red’ in the M&M commercials). Like this is in case I forget what I do for a living? I don’t know what the message is. The law of displacement is wrecking my house. The closet can’t hold anything except these M&M candy dispensers. I told her the company gives me stuff like that!”

Joe Hill - (Comic book writer, “Locke & Key,"  author, “Horns”)
“In my comic, ‘Locke & Key,’ there's a door, the ghost door, with sinister supernatural powers. My ex-wife and a Maine artisan, Israel Skelton, conspired to make a replica of this door for my office; looking at it is like looking at a panel from the comic brought to life. For sheer mind-melting awesomeness, I doubt I'll ever get a Christmas gift to match it (I'm also lucky to have a relationship with my ex that's better than some guys have with their wives – a gift in and of itself).”

“This one time, after a signing, a dude came up to me with a dark, peeling, black leather bag, that reeked of formaldehyde. It had belonged to his great-grandfather, an early twentieth century mortician. He figured as a person who writes ghost stories, I'd love it. I mean, the dude meant well – he really did. But the thing was a big bag of death. Touching it made my skin crawl. As a rule, just because a guy writes horror doesn't mean he wants a scalpel for Christmas. There is such a thing as carrying it too far.”