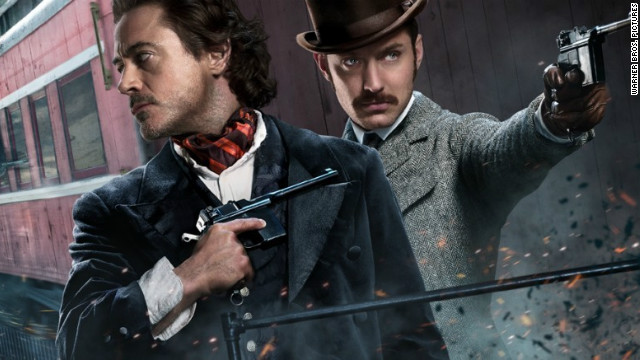 'Sherlock' and 'Hugo' get extra steamy

The first time you look into the eyes of a whimsically lifelike automaton in “Hugo” or watch in horror as the exposed clockwork gears of a Victorian bomb tirelessly turn in “Sherlock Holmes: A Game of Shadows,” you know that some wondrous aesthetic is at work. It is just enough to enchant audiences, and they may not even know what the visual technique they adore so much is called.

Steampunk  is a subtle presence in these films but a strong and pleasing “applied aesthetic,” according to “Steampunk Bible” author Jeff VanderMeer, that works seamlessly in each. It adds wonder while preserving the very human aspects of the narratives.

“It doesn’t have to be a movement of a definitional thing,” VanderMeer said. “But people seem to really respond to that aesthetic, and partly it’s because we have a lot of sleek modern design right now that is relatively seamless. Like an iPod is really beautiful in its own way, but it’s not cathedral beautiful.”

But directors like Guy Ritchie and Martin Scorsese are careful not to give all of the attention to the machines. The subtlety of the steampunk aesthetic is why it works.

“There would of course be the impulse to over-clockwork it, and then you lose sight of the characters and stories,” VanderMeer said. “The best steampunk fiction is still character-based, because the gadgets are part of the society and messages involved, but they don’t overwhelm the characters.”

While the retro-futuristic subculture has appeared in shows like "Warehouse 13" and "Doctor Who" as well as movies such as “Van Helsing,” “The Prestige,” “Wild Wild West,” “Sky Captain and the World of Tomorrow,” "Sleepy Hollow," "The Time Machine," "Lemony Snicket's A Series of Unfortunate Events," “The League of Extraordinary Gentlemen” and many others, both Scorsese and Ritchie are enhancing the aesthetic to heighten their movies overall rather than making steampunk a focal point.

The teasing occurrences of steampunk in Ritchie’s 2009 “Sherlock Holmes” movie were just a taste compared with his latest venture. Everything from the costuming and color schemes to the gadgets and weaponry, as well as a nod to goggles, is cloaked in the steampunk aesthetic without being overwhelming.

“The Sherlock Holmes story predates steampunk, but these updated versions are using more elements, which makes sense because it is a retro-futuristic movement making older stuff reborn using the past,” VanderMeer said.

“In the first film, they had a machine built by Dr. Moriarty which was very much in the mad inventor steampunk mode. It’s kind of an archaic James Bond element in a way. I got the feeling Guy Ritchie was just getting his feet wet with the first one.”

The sheer experience of witnessing the exposed gears of a moving machine draws audiences in, VanderMeer said. It is a new way of interacting with reborn technology.

“Hugo” is whimsical without losing its integrity and remaining faithful to the Brian Selznick book “The Invention of Hugo Cabret.” Everything that happens in the film could easily be rendered in real life.

But its optimism is what makes “Hugo” so charming and seemingly illusory.

“The steam of it, the mechanical doll, was almost a MacGuffin,” steampunk author Emilie P. Bush said. “However, there was a cadence to that film: Scorsese did really well with having that heartbeat of the machine throughout the film. It was both stimulating and relaxing at the same time, a beautiful bit of filmmaking.”

Selznick himself did not set out to write a steampunk book – rather, it was an accident. “The Invention of Hugo Cabret” was meant to tell a touching tale of a young boy who discovers an automaton and the art of early silent films through Georges Méliès.

The first time Selznick heard of steampunk, it was after his book was published and subculture websites began claiming “Hugo” as a steampunk novel. Now, he is thrilled that the steampunk community has embraced it.

“Steampunk to me always seems to imply a little bit more fantasy or something inspired by the Victorian age or Industrial Revolution, but tying modern technology,” he said.

“I wanted my book to feel magical and fantastical, but I didn’t want there to be any fantasy elements in it. Rather than being steampunk, I feel like it is a bit more steam. All of the original elements that steampunk is inspired by are in ‘Hugo’: clockworks, the automaton, the vision of the world as a giant machine. I see those being the elements that steampunk is inspired by and then creates something new and futuristic and unusual with.”

VanderMeer believes the movement itself has “exploded into the pop culture zeitgeist.” Justin Bieber's new video for "Santa Claus is Coming to Town" oddly tries to incorporate the aesthetic, but many in the steampunk community see the directors as "gluing some gears on it," alluding to a popular video of the same name.

Will including steampunk in these popular movies be beneficial or harmful to the subculture?

“I think the jury is out on it,” VanderMeer said. “There’s obviously the possibility of it becoming so familiar that it is no longer has a sense of wonder to it. At the same time, it’s changing and evolving in so many different ways. Hollywood is catching up with where steampunk was a few years back, and there is nothing wrong with that.”

Bush has a similar perspective. “I think a rising tide lifts all boats here. There is great creativity to be had, and in general, steampunk is an optimistic movement. It’s a very loving and supportive subculture.”

Bush also believes that these movies can be a gateway for people who feel stirred by the steampunk aesthetic, or they can simply enjoy it without ever knowing the subculture’s name. Either way, they just might walk away with a good feeling in their soul, and perhaps steampunk helped create that optimistic spark in each film.

In the latest Sherlock film, as Watson and Holmes rumble through the streets of London in a curious buggy car, Watson questions the sanity of driving in such a conspicuous vehicle amongst horse-drawn carriages, quite like steampunk sneaking into mainstream entertainment.

“It is so overt, it’s covert,” Holmes replies, adjusting his driving goggles.