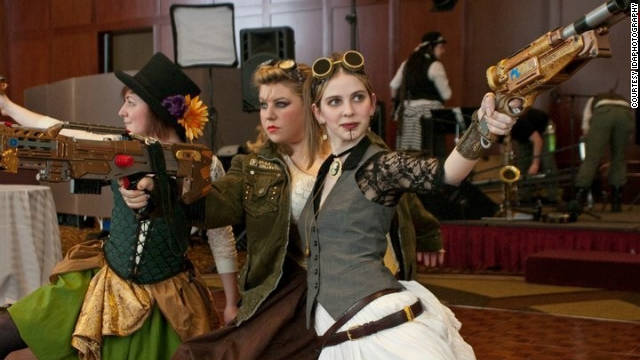 Gadgets are just another cog in the clockwork of steampunk characters.
December 14th, 2011
10:41 AM ET

“I’m working on a project and there’s a point in my head where I’m imagining the mechanics of it,” Willeford said. “My first degree is in physics, so it has to make sense and look like it works. It’s as if I’m making the real thing.”

Willeford grew up in a Victorian house with a “mad scientist” grandfather who was a chemist for DuPont and a grandmother who adored Victorian splendor and design. It’s not surprising that Willeford became interested in steampunk as early as 1988, long before he even knew the term for the subculture.

With the exception of his typewriter key arm guards, all of Willeford’s creations are functional. He is also the author of the first book on how to make your own steampunk accessories, “Steampunk Gear, Gadgets, and Gizmos.” But beyond function, what Willeford and other steampunk craftsmen like him value is the narrative thread that pulls steampunk as a movement together.

“People don’t dress steampunk, they come up with a character,” Willeford said. “You don’t just put on a lovely waistcoat and a top hat – you put on Lady Farthingale’s outfit for hunting on Venus because it’s Velociraptor season.”

Every chapter in his book includes a piece of fiction at the beginning that explains the use of the item. The arm guards are a way to communicate with the crew on your airship, by sending information back and forth through crystal resonance. And mechanical arms become a fashionable badge of honor for Civil War veterans who have suffered through amputation.

Willeford’s own character, Lord Featherstone, is the “evil genius” behind the creations of Brute Force Studios. Sometimes, the gadgets create the characters for these steampunk mad men. Other times, the characters are the foundation for the gadgets. Either way, limitless creativity is intrinsic to both.

For Joey Marsocci, his fantastical creations led to his steampunk character, Dr. Grymm. Marsocci, who grew up fascinated by “Frankenstein” and “20,000 Leagues Under the Sea,” used his training from the California Institute of the Arts to lead art direction on the 20,000 Leagues attraction at Tokyo Disneyland.

Then, he began making machines that were based on the historical brains of Edgar Allan Poe and Amelia Earhart in Dr. Grymm’s Laboratories.

“The machines are supposed to run off of their brains,” Marsocci said. “They teach what the person was about, and offer an alternative version to their life, had things turned out differently. All of the things that I build have a story behind them, and Dr. Grymm is the mad scientist behind it all who would be crazy enough to take the brain of Poe and stick it in a machine and make it come back to life.”

Marsocci is also what he calls a “steampunk artist liaison” – if he can’t work on a project, he sends commissions and recommendations out to his personal network of artists all over the world. This far-reaching steampunk community helps “build a world that didn’t happen into reality” for the subculture, he said.

It is a network that is kind to veterans and newcomers alike.

A relative newcomer to steampunk, Geoffrey Smith was first exposed to it at ConnectiCon in 2010, and it inspired him to start crafting and selling medals, hardware guns and modified Nerf guns through his shop, Thee-Gartisan Works.

Smith incorporates himself and his company into the running steampunk narrative – Smith takes on the character of a Scottish engineer, retired from the British army and running a franchise of the French Thee Gartisan Gunworks out of Scotland among his “gremlins.”

He considers the DIY aspect of crafting character-based steampunk items to be a chicken or the egg question: “Is it that the DIY look to the things we make is what causes it to be appealing, or that it’s pretty much the only way these items can exist?”

But what Smith enjoys most of all is the repurposing of antique items in crafting his hardware guns, which means using lamp parts, bed post finials, plumbing pipe and floral misters to make elegant derringers, rifles, pistols and carbines.

Steampunk clockmaker and owner of Klockwerks Roger Wood can relate to that love of discovering the magic in creating something new out of an old object. He builds extravagant clocks using repurposed antiques and spends half his time tracking down the inspiring pieces that he will use to craft one-of-a-kind clocks.

Long before he knew the term steampunk, Wood was creating his Jules Verne-inspired pieces.

“Why do I like steampunk? I’m a hopeless romantic, and it’s machine bits, gizmos and gadgets, a bit of fantasy and whimsy all thrown in,” he said. “I just took to it like a cat to catnip.”

Besides a love for steampunk before they knew the term, all of these men have a strong common thread: They all know Bruce Rosenbaum, and they’ve all worked together to exhibit their steampunk creations.

In the steampunk community, Rosenbaum is known for his work with steampunk exhibitions like Mobilis in Mobili, Charles River Museum’s Steampunk Form and Function and the Mark Twain Houses’ Steampunk Bizarre (the latter developed by Dr. Grymm). But Rosenbaum is also known for his company, ModVic, which restores Victorian homes, steampunks the interior and combines an antique aesthetic with modern convenience.

When Rosenbaum and his wife moved into a Victorian home with an eye for redesigning it, as he says, “steampunk found us.” After the couple brought in a 1890s cast iron stove and modified it from wood-burning to modern oven, their friends told them they were “steampunking.”

After remodeling their own home, ModVic was soon created to help others turn their Victorian homes into magnificent, functional sculptures of steampunk design. The couple also repurposes salvage and antique items to create steampunk interiors for homeowners and businesses, in addition to disguising modern technology in antique casing.

“People love this because you have these beautiful objects that don’t have a function anymore, but now we’ve given them new life and purpose, so people love seeing those opposites coming together and making something new,” he said.

Trends in steampunk design may come and go, but the aesthetic and ideas will never be abandoned by the subculture that created them. Steampunk is a supportive community for artists, authors and anyone with a creative streak.

“These are the people who feel like they have found their home,” Willeford said.