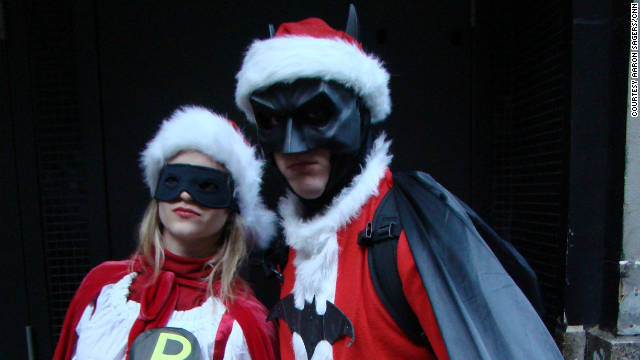 Putting the 'con' back in Santacon

Santacon may have started off using “con” ironically, but at this counter culture, mischief-making costume party the nerds are making themselves known.

The San Francisco Chronicle reported the tradition – initially dubbed “Santarchy” – began in San Francisco in 1994 by The Suicide Club, “a collection of people dedicated to urban adventure and pranks.” When the Suicide Club disbanded, former members formed the Cacophony Society, a San Francisco anarchic performance art group which carried on the Santa antics.

Since then, cities across the world have launched their own variation of the event. Santacon NYC seems to be the best-organized of the gatherings – or as organized as an event can be that is “non-denominational, non-commercial, non-political and non-sensical” and “occurs once a year for absolutely no reason,” according to the event's website. The Santacon mob roams the city supporting charities, spreading cheer, singing naughty carols, consuming copious amounts of holiday spirits and even visiting one strip club.

It is impossible to ignore the irony present in an event initially started to stir up the mainstream by causing mischief – all the while subverting the character of Santa. The origin story of Santacon is just the sort of performance mob art hipsters and hippies alike dig into. This is not the description of a nerdy event.

And yet, at 10 a.m. last Saturday at Manhattan’s North Cove Marina, among the thousands of people dressed as Santa Clauses, elves, reindeer, Jesuses and more, were Santa Neo from “The Matrix,” Incredible Hulk Grinch, a trio of Run-D.M.C. Santas, S.W.A.T. elves, Santa Batman, Victorian Father Christmas, Kurt Cobain Claus, and more sexy variations of holiday tropes than one could shake a candy cane at.

Have the nerds and superfans crashed Santacon? Yes and no.

There is a Christmas nerd subculture, comprised of Christmas fans who indulge in the holiday season yearlong, sort of like post-ghost Scrooge. They may keep an active model of a mini Christmas village in their basement, visit the “Golden Glow of Christmas Past” convention in July and various Christmas shops in August or make the pilgrimage to Mickey’s Very Merry Christmas Party at Walt Disney World in Orlando, Florida. “Santa nerds” are specialized fans of the Christmas culture who collect the ornaments, dolls, action figures and decorative plates emblazoned with the jolly fat man.

Santacon is probably not the right scene for those people, although a form of nerd culture did emerge on Saturday.

The event is a mainstream party with a geek bend. There was a palpable sense of nerdy joy throughout the day’s events. Despite a few slackers who opted for the no-effort Santa hat and beard, a majority of the revelers took pride in their costumes, and others showed appreciation for it. Like a scene out of any nerd con, a couple dressed as hydrogen and oxygen symbols from the Periodic Table of Elements (“H” and “O”), stopped for photos with fans every few feet on Stone Street – as did the man dressed as the Snow Miser from animation trailblazers Rankin and Bass’ 1974 Christmas special “The Year Without A Santa Claus.”

The nerds were drawn to each other by the recognition of the obscure, creative outfits. But the larger community of Claus included the nerds; they moved together, interacted, shared holiday memories and compared notes in typical tribe fashion.

With two starting points, the marina in Manhattan and the Brooklyn Bridge Park, the mass of Santas were fed instructions and destinations through the Santacon Twitter feed that this year led us to at least 10 locations such as the South Street Seaport, City Hall Park, Time Square, carols on the steps of the Public Library, the dance club District 36 and Rick’s Cabaret. And this was before the after party was announced in Brooklyn. There are also suggested rules for Santas to follow, such as arriving on the scene with canned goods for the Food Bank for NYC and patronizing bars that donate portions of Santacon proceeds to Toys for Tots.

Other rules stress being creative with outfits, not being sloppy drunk and tipping.

What’s more, the spirit of Kris Kringle thrived at Santacon. Aside from the mountain of canned goods left at the marina, which was then carried by Santas to marines who loaded them into vans, the singing and affability shown to tourists and children (the ones not terrified by the bearded army) proved infectious. The mood was just cheery, and Santas by-and-large dedicated themselves to honoring the mainstream “goodwill to all” mission of the holidays.

And why not? Santa naturally appeals to both nerds and non-nerds. An immortal benevolent, Santa is a paranormal figure many children are actively encouraged to believe in; he is an accessible religious figure (that we can visit at malls!) who is also available to the secular. Depending on your standpoint, Santa is kind of like Jesus or Superman except he embodies the best of what humans can be (kind, charitable, jolly, nice to animals) with a dash of relatable human foibles (bad eating habits and fashion sense).

Perhaps that is indeed the mini-miracle of Father Christmas; the character encourages all to take part in varying degrees of geekiness. Intended or not, nerd culture emerged at Santacon in a sincere, un-ironic – albeit bawdy – way. And then the nerds got loaded.

Check out more images from Santacon 2011 here and here.