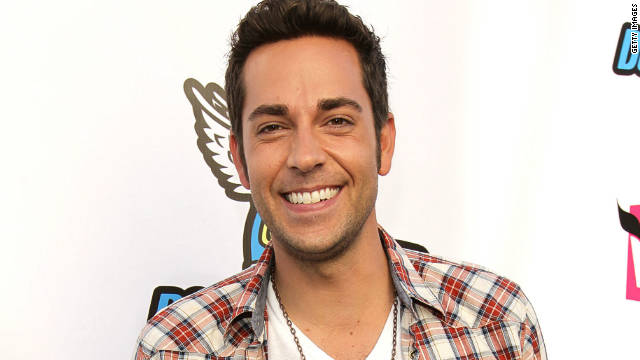 Zachary Levi is not your typical awards show host.

Most awards shows can often be lost in the glitz and glamour of the stars who show up. For the 2011 Video Game Awards, airing live Saturday night on Spike, the star of NBC's "Chuck," and bona fide nerd wanted to make sure this year's VGAs were about the gamers themselves.

"When I first had a conversation with the producers, I said, 'Look, I really wanna make this about gamers and gaming, and be really true and respectful to that world, because I am one," he told CNN Geek Out. "I feel like, in some years past, there's been playing to the stereotype, the kind of dude who's like 'heyyy let's game, I'm a bro,' kind of thing. And there are those gamers out there, but the gaming community is really broad."

In Levi's view, gamers are everywhere. "Essentially, almost everyone in the world games on some level. If you have a smartphone and play Solitaire or Angry Birds or whatever, you're a gamer," he said. "Whether you know or like it or not, you're a gamer now. That's becoming more and more evident as the years go on."

At the same time, Levi wants the awards show to speak specifically to gamers, even down to the comedic portions: "I want a lot of the humor to be inside baseball. The opening sequence video is going to be an homage to a lot of the games this season. But I want it to be smart, funny and something gamers really get. We're doing this for gamers."

Aside from the awards themselves, honoring the best games of 2011, viewers can look forward to news about the next project for Bioware, new trailers for "Metal Gear Solid: Rising," "Tom Clancy's Rainbow 6 Patriots," "Transformers: Fall of Cybertron," and so much more, including "BioShock Infinite," which is also up for an award for Most Anticipated Game.

CNN Geek Out quizzed Levi about his favorite games and what he sees for the future of gaming.

The game Levi is geeking out about now:

"When 'Gears of War 3' came out, I was fully addicted to that for quite some time. Then 'Modern Warfare 3' came out, and I'm at level 63 right now, and I'm kind of a purist so I always go through the campaign first. I never really liked when people go get a game like 'Modern Warfare,' and jump right into multi-player, and skip the campaign. Clearly the programmers took a lot of time in developing the story for that, so you should take the time to enjoy that. So I always get into multi-player late in the game, and get my a– handed to me by a third level prestige already, but it's all good. Essentially every moment I get, I am playing 'Modern Warfare.' Nintendo was also nice enough to send me a Wii so I had a Wii in my trailer, and I've been playing the latest 'Super Mario' title on Wii, the side-scroller. It's simple fun, just running through levels, getting power-up and collecting my big coins."

Games that made him a gamer:

"Super Mario Bros.": "That hooked me. It's one thing to watch a movie, a TV show or comic book, but you have no control over it. As a gamer, I realized at a young age that I have a story that I have a say in. And you get better and better at it. That stuff is just incredibly addictive. As technology grows, so does one's ability to interact in these worlds."

"GoldenEye": "I was never a big PC gamer. I was only a console gamer, so as far as first-person shooters were concerned, I was really introduced to that with 'GoldenEye.' No gamer can really argue, it is what all first-person shooters are built on now. I played that game for years. It was old, but people still played it. When Rare got the license for 'Bond' taken away from them, I felt like that was one of the worst decisions ever, that was nonsense! All the other 'Bond' games just fell flat and didn't have the refined smoothness that 'GoldenEye' had, so it makes me bummed that Rare and Nintendo couldn't come to an agreement. But 'GoldenEye' really defined first person shooters as a genre for me."

"Halo": "It took everything I loved about 'GoldenEye,' and put vehicles in it, and big immersive worlds."

Other favorite games over the years:

"Fable": "I love Peter Molyneux. I think the quirky, interesting worlds he creates are really cool. I love all the 'Fables.'"

"Uncharted": "A fantastic title, and I've loved it since day one. And it's so pretty. This is kind of like the beginnings of a movie-slash-video game, and you feel like you're watching this great movie."

Anything "Zelda": Even 'Wind Waker,' which a lot of people didn't like. I loved it, the cel animation was a fun departure."

"Project Gotham Racing": "I miss it. I thought that was such a different kind of take on racing games. So many racing modes and types, and kudos."

His take on the future of gaming (and his part in it):

"The overall cinematic sense and feel [of games like 'Uncharted'] is really fantastic.

"I'm really looking forward to the new dashboard that X-Box is gonna launch. I look forward to being able to connect with X-Box Live, just with voice commands and swipes of my hand.

"All that just fuels my fire more for making interactive movies and television shows, as opposed to 'Uncharted,' where it's 75% gameplay and 25% cut scenes, I want to do something where it's 75% cut scenes and 25% gameplay. Instead of watching 'Star Trek' and seeing the Enterprise under attack, you get to control the torpedoes and fight back. Or you could opt out of it. To me, that's going to be a step in a direction where it will really blow people's minds."