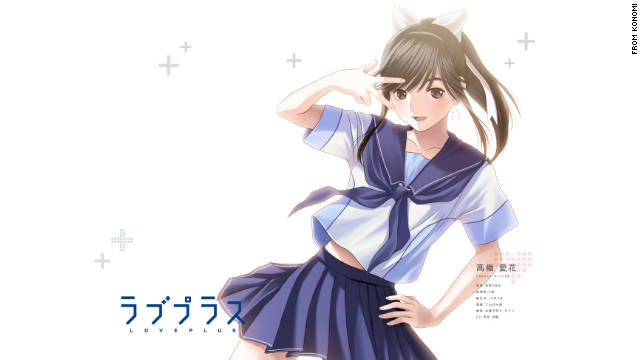 My girlfriend is virtual: An American's experience with 'LovePlus'

In 2009, a game was released in Japan that took the country's gamers by storm. Called "LovePlus," the game was made for the Nintendo DS and allowed the player to take on the role of a male protagonist in a high school setting. Your goal in the game is to interact with young women at your school, befriend them, and get to know them.

"LovePlus" got off to a slow start, but since games of this type (called "dating sims") are popular in Japan, it's not a surprise that it gained steam. However, the amount of steam it gained was pretty major, as it sold over 240,000 units the year of its release. Considering that the average dating sim normally would not break 100,000 units, "LovePlus" was already making waves .. but there was much more to come.

The game got more international recognition thanks to a young Japanese man who chose to marry one of the game's fictional characters. However, very little of the attention was positive. Some American reporters deemed it a "publicity stunt" - people who may not understand that in an otaku world, real love for a 2D character is a perfectly acceptable reality.

Fast forward a few years to 2011, in which a group of American fans worked tirelessly to translate the game's into English. Since I had always been curious about what dating sims were like ( I had played very few since they are rarely imported to the United States or released in English), I wanted to take the opportunity to play the game myself and understand what it was that made Japanese male gamers react with such passionate fervor.

From my awareness of dating sim elements from role playing games such as "Persona 3" and "Persona 4," I had some idea of what to expect, and in the first hours of "LovePlus," I felt as if I was in familiar territory. Your character goes to school, chooses his activities, and has a fair amount of control over which girls he interacts with and how often he chooses to spend time with them.

The three girls you can date are Manaka Takane, a sweet and innocent member of the tennis club, Nene Anegasaki, a mature girl one year your senior, and Rinko Kobayakawa, a less-than-personable library assistant roughly based on a character from Japanese author Haruki Murakami's "Dance, Dance, Dance."

Each of these girls is a classic Japanese stereotype. Takane embodies everything about cuteness that Japan finds so attractive, while Nene represents the slightly older and wise classmate, something that Americans can relate to as being sexy as well. Rinko is possibly the most difficult of the three types for a non-Japanese to understand, as she represents the "tsundere" personality type - a girl who is unfriendly and sometimes hostile to people she doesn't know well, but will thaw over time and eventually show her warmer side.

It was fun to carefully time my studies and after-school activities with spending time with the girls, and it appeals to the part of a gamer that enjoys "leveling up a character." It takes careful consideration in order to do the right things to get a girl to pay attention to you, and a decent amount of effort will have to be poured in before one of the girls will confess. Or, you could try to equally give attention to all three girls and find that in the end, none of them like you quite enough for dating - a faux pas that I committed in my first playthrough.

Eventually though, I got it right, and Nene wanted to be my girlfriend (the same girl that the aforementioned Japanese man married - I wonder if he'll be jealous?). And then, the second chapter of the game begins, in which you begin to make use of the Nintendo DS built-in microphone to literally tell her how you feel about her. With your voice. While the version of the game I was playing had English text, the core of the game is still Japanese. So when you get to this part, the voice recognition only works in Japanese.

The first time I murmured "aishiteru" ( I love you) into the microphone in order to make my girlfriend smile, I experienced a feeling I have never had playing any video game before. It was like a sinking feeling, a realization that I was talking to a girl that was a figment of my imagination. I also realized that while I have often played my DS in public before, that I could never play this game in that setting without wondering how onlookers would react.

In other words, I felt a bit uncomfortable.

It's especially interesting to contrast my reaction with that of the game's dedicated Japanese fanbase. Owners of the game have poured such proud dedication into taking care of their virtual girlfriends that their wives (yes, many of these men are already married) have begun to question whether there is cheating going on - even if the woman in question is not real.

Japan has a history of having a rich life in the 2D universe that includes companionship and romance. It's also worth noting that Japan is a country that has historically had issues with isolation and depression. While it's improved in the last few years, at one time Japan had the ninth highest suicide rate in the world.

Could I play "LovePlus" and fully enjoy it? I did. Even though I had a strong reaction to certain parts of it, I enjoyed its cultural commentary and also the experience of playing something distinctly foreign and absorbing what it had to offer. As a longtime fan of Japanese culture, I can say that there's some part of the appeal I do understand.

In other words, while in our eyes, it may seem like madness to love a fictional character or even an inanimate object, in a society where loneliness is a louder noise than most, reaching for something familiar to love is not so strange after all - to any of us.