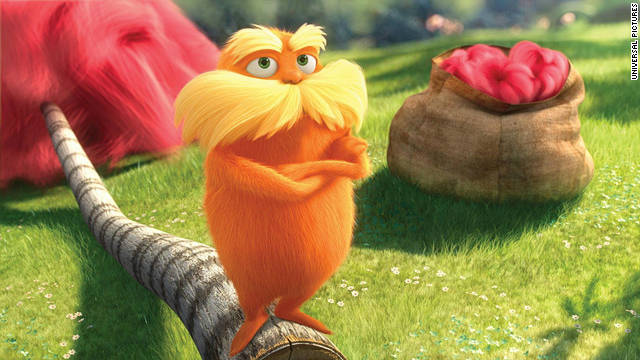 We got a longer look at the film adaptation of the beloved Dr. Seuss classic "The Lorax," and there's a lot more slapstick than one might expect. [Universal/Yahoo! Movies]

"Star Wars Episode 1: The Phantom Menace" is coming back to theaters in 3-D next month (whether you like it or not). [Lucasfilm/20th Century Fox/Yahoo! Movies]

Eight minutes of "Dark Knight Rises" IMAX footage will be unleashed on the public starting December 21 in select theaters before "Mission Impossible: Ghost Protocol." Here's an idea of what to expect. [Hollywood Reporter]

Changes in the new DC universe: Gail Simone is leaving "Fury of Firestorm" as co-writer after the sixth issue; Ethan Van Sciver will join the book in her place. Meanwhile, Steel joined the DCU in this week's "Action Comics" #4. [DC Comics Source Blog]

After some negative feedback from retailers, Dark Horse Comics founder Mike Richardson cleared up what the company called "miscommunication" over the pricing on its digital releases: "We apologize for the confusion and concern surrounding Dark Horse's recent announcement of simultaneous release in print and digital. We want to make it clear that nowhere in our announcement did we indicate that our same-day digital pricing would be less than that of our physical books." [Dark Horse Comics]

The Occupy movement has brought up quite a disagreement between comics icons Alan Moore and Frank Miller. Moore recently slammed Miller in an interview for his blog post railing against the movement. [Honest Publishing/FrankMillerInk.com]

Peter Weller of "Robocop" fame will have a role in the next "Star Trek" movie. Which role is anyone's guess at this point. [EW]

And finally, happy 10th anniversary to Peter Jackson's "Lord of the Rings: Fellowship of the Ring!"