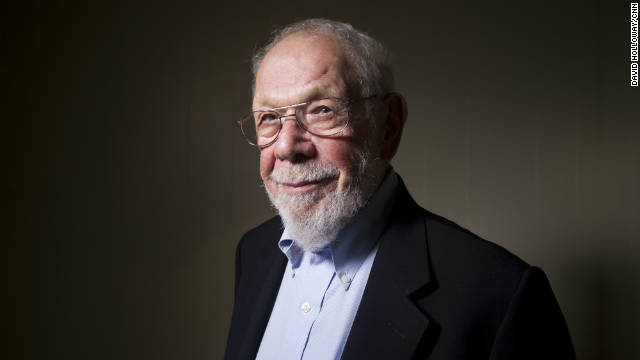 Al Jaffee, the subject of CNN.com’s Monday profile, was asked for his thoughts on some of the other members of the Usual Gang of Idiots. Here’s what he said: END_OF_DOCUMENT_TOKEN_TO_BE_REPLACED

May the geek craft force be with you

Editor's note: Bonnie Burton, geeky crafter and "Star Wars" fan extraordinaire, is the author of "The Star Wars Craft Book." She is a proud member of the geek craft community and presents her crafts online as well as at fan conventions such as GeekGirlCon.

Jedi Masters have to build their own lightsabers. The Doctor created his sonic screwdriver from scratch. Even Cylons, Replicants and Robocops were all projects by crafty humans who wanted to make something extra special. So it's not too far fetched to imagine an extensive community of geeky fans who love to use their crafting skills to make a life-size TARDIS, or a giant AT-AT treehouse or their own Godzilla costumes.

When I wrote the book "The Star Wars Craft Book," I already had amassed a large collection of crafts I'd made for fun, including a Jabba the Hutt Body Pillow, an AT-AT planter, a bean art portrait of bounty hunter Bossk and Mos Eisley Cantina patron finger puppets. But I also wanted to feature crafts such as the Millennium Falcon bed, R2-D2 crocheted beanie hat and a Star Wars T-shirt quilt made by talented fans.

The geek craft community grows faster each day. What was once an underground group of geeks who love to crochet Spider-Man masks or make steampunk ray guns has now turned into a bona fide craft movement full of thousands of geek "craftsters" who converge at comic book conventions, craft meet-ups, science fairs and of course, online. All geek craftsters have their own passion that drives them to make a sci-fi homage from scratch. END_OF_DOCUMENT_TOKEN_TO_BE_REPLACED