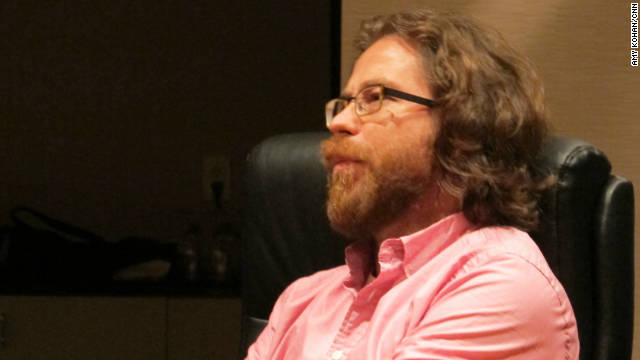 “Geeks can be grown-ups, too,” Storm chimed in.

And geeks do grow up, but they're never too sad, old or irrelevant for a Caribbean cruise. The JoCo Cruise Crazy II (where he and other geek performers will accompany tourists on a weeklong tour of the Southern Caribbean) will set sail this February.

“The cruise is still happening, in spite of all the other things that would satisfy any normal human as Enough Things Happening Already,” Coulton recently wrote on his website, in his usual, cheeky style.

One more thing happening: fellow nerdy musician, They Might Be Giants’ John Flansburgh, (who also produced “Artificial Heart”) will be DJing some dance parties on the cruise. Coulton and Flansburgh are keeping busy in the mean time by making videos for “Artificial Heart” songs.

JoCo: The early years
Coulton was singing from the time he could talk, and played the snare drum in marching band in school.

“From time to time I imagined what it would be like to have a career doing this. Probably by high school, that was my declared intention to everyone,” he said.

At Yale University, Coulton sang with two a capella groups while pursuing a Bachelor of Arts in music. But after college, Coulton moved to New York and became a software developer, writing database software for executive recruiting firms. He “just sort of forgot to be a rock star.”

But Coulton did do some creative projects on the side, including collaborations with John Hodgman (an author and humorist who is probably better known for his turn as a correspondent on "The Daily Show"). In 2003, Coulton released an album called "Smoking Monkey". The same year, he performed at Pop!Tech, where he learned about Creative Commons licensing that would become his standard for releasing music.

Coulton quit his job to pursue his love of music in September 2005. He started a project called "Thing a Week" that would yield some of his most popular works. Beginning September 16, 2005 and ending September 19, 2006, he wrote and released one song every single week. The result: four albums.

Probably the most-beloved song that emerged from "Thing a Week" is “Code Monkey,” about a software developer who hates his job. It's a song that has become a geek anthem. When he wrote it in 2006, Coulton posted on his website:

Yay, monkeys. This is not autobiographical, but I did indeed used to have a job writing software. VB! MS SQL! I affectionately referred to myself and my co-developers as code monkeys, especially when a client asked me a question that I didn’t want to answer (“What do I know? I’m just a code monkey.”).

Another song, the ridiculously catchy “Mandelbrot Set,” has become factually outdated. It assumes acclaimed mathematician Benoit Mandelbrot, who died in October 2010, is “still alive and teaching math at Yale.”

“ ‘Mandelbrot,’ when I perform that live, the joke about him not really being dead, I leave those lines out. I just don’t sing those lines. It just goes “Mandelbrot’s in heaven” and then there’s a little moment of silence, although it is filled with music,” he said.

Despite such geek themes in some of his music, Coulton never sat down to deliberately write nerdy songs. And whenever he’s tried to intentionally write a geek hit, he fails, because it’s not fun, he said. The songs he writes are just what he happened to be thinking about that day; themes he happened to want to explore and talk about.

“I really think that if you’re going to create something, it has to be something that you care about and want to create. It’s a mistake to pigeonhole yourself and target a particular thing because it’s marketable,” he said. “You just have to do what you do.”

“Artificial Heart”
Coulton lost songwriting steam for a few years, but came out of that rut after he opened for a few concerts with They Might Be Giants in March 2010. He also ended up with Flansburgh as an album producer.

“It was very much taking me out of my comfort zone, because it was with a band in a studio with a producer,” Coulton reflected. “I was playing the electric guitar a lot more than I normally do.”

Coulton had a hard time gearing up to write again. The creative process is ultimately painful; there’s a lot of self-doubt and self-loathing that keeps you from getting started, Coulton said.

“Once you overcome it, it is a wonderful experience, but the 90% of it is overcoming that starting thing,” he said.

Besides the more “grown-up” themes, there are some goofball songs, such “The Stache,” about having a mustache, and “Je Suis Rick Springfield,” which Coulton assures us is about a guy trying to convince two French ladies that he’s Rick Springfield.

But don't worry, there's still a bit of nerd on“Artificial Heart.” The album includes Coulton’s two songs from the “Portal” video games: “Still Alive” from Portal 1 and “Want You Gone” from Portal 2.

Coulton’s children know what he does for a living, but he doesn’t make a habit of playing his whole catalog for them. Still, when he was at PAX in August and called to check in on his family, his 3-year-old son asked if he was playing “Good Morning Tucson,” a track off the new album.

And his 6-year-old daughter is a big fan of “Code Monkey."