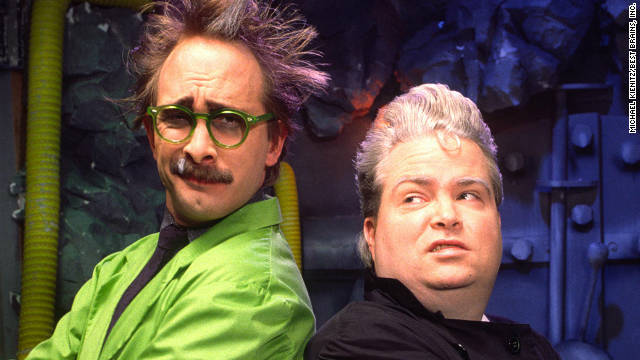 Thanksgiving has a dual meaning for MSTies, fans of the 1990s cult classic TV series, "Mystery Science Theater 3000," or "MST3K."

The show, which took on some of the worst movies ever, mocking them in real time, was at its heyday from 1991 to 1995 on Comedy Central (and again in 1997 on what was then the Sci-Fi Channel). During that time, MSTies looked forward to an annual "Turkey Day marathon" - Thanksgiving Day programming that featured some of their favorite episodes of MST3K.

Now that many of the show's episodes are available on DVD (which you probably own), we're suggesting the five best, so you can have your own, ultimate Turkey Day marathon:

The best-known episode of "Mystery Science Theater 3000" created a mystique around this low-budget train wreck of a movie when it first aired in 1993.

In 1966, a fertilizer salesman named Harold P. Warren set out to make a horror movie, and the result is a complete disaster which seemingly redefined just how bad a movie could be. The (awful) dialogue is badly dubbed, it's horrendously shot and many of the performances are over the top, to say the least. The characters of the Master and Torgo are cosplayed at conventions to this day.

Much of the story behind the making of the movie, and the "MST3K" cast's memories of it, is in the recently-released special edition DVD from Shout! Factory (there is even the raw version, without Joel and the Bots, if you dare to watch).

Straight out of Japan, the giant, flying turtle Gamera became fodder for no less than five episodes of "MST3K" (all of which were recently released on DVD). The fourth episode, "Gamera vs. Guiron," may be the most entertaining, if only for the pair of aliens who appear to have been dubbed inexplicably with Southern accents (oh, and they eat children too).

"MST3K" and bad dubbing go hand in hand, but there was something extra special when the crew took on Japanese monster and sci-fi movies from the 1960s (see "Prince of Space" and "Time of the Apes").

Any MSTie worth their salt can sing along with the "Gamera" theme song the way it was interpreted by Joel and the Bots: "Gamera is really neat, Gamera is full of meat, we believe in Gamera!"

3. "The Magic Voyage of Sinbad"

Every good MST3K marathon needs a good palate cleanser to break up the sheer awfulness of the other episodes.

"The Magic Voyage of Sinbad" truly fulfills the theme song' promise of "cheesy movies." The movie is enjoyable on its own terms (much like other wacky entries, "The Day the Earth Froze" and "The Magic Sword").

It's also a great example on how not to handle a classic character from literature.

It's a perfect target for "MST3K," but it's also not so horrible as to be borderline depressing, like a couple of the others on this list.

This episode premiered during a Turkey Day marathon, which was hosted by Adam West. West also starred in this movie, overacting all over the place.

It is easily the worst 1980s straight-to-video Canadian movie about voodoo and a zombie, plus it gives geeks a new appreciation for George Romero and Robert Kirkman.

This was the only MST3K episode in which they shot two different versions. There was a version of this episode that premiered during the Turkey Day marathon, which serves as the only MST3K Thanksgiving episode.

Both versions are available on DVD, and the Turkey Day version is notable for introducing Dr. Forrester's mom Pearl (who replaced the departing TV's Frank), and for the gathering of many favorite characters from past MST3K episodes for Thanksgiving dinner in his Deep 13 lair (plus, for no apparent reason, Jack Perkins).

Perkins hitting on "Mr. B Natural" (probably the most famous short film that Joel and the Bots took on) is worth the price of admission, alone.

Enjoy these episodes, MSTies (and newbies to MST3K), and have a happy Turkey Day!