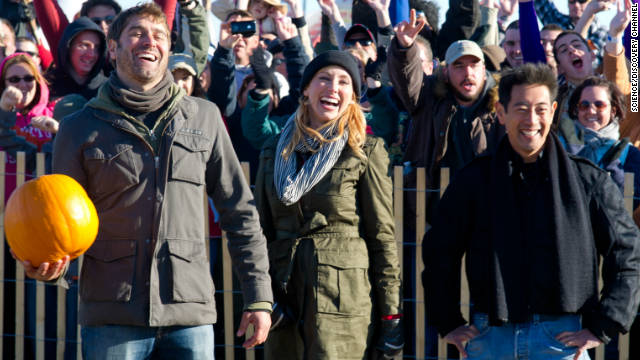 It’s Thanksgiving night and the turkey is reduced to a carcass. The family is near comatose on the sofa, and the clicker is poised to turn on a football game.

But Kari Byron, Grant Imahara and Tory Belleci from "Mythbusters" have other plans. They'll be hosting the 26th annual Punkin’ Chunkin’ competition in Delaware, airing tonight at 8 p.m. EST on the Science and Discovery channels.

Chunkers build machines, including trebuchets, air cannons and catapults, and use them to hurl the gourds as far as possible.

"Some of these air cannons are firing up to 4,000 feet," Belleci said.

Chunkin’ is quite popular in Delaware.

"Even the governor showed up," Belleci said.

"It is probably one of the most terrifying yet cool things," Belleci said. "I mean, we're around a lot of crazy stuff on ‘Mythbusters,’ but some of the machines that we're near is some of the craziest stuff I've ever seen.”

Some chunkers are engineers armed with calculations and computer simulations. Others are do-it-yourselfers who build contraptions in their backyards.

"I like to call it cowboy science, cause they're really hands-on and doing something somewhat dangerous," Byron said. "It's engineering with an adrenaline rush. It might be a guy from NASA, but it also might be a really amazing mechanic.

Note that chunkers won’t use just any pumpkin.

"They are specifically grown for this,” Belleci said. “They have very, very thick walls. They've been bred to be little projectiles.”