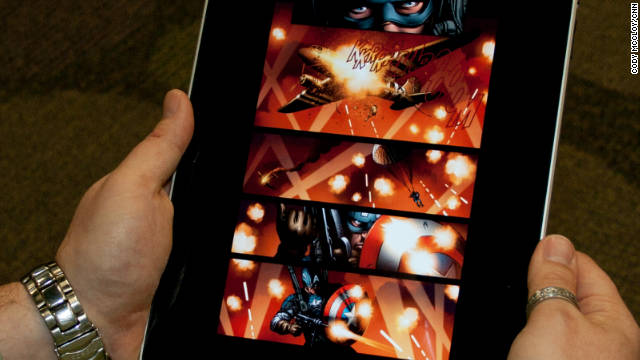 If you’ve never bought digital comics before, you’re probably wondering where to get them and what makes the vendors different from one another. To learn more about how other readers consume digital comics and what’s involved in their production and distribution I turned to three different digital comic vendors (Graphicly, ComiXology and iVerse) and one manga publisher who is distributing their digital content alone (VIZ Media).

Graphicly – An indie social maven
I first went to Graphicly, a company I’m already familiar with because they distribute my own comic in digital format. I work with them because while Graphicly sells digital comics from major publishers, they focus on supporting independent creators.

“Ultimately, the Graphicly platform is unique from our competitors in our dedication to supporting creators and publishers large and small,” said vice president of external relations Ron Richards. Graphicly highlights the communal aspect of being a comic book fan by making it easy to share digital comics via social media.

When considering the two types of digital comic book consumers, Richards draws comparisons to downloadable music and the 99 cents per song model. “We've seen sales of 99 cent comics do well,” he said, “I think $1.99 is also a good price point, especially for more premium content.  But ultimately, the price point will be what the consumers are willing to pay.”

Graphicly also adds extras to further enhance their content, like bonus content and audio commentaries. Recently, they acquired the “Double Feature” app, which provides the ability to incorporate work-in-progress layers onto each page, as well as scripts and commentaries. You can see what the original rough pencils look like or compare a writer’s script to how the artist rendered it on page.

Graphicly’s most unique functionality, however, is the ability to embed a digital comic into a web page and share it via social media. From within these embedded modules anyone can preview a comic and purchase it directly. This kind of community sharing is what all of the digital comics vendors I spoke to hope will help new readers discover comics.

“At the end of the day,” said Richards, “Comics are fun and entertaining and have created a vibrant community around those concepts and we just try to be the best participant in that community we can be.”

ComiXology – The popular kids
“Comics” by ComiXology is the only app that has both Marvel and DC titles on their platform. They have sales nearly every day of the week. For instance, when the second season of “The Walking Dead” debuted a few weeks ago, ComiXology reduced the cost of almost every "Walking Dead" issue to 99 cents.

Steinberger believes that increasing distribution is crucial to getting more people to read comics. The more readers digital comics have, the better the chances are that their prices will lower. This strategy would make the digital readers seeking lower prices very happy.

Steiberger’s plan might be working. The “Comics” app by ComiXology has been the #1 grossing iPad app for seven Wednesdays in a row. It seems lots of people are reading digital comics.

“That means comics in our app alone are selling more than every other type of app on the iPad,” said Steinberger, “When have comics ever been number one in the high tech arena, beating out first person shooter video games and popular apps from Apple itself?”

iVerse –  Experimenting at making new friends
iVerse CEO Michael Murphey says his company is very focused on finding new readers, and pursuing initiatives that will appeal to the next generation of readers. He cites their upcoming “Red Circle Heroes” initiative with Archie Comics as an example of this. The initiative is subscription based, costing about the same as a single monthly comic with a new story every week and access to hundreds of back issues. They also host 99 cent sales and have “Flash Mob Fridays” where a title will go on sale for a few hours at a discounted price.

Like Graphicly, iVerse’s “Comics Plus” app also allows for bonus content, such as video support that allows creators to add content they couldn’t include on paper, such as interviews or additional parts of the story.

VIZ Media – Manga’s digital do-it-yourselfer
Viz Media is different from these other three companies in that they’re actually a publisher that’s developed their own digital storefront, rather than utilize a third-party vendor. They’ve taken on the distribution role themselves and the investment cost that comes with it.

One major reason for this was that when they launched they felt the existing platforms weren’t optimized toward the manga reading experience, both in terms of manga page displays and the way the product would be merchandised. “Manga has a particularly different ‘grammar,’ if you will, from American comics that doesn’t make the viewing solutions for American digital comics directly transferable to manga,” said Alvin Lu, senior vice president and general manager for VIZ Media.

Controlling their own digital distribution also allows Viz to unify digital sales with marketing and merchandising. They experiment with various promotional sales, like their current 99 cent sale on “Neon Genesis Evangelion” chapters.

Lu thinks that digital manga has trailed behind American comics publishers but is going to have a big impact soon. Like those publishers, VIZ is measuring the response to different pricing and discounting strategies.

Augmenting comic book reality
All three of the vendors I spoke with allow their publishing partners to choose the price point for their products, though they occasionally provide advice based on sales trends. None of them charge a fee for their service, but they do take a percentage of each sale. So do the app stores, whether it’s through Apple, Google etc.

Murphey clarified that despite those percentages, it’s the vendors that have significant overhead to pay. “Every time someone re-downloads a purchase, that bandwidth cost goes to us – not Apple,” he said, “We have very significant overhead in constantly redeveloping the app for updated OS versions, ensuring backwards compatibility, and building out for new platforms.  It takes an entire team of people to adapt and submit these comic books - keep in mind every single issue has to be individually submitted to Apple on a daily basis.”

So does this cost/benefit analysis, plus ComiXology’s success mean that digital comics are overtaking print? None of these vendors seem to think so. All agree that print and digital distribution are working together to increase comic book sales overall.

“It [digital comics] sure can augment comic sales as another channel, a channel that's primed and ready for rapid growth,” said Richards, “Considering the available inventory is limitless (no printing costs, warehousing of inventory, shipping to stores/customers etc.), digital comics are absolutely a way for publishers to expand their business and help drive those overall profits across their business.”

“Combining both makes more money for the publisher and the creators. The wider the net, the better it is for everyone,” said Murphey.

But I will take advantage of digital sales and availability, as well as all the cool features these apps provide to enhance my reading experience. If digital comics continue to nurture the comics market without cutting into print sales than both are here to stay. I’m excited at the prospect that this new model could develop into a bigger comics community with more readers and even more stories.