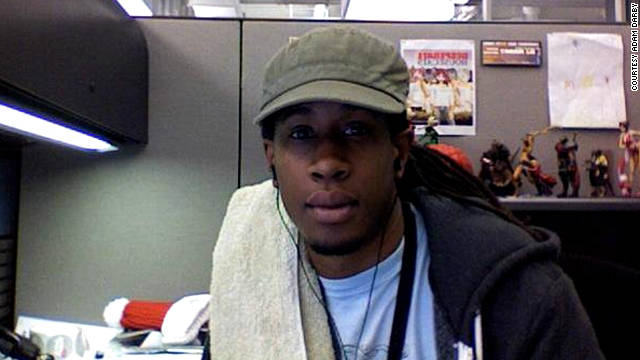 “There were very few black people there anyway,” he said. “But being the black guy who’s a geek made it weirder.

“I got a lot of ‘Hey, you’re not black, you’re white’ comments,” he said. “That actually really did bother me, and it still does.”

It was his ability to use computers and love of technology and anime that led classmates to tell him he was “white on the inside,” he said.

For Lewis, being a nerd became an identity crisis. He cites comedian Donald Glover: “It just recently became legal to be a black nerd.”

Now studying computational media at Georgia Tech in Atlanta, Georgia, Lewis doesn’t run into existential issues with being a black nerd – there are plenty of people just like him, especially in the College of Computing where Lewis spends most of his time.

Admittedly, the conversations are more about computing than being black, he said, but it’s a tight-knit group that understands one another.

“Georgia Tech has someone for you, no matter how nerdy you are,” Lewis said, with a laugh.

Janeka Rector, living in Austin, Texas, has similar tales of growing up as a black nerd.

With the exception of her parents, she said, “I don’t bring my geeky, nerdy craziness anywhere near the rest of my family, because they don’t understand it at all.”

Surrounded by athletic relatives as she grew up, Rector was more interested in watching science fiction television shows. But even though she enjoyed having a crush on Wil Wheaton, the actor who played “Star Trek: The Next Generation” character Wesley Crusher, she rarely identified with the female characters on the shows she liked to watch. (Whoopi Goldberg’s “Guinan” on the same show was as close as it got, Rector said.)

Being a black nerd could be a very isolating identity, especially for a military brat who moved around a lot, she said. So she made sure to surround herself with other quirky, nerdy friends.

“I always found a gang,” she said, whether they were from the speech and debate club, the theater club, show choir, or later in LARPing groups, the Pagan student alliance or the anime club at the University of Texas, Austin.

“I was always the only black girl in a room with lots of white people,” she said. “I just grew up that way and I never really thought much about it. But I know that my cousins had completely different lives.”

The mainstreaming of nerd interests within popular culture has made it easier to be a black nerd, said front-end web developer Adam Darby, but he, too, had a singular identity growing up.

“When I was young and growing up in the 80s, we were definitely anomalies,” Darby said. “I grew up in North Carolina and all of my friends were white. There was that and it was in my face and I had to deal with it my whole life.”

“My survival [strategy] was to stay low-key,” he said.

But a nerd is a nerd and there’s no getting around that, he said.

“Once you’re in the nerd category, you’re just there,” he said.

Lucky for nerds, Darby said, the nerd community is more accepting of differences than many other communities he has been exposed to.

“We have to be,” he said. “Our whole thing is we want acceptance on some level or another.”

“You can’t really say much if you have a tattoo of a Japanese cartoon character that no one within a mile of you probably has heard of. Our whole essence is based on things other people don’t understand or know about. So you wouldn’t turn around and then be judging of someone else. That’s hypocrisy.”

“We liked to think we were smarter,” Rector said of her nerdy circles of friends. “Race was for other people. We were intelligent, we were enlightened.”

Lewis agrees. The nerd communities he’s been a part of, “have been tolerant no matter who you are. No matter what race you are or sexual orientation you are or what religion you are.”

“Online it’s different, because they can’t see your face and can say whatever they want to say,” Lewis said.

Curt Jackson, an IT consultant and record label owner in Atlanta, Georgia, agrees that online, things are different, discouragingly so in the nerd community.

“Read any thread in Reddit about women, any thread about black people, Asians, Mexicans, gays, anything that’s not white male, there’s all sorts of things that are said on there that are either factually untrue, offensive, and they’ll use their intellect and their arguing capability to prove themselves right on the Internet,” Jackson said.

Jackson grew up in the shadow of steel mills in Braddock, Pennsylvania, during the 1970s and ’80s. He said his peers generally let him “do his own thing,” and didn’t accuse him of “acting white.”

Advised by his mother and grandmother to always be himself, he thought nothing of regularly carrying a briefcase to school in the seventh grade. A practical decision, he thought, especially if he wanted to sit down. No one treated him any differently when he tested as “gifted,” he said.

He sees himself as a nerd hidden in plain sight,  one that people would need to talk to in order to know he’s a nerd. “I’m proud I’m a nerd,” he said. “Totally nerdy.”

“That’s how it should be, anyway,” Jackson said, “You should have to talk to people to find out what they’re about.”

But as Lewis knows, sometimes those conversations can be disheartening.

“The worst part about being a black nerd is having to explain yourself and having to defend your race,” he said.

He often has to face comments like, “You’re the only black guy I like,” or “I’m not trying to be racist or anything, but I really like how different you are.”

“Just because I’m a nerd and I’m not as physically active as other black men doesn’t mean anything about them or my race at all. It’s just who I am,” Lewis said.

“Since you’re the only black girl for miles around, everybody kind of knows who you are,” Rector said of her similar social observation. “Which can be neat.”

But whenever she’s in the company of nerds and meets another black nerd, it makes her happy.

“Part of being a nerd of any stripe is that you are excited when you meet someone who understands even part of what you’re about,” Darby said. The enthusiastic conversations that often ensue are opportunities for nerds to test each other’s knowledge out, to see how deeply the nerd runs in their veins, he said.

“There are so many good parts about being a nerd,” Lewis said. “I just like being me.”