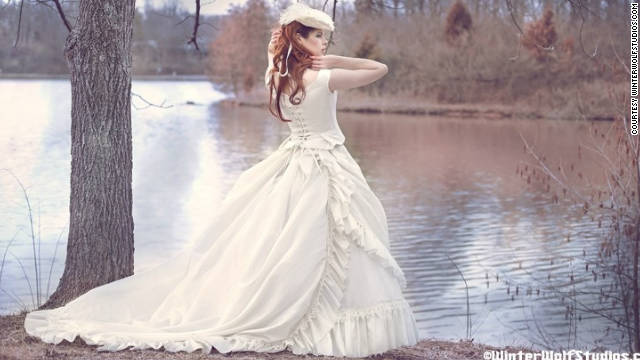 The classy clockwork couture of steampunk

When people see steampunks wearing one of Rex Norman’s sculpted top hat creations, complete with something that appears to be a coal-burning furnace inside, Norman likes to say that it makes “their face fall off” in utter bewilderment.

Check out our gallery of gorgeous steampunk fashion!

Other designs, like hats and masks that look as though they’ve been welded out of cast iron, tend to have a similar effect. And when Norman isn’t pursuing another stupefying hat design, he modifies thrift clothing into steampunk elegance, in addition to selling coats, epaulets, custom spats and goggles.

By day, Norman is a freelance artist for magazines and newspapers, and he considers his custom steampunk creations to be a fruitful, fun hobby.

From his online store, Kostoom Arts, Norman receives requests for budget-friendly, clockwork “mods” to thrift store finds and custom-made, mind-boggling hats from all over the world. He is just one of many in the online universe, providing a unique service to the steampunk community that he loves.

As the ultimate marriage of historical aesthetics and creative eclecticism, steampunk inspires artists to bend the limits of their imagination in order to create wearable, functional art.

They come from various backgrounds, but all of them have arrived at their passion for the subculture because of its alluring aesthetic and the seductive idea of selective or alternate history. And honestly, who wouldn’t want to dress up in a jaw-dropping Victorian-inspired costume?

If its healthy representation at conventions such as Comic Con and Dragon*Con the past few years are any indicator, steampunk can also be a lucrative business opportunity for these crafty individuals. A wide range of steampunk items, from elaborate full costumes to lace collars to corsets, are easy to find on sites like Etsy and eBay.

Travis Lilly has found success as a full-time corset designer and seller on Etsy with his Lilly’s Workshop store. Lilly taught himself to sew while he was in the Navy, and once his wife developed an interest in steampunk after spying it at Comic Con, he started making designs just for her.

Soon, other people began requesting his corsets, and Lilly decided to open a store part-time during his last two years of college to help pay for school. After graduation, his love of making corsets remained, and he has turned into a full-time designer.

Lilly makes the patterns for his vegan-friendly faux-leather corsets, which can take about a day each to craft. His most popular seller is the labor-intensive utility corset, so named for multiple pockets and pouches incorporated into its sleek design. He plans to expand his line of corset designs and enjoys making them more than any other apparel.

“It’s the more technical side of costume and fashion design,” he said. “The corset ties it all together because everything else is so easy to find, but to distinguish yourself as a Victorian, the corset is a staple item. It’s really easy to go to a Ren fair and pick up an appropriate overskirt and blouse that will get you by, but when you put on the corset, you’re instantly steampunk.”

Lilly’s designs fill a niche on Etsy and a demand for corsets in the steampunk community. Similarly, Charlotte Scott of Alice and Willow on Etsy began incorporating steampunk elements into her Victorian costume designs as the requests flooded her inbox.

She made steampunk part of her regular line and also created patterns for her two most popular sellers: the Freyja and Alessa corsets. Scott developed the patterns for herself, but they translated so well to customization that she soon began designing them for everyone. And while she sells these items in her store, each piece is a labor of love that fuels her desire to create.

“I've always been creative and come from a family full of creative people,” she said. “I know that even if I'm having a bad day personally, I can always make something beautiful from a pile of fabric that will hopefully go on to make another person feel amazing when they wear it. I think that's really my main reasoning for doing it.”

“I started to do historical costumes for myself, then for friends and now as a growing hobby selling online,” Hawthorne said. “I also love sleek modern designs, so combining the two seemed only natural.”

Hawthorne and Barry also have discovered that working with steampunk-oriented photographers and models greatly helps their business. Appealing backgrounds, full make-up and the inclusion of steampunk gadgets and hats help showcase the full aesthetic and allow online shoppers a chance to see the designs in motion.

Steampunk designer Anthony Canney has been creating steampunk designs for years, but he didn’t even hear the term until four years ago. With his parents both being Civil War re-enactors, Canney was making his own costumes at 14. But after learning about the aesthetic mash-up of Victoriana and futurism, his collections have become increasingly steampunk-centric.

While Canney designs for men and women, he features menswear prominently because it isn’t as common. For his women’s designs, he loves using exposed corsets and hoop skirts over fitted dresses in his latest collection. His Etsy store, House of Canney, even features corsets for men. These exposed corsets, both for men and women, help define the steampunk movement as inherently rebellious and sartorial, especially as they challenge past definitions of gender and formality.

Like Canney borrows from the best of historical Victorian fashion and juxtaposes it with “rule-breaking” sexuality, self-taught costumer Gretchen Jacobsen immediately fell in love with the flexibility of steampunk as it applies to fashion. As soon as she saw it, Jacobesen knew she had to take up the challenge, both for herself or for any custom commissions she might take.

“Unlike a historical re-enactment, steampunk doesn’t have set rules,” she said. “What I saw is that people who were very serious about steampunk worked at a very high level, they were great designers, very visual people, the aesthetics were strong and I wanted to be sure that when I made my leap into it, I could present at that level as well.”

Jacobsen’s fascination with steampunk has also caused her to create a persona to accompany the costumes she designs for herself. She identifies as the “part-time lion tamer,” based on an experience she had as a child when a circus wild cat trainer allowed her to hold a baby tiger in her arms. Because of this character who Jacobsen has developed for herself, her first design was a safari bustle dress. Her other costumes are closely related to this identity as well.

“I love the open-endedness of steampunk,” she said. “Even though there are set ideas or concepts you need to sketch within, you can bend those. I love to dress up, but you have the flexibility where I can be a part-time lion tamer or I can be me, and that they’re not so far apart when you’re in steampunk. There is a certain glamour to it.”