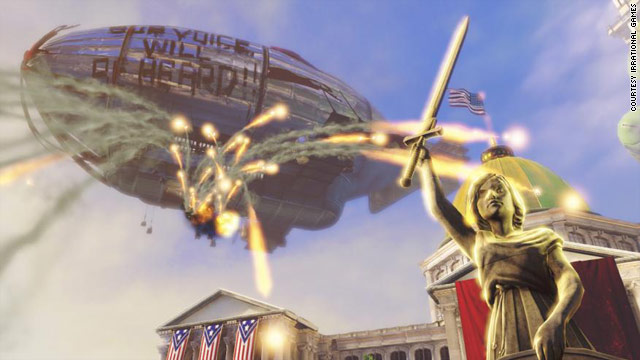 In this case, the opposite of an underwater city is a floating one. (Think Cloud City from ‘Star Wars,’ only with its residents clad in period-appropriate petticoats and spats.)

So, Levine and the rest of his game designers turned back the clock a few decades to the late-19th century, and the fin-de-siecle sense of American Exceptionalism unleashed at the 1893 World’s Fair, named the Columbian Exposition for the 400th anniversary of Christopher Columbus’ arrival in the Americas.

The Exposition was, for the denizens of Chicago, a visit from the future, Levine explains: “Nikola Tesla and George Westinghouse offered one of the first public exhibitions of the power of alternating current electricity. You have tremendously advanced industrial steam engines on display. There was even a moving sidewalk.

“It was literally something out of Steampunk, or other kids of speculative fiction. It was like this super-technological enclave had set up camp in Chicago.”

And so, the idea for the setting of ‘Bioshock: Infinite’ was born: Columbia, a floating city suspended in the sky by dirigibles and hot air balloons. The game luxuriates in the Steampunk aesthetic, from the airships plying the skies around Columbia, to its nods to Art Nouveau architecture, to the physically impossible (but visually impressive) ‘skyhook’ system that serves as the city’s mass transit.

Indeed, the game’s plot reads like something ripped right from the pages of a Steampunk fiction novel: In an the alternate-history America of 1912, the tremendous technological advances embodied by Columbia have sparked a bitter class war in which your character finds himself.

The haves (The theocratic and authoritarian Founders) and the have-nots (the violent and anarchistic Vox Populi) are engaged in all out street wars on the floating city blocks that make up Columbia. And you, former Pinkerton agent Booker DeWitt, must levy an arsenal of retro-futuristic weapons like rocket launchers and ray guns to rescue a young, gifted psychic named Elizabeth. All while clad in a dapper suit, naturally.

Pulpy stuff, undoubtedly. But off-the-wall plot elements notwithstanding, this Steampunk-inspired setting is very much in line with the zeitgeist of this period in American history.

“When you go back to that time period and start examining the fiction being written, the art, the early science-fiction – there were all these images of cities floating in the sky,” Levine said. “That’s where we got this idea from, and really ran with it.”

“Scientific advancement had already taken people on such a ride during that period, it seemed like those kinds of innovations wouldn’t stop, it’d just keep going,” Levine said. “Really, something like Steampunk isn’t too far out of the realm of imagination for the people of the early 20th century, I think. This was probably the most transformative period of technology that ever was, and maybe that ever will be.”