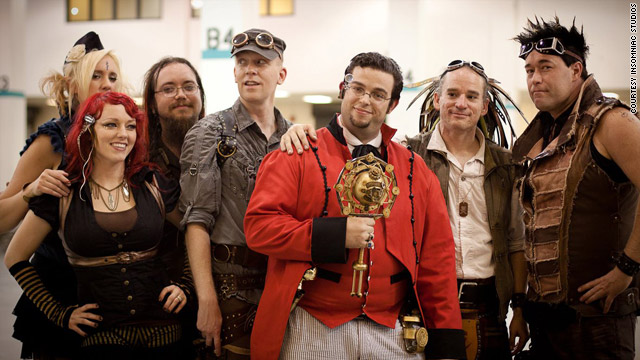 A DJ by trade, Dr. Q has been a heavy presence at Steampunk conventions for the last two years. The Mechanical Masquerade was a casual and lighthearted affair with an inclusive vibe, but Q is anything but casual.

Clad in an overcoat, vest and cravat, he looked as though he’d just stepped off the streets of late-19th-century London. Others milling about at the party sported similar get-ups: Ladies cinched into elaborate corsets, gentleman in high-collared shirts and top hats. And ever-present were various brasswork and metallic accessories: Canes, goggles, weaponry, even a tricked-out Ghostbusters Proton Pack festooned with colored LEDs.

This futurist-Victorian chic has become the genre's calling card, but there are other varieties that fall under the Steampunk umbrella, like Weird West (think “Wild Wild West” or “Firefly”), or twists on Britain's Indian and African Colonial eras.

Still, these categories are, at best, mere generalities and guidelines – inspirations, even. Unlike sci-fi or fantasy, there are very few established works or series that can be said to form anything resembling a canon. Anyone can dream up their own character, or their own universe.

“I think that’s why as a movement, and a theme at the larger conventions, Steampunk is really growing,” Q said. “You have people who love dressing up in costume, and they don’t need a pre-defined character or universe. It can be theirs: Their persona, their character, their creation come to life and paraded around for all to see and take pictures and enjoy."

Much like the genre’s anachronistic combination of vintage fashion and quasi-futuristic technology, the beating heart of the community is this interplay between an individual’s interpretation of their Steampunk persona, and group-oriented gatherings and collaborations.

But more than that, Steampunk isn’t simply the act of appropriating historic fashions. Another unifying theme of the genre is the hunger to take the traditional meanings of those vintage styles and subvert them.

“These signifiers of class and gender, and even race, which we see expressed in Steampunk costumes – they used to control so much about our lives and our destinies. But now, they just don’t mean what they used to mean,” explains Emilie Bush, head author and PR director for the Artifice Club.

“When we look backward and see the ways that people were cast into tight roles by society, you see that they were born into these roles just based on who their parents were, and whether or not they had money, or where white or black. And so, with Steampunk and our 21st century gaze, we start to invert those things.

“We understand the etiquette and costuming, but we’re turning it on its ear.”

Bush also believes that a large part of Steampunk’s ever-increasing appeal lies in the community’s sheer force of imagination, and the obvious love and care that goes into their DIY creations. She relates the genre to the decline of U.S. industry, and the hunger for craft, to produce something tangible.

“We’ve all been in bad economic conditions since 2005, or maybe even earlier. So much of what we thought we knew is just disappearing out from under us,” she said. “People are looking for something that’s real. And it’s funny that they’ve found reality in this fantasy that we’ve created, but it’s created a real community. People are being brought together by this.”

It’s the same reason Dr. Q says he fell in love with Steampunk in the first place: “It’s us, it’s all of us – making and putting on these costumes, and really living a life that we always wished could have happened, but didn’t. And then looking back, and being able to say that this is something all our own.”