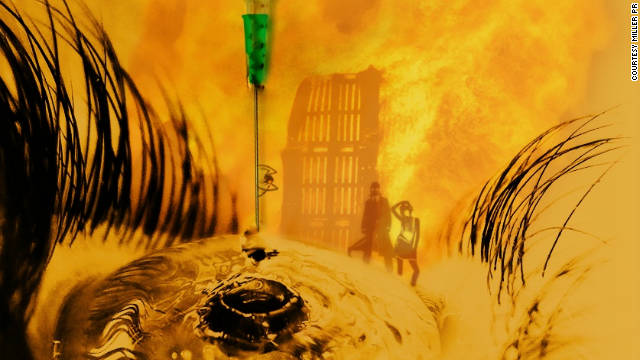 When Brandon Trudel first saw mentions of “Nexus Humanus,” an organization that promises to “create sustainable happiness, one life at a time” on Twitter, he had no idea he was about to be pulled deep down inside an alternate reality and the world of BZRK.

Trudel knew it was an Alternate Reality Game (ARG), but he had never seen one styled quite like this. It was only his second ARG experience, but what kept him coming back to this one was “the weirdness.”

A steady stream of YouTube videos, curious clues and puzzles began to feed in from the four different websites: Death or Madness, the Society Twins, Nexus Humanus and GoBZRK.

Trudel spent at least ten hours a day, alongside an online community of friends, helping out the characters that had been brought to life through these sites. They were tasked with solving the riddles presented by BZRK, a nano-guerilla group opposing a power-mad duo intent on using nanotechnology to control humanity.

If this were a novel, Trudel says he wouldn’t be interested.

The 20-year-old computer science major lives on Twitter, Facebook and YouTube, not through books. But this universe that author Michael Grant , publisher Egmont and entertainment studio The Shadow Gang have teamed up to create has Trudel excited for “BZRK,” the book that began it all.

Grant, co-author of the popular ‘Animorphs’ series with his wife, K.A. Applegate, is releasing “BZRK” at the end of February. But the transmedia experience across multiple platforms, including social media, videos, character blogs and forums on Nexus Humanus, has engaged an entire online community months in advance. They feel like they know the characters, and they can’t wait to find out what happens next after helping them navigate the twists and turns of the ARG.

“It seems like it’s going to be a nice little rollercoaster ride when the book comes out, which is interesting because I’m not a reader,” Trudel said. “I hate reading, but I’m looking forward to this book. I’m already stuck in the story.”

Grant has used the intersection of social media’s presence in our society and a “new approach to scary and intense” to create the world of “BZRK.”

“I was sick of vampires, sparkly or otherwise, sick of the usual monsters and I was even sick of aliens,” he said. “So I decided rather than look through a telescope I'd look through a microscope. There is a whole utterly strange, disturbing, bizarre world 'down in the meat,' as we'd say in BZRK.

“The really cool thing was that I was able to tell a sort of bi-level story, with intense sanity-threatening action at the nano level that happens at the same time as intense action up in the macro. A person can have his biots in another person's brain, fighting a terrible battle for control, while at the same time they may be getting chased through the streets of New York or London.

“The core conflict is between people who want to use nanotech to impose a sort of global Facebookization of the human race and eliminate hunger, hatred and war - along with much of free will, versus BZRK, which is people choosing individualism and liberty even at the cost of the horrors that sometimes result.”

With such an innovative storyline, Grant knew he had enough material to create a transmedia life beyond the page. So Grant turned to his friend, Alex LeMay of The Shadow Gang, and they began talking about the future of the novel.

Together, they looked at where teens spend most of their time and why they keep going back. LeMay had the realization that with the prevalence of 4-inch iPhone screens, tablets and even laptops or desktop computers, they weren’t “fighting for the living room anymore.” They could take Grant’s story to the Internet and spread it across multiple platforms, all with entry points to engage tweens and teens, rather than one specific and exclusive gateway.

“We started playing with what could be possible with reality and fiction and blurring the two together,” LeMay said. “We wanted to unlock these stories and have more of a dialogue with the audience and allow them to wander in this universe rather than just a series of books pushed at them, where they really didn’t have a say in anything.”

Instead, creating an ARG invited people from all across the world to communicate with and shape the fate of pre-existing characters. These characters were lovingly given an online existence by The Shadow Gang’s Rich Silverman. TSG was able to take cues from their users and they had to monitor every twist and turn of the ARG to respond to what the users were asking.

A minor character of a copywriter was created to keep the GoBZRK site going, and he quickly became one of the most popular fixtures of the ARG. TSG wasn’t expecting the reaction, and they had to react quickly by amping up his involvement and blog posts.

When The Shadow Gang killed off one of the characters early in the ARG, the response was vehement. One user went so far as to send them a video, crying and asking why he had to die.

“No movie marketer gets to see that dialogue, in the comments section,” LeMay said. “In the 21st century, a book isn’t the four corners of the thing you buy at Barnes & Noble, a book looks like the narrative universe that lives everywhere, all day every day, and is constantly in a state of flux.”

The response of the users isn’t unlike when Grant and his wife used to receive fan fiction and art for "Animorphs" – online, in the early 90s. The couple was among the first writers to witness an online community related to their books.

Because of Grant’s unique experiences with online fan communities, The Shadow Gang wanted to create a transmedia experience that likens itself to an amusement park: two people may enter through the same gate, but if one veers left and they other turns right, they will meet at the end of the park having lived through two entirely different experiences.

As users have wended through the twists and turns of BZRKs platforms, more release dates for the continuation of the transmedia experience continue. In December, the new GoBZRK site launches in advance of the book’s impending release.

Grant and LeMay both feel that the responses have been extremely positive to their ARG. It has created an educated hype, and a bond with characters.

“All along, you’ve been treated to an introduction to the universe, so that now when you open page one, you feel like you’ve been living this,” LeMay said. “This is much bigger than just this book, this is going to take you somewhere else beyond it. So the question is, what’s next?”