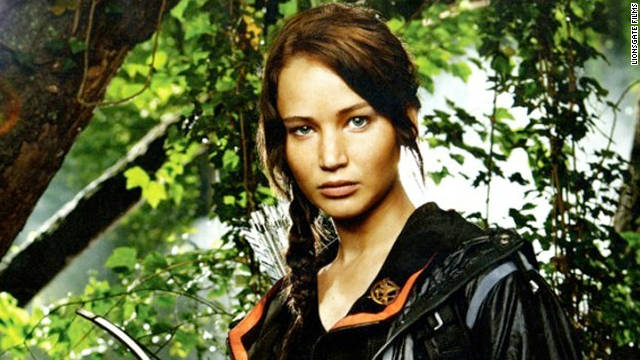 We've already speculated if the Suzanne Collins young adult trilogy "The Hunger Games" will be the next big thing to come out of Hollywood. And from the look at the fan reaction to the world premiere of the first full-length trailer this morning on Good Morning America, it seems as if it's brewing up just the right amount of excitement about seeing these characters come to life.

The first film, which depicts young heroine Katniss Everdeen and a host of other young faces being thrown headlong into "The Hunger Games" - a brutal competition for survival in which only the strongest, swiftest and most clever participant will be left standing - has echoes of Japanese classic novel-turned-film "Battle Royale" and Orson Scott Card's Hugo award winning "Ender's Game."

So what's the difference between this young adult phenomenon and one like "Twilight", and why is "The Hunger Games" more of a secret gem for a geek?

The key may be in that the two universes are spearheaded by very different heroines. "Twilight" climbed to glory with a teenage protagonist that acted as more of a vessel than a defined character. Teenage girls could easily dream themselves into the role of Bella.

And while she might not have had a ton of eccentric or memorable qualities, it was easy enough to envy her life. Every good looking non-human she could find in the small town of Forks was pretty much willing to die for her in the blink of an eye and readers were more than happy to sit around and bask in the glory of the shirtless heartthrobs racing to win Bella's heart.

Katniss Everdeen, the 16 year old protagonist of "The Hunger Games", is a girl who's seen her fair share of challenge before she ever steps foot in the book's fabled arena.

Growing up caring for her little sister and hunting to keep the family away from the brink of starvation, she's the kind of spunky type that geek chicks and other Generation Y types will feel some sort of bond to because she's simply voracious when it comes to fighting for her independence.

No matter how hard it gets, Katniss continues to press forward - and that's the kind of determination that appeals to us.

While "Twilight" captures the fan who likes her men pretty, muscled and not quite human, "The Hunger Games" presents a lady less reliant on gentleman callers (although they show up anyway) and more on fighting the good fight.

There's nothing inherently better about one or the other, but a young geek with a fierce sense of identity is more likely to look up to the feisty Katniss Everdeen than a mopey Bella sitting in front of her living room window for months after Edward hit the road.

The full trailer can be seen here. "The Hunger Games" premieres on March 23rd, 2011.