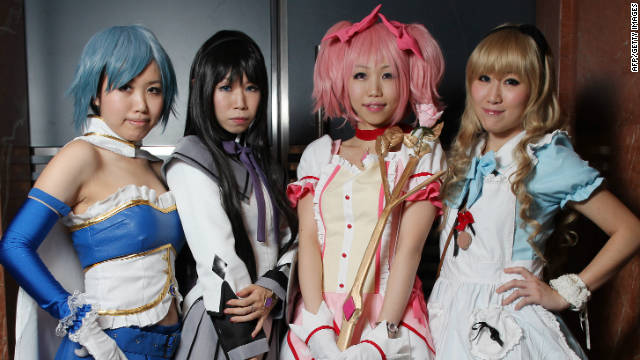 Otaku life: So you want to go to a con

Becoming an Asian culture nerd is a sneaky process.

Sometimes it creeps up on you in such a way that you have no idea that it's actually happening. You listen to some AKB48 singles that a friend gave you, and soon they're in rotation on your favorite playlist. You saw one Japanese horror movie, and now suddenly you have to see them all. You picked up an anime habit you can't seem to shake.

Or, most befuddling of all, you've piled on all these habits and you seem to keep finding new ones, like researching characters from shows you like and realizing you're wondering what it would be like to dress up as them.

Maybe you're handy at sewing, and you decide to make the costume yourself, or maybe you're a total klutz and you buy the costume on the internet. Next thing you know, you've tried it all on at home in the mirror, and you feel magical and awesome, and you realize that you have one major problem: You need a place to go to show this off and to enjoy the feeling of being that character you admire for a day, or two, or maybe even a whole weekend. And all at once, it hits you that your hobbies are about to go to a whole new level.

It's time to attend your first convention.

To a person who has never attended one before, a convention (or "cons", as they are called for short) may seem intimidating, like some sort of secret club that one has to gain admission to. And in a way, that impression is somewhat valid - one does need to buy an actual ticket to walk inside of a proper convention. However, the ticket really is all you need.

I say that because whether you attend your first convention with a gaggle of friends and plan a group cosplay, or whether you show up alone, you're bound to make more friends along the way. That's one of the magical things about going to a con: You're about to enter a sacred space that is dominated by a large group of people who share a tremendous amount of your interests, and are just as starved to talk about them as you are. In other words, you've found your tribe.

Hard not to be excited about that.

Where to begin, though? Well, by now, friends, forums and Twitter have probably let slip some of the heavy-hitters: Anime Expo. Otakon. Fanime. Anime North. These bigger cons get mentioned more often, of course. But perhaps it's not in your budget to go running to the other side of the country, rent a hotel room, buy a ticket AND pay for the cost of your costume.

If that's the case, smaller, local cons are a great way to start, and there are tons of them. While they may not have all the star power of the biggest cons, they still offer a lot for the budding anime fan to enjoy. And if you love it, you can always save up to make the big trek across the country for one of the big ones. Good luck packing that Buster Sword for travel, by the way.

When you arrive at the con, you may realize you've been propelled here by some simple motive such as seeing a guest or maybe even just dressing up. However, there's a ton of cool stuff to do at a con, and it can be overwhelming to know where to begin.

For instance, there are meet-ups designed for cosplayers who like certain characters. So, if you came dressed like Hatsune Miku, you can go meet everyone else that's in their Miku costumes. You can meet voice actors who voice your favorite characters in anime. You can go to see musical performances. You can go to the Dealer's Room, which typically has a huge selection of anime-related merchandise to purchase.

Speaking of niches, there are cons that cater to each specific area of otaku interest. Maybe the deeper you get into anime, you realize that you really like certain kinds, or some subgenres really speak to you.

For instance, Yaoi-Con is a growing convention that takes place every year in Burlingame, CA that caters to fans of a subgenre of anime called "yaoi" - also known as "boy love," or anime that depicts attractive young men falling in love with one another,  which was created in Japan specifically for a female audience. Some would turn up their noses at the prospect, but for others, it's like stumbling into their own private heaven, complete with a large group of people who can understand exactly why that is.

That's what's at the core of every con - a sort of alchemy among its attendees. The heart of the transmutation is the creation of a temporary universe, where people who do not normally feel accepted in the world can go and feel right at home.

Perhaps you will pass someone in the hallway, recognize their costume and yell, "Yeah! Asuka!" and know you will be rewarded with a smile for knowing who they are. Maybe even stop to talk or make a new friend. As long as cons continue to offer these opportunities, people will continue to be drawn to them, whether they cater to otaku interests, comics, sci-fi or anything else in the geek spectrum.

So go. Find your tribe. They're waiting.