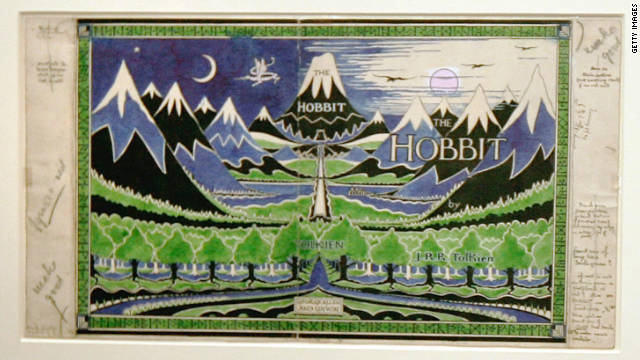 Nearly seventy-five years later, Tolkien’s inventive world has continued to endure. And it seems it has also endured beyond his written work– both penning Middle-earth into existence and expanding on his fantasy masterpiece through visual language.

When The Hobbit debuted in 1937, it featured about twenty original drawings, including the popular emerald dust cover imprinted with the misty mountains that Bilbo and his friends pass over in their adventure. Throughout the years, additional Tolkien illustrations have been published in various editions.

Now, to mark next year’s 75th anniversary, HarperCollins has published the Art of the Hobbit, a collection holding never-before-seen drawings and paintings the author used to illustrate his seminal novel.

“I’m delighted that people can be reminded that Professor Tolkien was more than a craftsman with words. He was also an accomplished watercolor artist and illustrator,” Broadway said. “I love that this publication commemorates Tolkien’s artistic design for The Hobbit.”

While preparations were being made for the upcoming anniversary, the illustrations were unearthed in the archive of the Bodleian Library in Oxford. And acclaimed scholars Wayne Hammond and Christina Scull have turned the happy accident into a fantastically rendered book that Tolkienites are sure to devour.

“This is going to be very well received and fans are going to respond strongly,” Larry Curtis, a writer for TORn said. “I think it’s a great publication and an academic side will be thrilled to see these illustrations. And I think those who barely know the world will also be very drawn to the book.”

A lot of fans have already seen many of Tolkien’s art; however, this is the first time a book has been produced to collectively showcase the prolific author’s own vision of his world. The artwork ranges from an assortment of ink drawings, maps, sketches and watercolors sumptuous with color.

“We hope that those who know only the text of The Hobbit will be excited to discover that it was originally an illustrated book, and that those who have read The Hobbit with its usual set of pictures will be glad to find that Tolkien made many more,” Hammond said.

As for how the book is laid out, the editing duo tells CNN that they arranged the artwork in the order of the events in The Hobbit, and to the best order that Tolkien made them. The book also includes four foldouts, each of which show four to five illustrations in a sequence side by side and in a large size.

Additionally, they’ve also been able to include many more Hobbit renderings than they had room for in their earlier book, J.R.R. Tolkien: Artist and Illustrator, many of which have not been previously published and all of them in color.

“We have separate sections for several maps that Tolkien drew, and for his binding and dust-jacket design,” Scull said. “We had the most fun, though, in putting together one of the page details from the illustrations showing Bilbo at home and having his adventures.”

With the word “hobbit” firmly embedded in today’s lexicon, the popularity of Tolkien’s works has grown significantly over the years and has inspired a legion of fans. Curtis adds that these newly published illustrations will measurably add an extra dimension to the late author.

“The writing can stand on its own. But it’s really exciting, even for a non-die hard fan to have something new from him. Its pretty great,” Curtis said. “I don’t know how excited people can get about books or works about dead authors, but it adds a lot.”

It’s well acknowledged that Tolkien’s literary work is extensive, especially with the influx of posthumous work, starting with The Silmarillion that was apportioned by Tolkien's son and literary executor, Christopher Tolkien.

“We would all be much the poorer if we couldn't read posthumously published works by Tolkien such as The Silmarillion, Roverandom, Mr. Bliss, and of course the invaluable manuscripts collected by his son,” said Hammond. “All of these reveal new aspects of his genius, and it's important to see his paintings and drawings because Tolkien's powers of invention as an artist equaled his skill with words.”

Tolkien’s art for The Hobbit certainly expands upon his story and the Art of the Hobbit aims to show readers how the tale was written. The editors add that his final illustrations of Hobbiton, for instance, includes details not put into text until The Lord of the Rings. And so when it comes to posthumous work, Broadway thinks Tolkien fans will always eat it up.

“On the publishing side of things, there’s always an immediate approval from the community. If someone comes out with an adaptation, that’s when things get a little dicey,” he said. “However, the majority has always been excited for new Tolkien. I think a lot of us think, “Aren’t we lucky to be alive that we can get our hands on it?””

“It continuously gives people a little more to discuss and reinvigorates that fandom,” he said. “Anything authored or illustrated by Tolkien has always been handled appropriately and there’s great scholarship that goes into handling his posthumous work. It has led to some great things.”

Nobody however knows the world better than Tolkien himself. And now with the release of the Art of the Hobbit, coupled with the 75th anniversary and Peter Jackson’s long-awaited film adaptation set for next year, it will all spark a renewed interest in the book that started it all for Tolkien.

“The Hobbit is an evergreen book and The Art of The Hobbit will without a doubt create a lot of new curiosity,” says Curtis. “I think the combination of that and the films will absolutely create a resurged interest in the books.”

Tolkien’s work and creativity has left an unrivaled mark on our culture— his world and his characters aren’t only confined to the page, but have thrived in various mediums of art, music, film and fandom. And although the films have certainly brought the magic within the pages to life, Tolkien will forever remain the true artist who has captured the imagination and hearts of millions.

It all began in a hole in the ground where there lived a hobbit and just as wanderlust was awakened in Bilbo Baggins, it’s the hope that old and new fans alike can also have a wanderlust awakened in themselves for Tolkien’s world.

“We can all identify with little Bilbo, who discovers a world outside his comfortable home and hidden abilities within himself,” Scull said. “We hope that Tolkien's visions for The Hobbit will impress themselves upon readers, as a contrast to however the filmmakers interpret their work. And that our book will lead more to read The Hobbit and to form their own personal visions of its characters and world.”