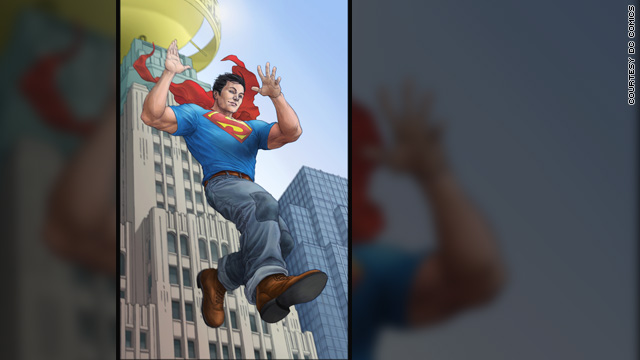 The man who reinvented Superman

Grant Morrison is a Scottish-born comic book writer that has written for titles including "Animal Man," "Doom Patrol," "JLA," "The Invisibles," "New X-Men," "Fantastic Four," "Batman and Robin" and, most famously, the classic Batman story "Arkham Asylum," and the Eisner award-winning "All Star Superman."

His unique take on superheroes, as explored in his book "Supergods," has made him one of the most talked about writers in comics today (in 2006 and 2010, he was voted second only to "Watchmen" and "V for Vendetta" writer Alan Moore by the readers of Comic Book Resources).

Hey, they even made a movie about him.

And I got to speak to him about his contribution to the "Action Comics" line for DC Comics (DC like CNN are both part of the Time Warner family).

After I got used to his fascinating Scottish accent and started to understand what he was actually saying, things got really geeky. We discussed his thoughts on the differences between Batman and Superman and which is the best comic in DC's "New 52" (not to mention his most unusual, favorite location for reading comics).

CNN Geek Out: Did DC come to you write "Action Comics" or did you pitch them the idea?

Grant Morrison: No, actually Dan DiDio (Co-Publisher of DC Comics) came over earlier in the year and told me what the plans were for this whole "New 52" initiative and he wanted me to do Superman.

I had no intention of it really, because I was kind of wrapping up all of the "Batman" stuff and I kind of said what I wanted to say about Superman (Grant wrote for All-Star Superman from 2005 to 2008) and the old Superman book, but I kind of had a little bit left over.

After I‘d done that story, it was kind of the end of Superman’s life, and I was interested in going back to the roots of the character, and his social and political roots, and maybe doing a take that dealt with him as a young man, but I didn’t really have any plans for that until Dan came over and then when he gave me the opportunity, and he said that they were willing to even change the continuity, and to let some new ideas and energy into it, it seemed perfect for that.

So the two things came together.

But again as you say, it’s very different from Batman, as that character was based on mysteries and intricate puzzles, and all that sort of stuff. Whereas "Action Comics'" title demanded that you take it in a much more physical and visceral way, so it was two different ways of thinking which also made it a little bit more fun.

CNN Geek Out: What are the key differences in the way you write Superman or Batman?

Morrison: Batman is a lot darker, but not only is it darker, it’s a lot more psychologically intricate.

Batman’s world is filled with kind of complex even neuroses given form, and Batman’s constantly dealing with characters who use riddles and puzzles so he kind of lives in this Davinci code world, and for me that is what inspires the type of stories I tell.

Superman is very much a physical character.

The confrontations are very direct - he fights giant robots and monsters and things, so the kind of symbolism the two of them work on are very different. And of course, Batman is this rich guy who deals with the underworld, and Superman is the son of farmers who tries to fight for the common man so they have very different almost class structures as well.

CNN Geek Out: So, who do you like to write for most?

Morrison: I think that both are interesting.

They are kind of like ancient gods. What they represent is very specific and part of human nature.

They are kind of about different things and you can tap into them for different moods.

CNN Geek Out: If you had your choices, would you rather write for an established title like "Action" or one that you have created with no back history?

When I am creating my own comics and it’s my own characters, it comes from a different place as a writer. But I do love to tackle these big characters that have been around for so long.

As I’ve often said, Superman is more real than me in the sense that his existence goes back to 1938 and will continue long after I’ve waved farewell to the planet. So there is something really exciting about taking something, well it’s not really a myth, but it’s certainly approaching an almost folktale status. And to be able to work with characters like that, I find it quite fascinating.

You know it’s like adding to a medieval cathedral almost.

CNN Geek Out: Are you happy with the feedback that you’ve gotten from the first two issues of "Action Comics?"

I’ve been avoiding most of the online feedback because it is best not to listen. I’ve been down that route before. The fact that the book’s done well is great. I’m most excited about the fact that the younger, more proactive kind of devil may care Superman has kind of struck a chord.

I think a lot of people had kind of relegated the character you know, and he’d become almost a symbol of middle age, patriotic America that doesn’t necessarily exist anymore in that sense. So, I think my biggest achievement is to see that people have actually enjoyed a fresher, as I say, more proactive take on Superman.

CNN Geek Out: Do you think you have a different perspective on Superman having not grown up in the states?

Morrison: Well, and I’m sure it’s inevitable. I mean obviously people have asked me that before, and yeah, I think there’s a certain sense in that coming from outside America gives me a different perspective.

And in that sense again, we tend to see Superman as a fuddy-duddy out of date character, or as something that is quite a powerful symbol who can be given all kind of new meanings.

So, yeah, I mean maybe there is kind of a familiarity with the character in America that’s maybe made people overlook the potential of it that possibly people in other countries like Scotland or England have noticed in the character.

CNN Geek Out: If you could have free reign to take any character in the DC universe and change them, who would it be?

I’ve kind of run through most of them. The ones I’d still like to do maybe are the Flash and Wonder Woman. It’s not so much what I would change, but how I would approach those stories. I think the very basic idea of a man who gets faster and faster is almost a great science fiction story in the vein of incredible shrinking man or Stephen King’s Fena.

And I think that the way of doing the Flash story as more of like a Groundhog Day or something, I think it would be much more universal. So something like that I’d like to do.

And Wonder Woman is just a big challenge because it is hard to get that character right and to make it both commercial and sexy without being exploitative.

CNN Geek Out: You finished “season one” of "Batman and Robin." In 2012, you are going to go back to that book and wrap up the story arc. Do you see that book living on after you're done with it?

Morrison: Well, I hope the comic book continues to live on certainly.

I’ve done five years on Batman and done this big, overarching story, so I think I could do one more year and then that’s the end of the line with Batman. I’ve kind of exhausted myself on that character for a little while. But hopefully it will be a big complete story that is six years long, so there’s quite a lot of issues in there.

CNN Geek Out: Have you read the new "Animal Man?"

Morrison: I have, I’ve really enjoyed it.

CNN Geek Out: What did you think?

Morrison: You know, I always think it’s sort of odd that Animal Man’s sort of become the horror comic all the time. Even though he started out as sort of a sexy superhero, he always kind of gravitates toward horror. But no, I’ve really been enjoying it. I think there’ s a lot of really good new writers in there. Particularly through the new issues.

CNN Geek Out: If you could only recommend one comic, in the DC Universe, that you think folks should be reading, what would it be?

Morrison: From DC, there’s quite a few. I read them in the bath. It's a hard choice, but perhaps Paul Cornell's "Demon Knights."