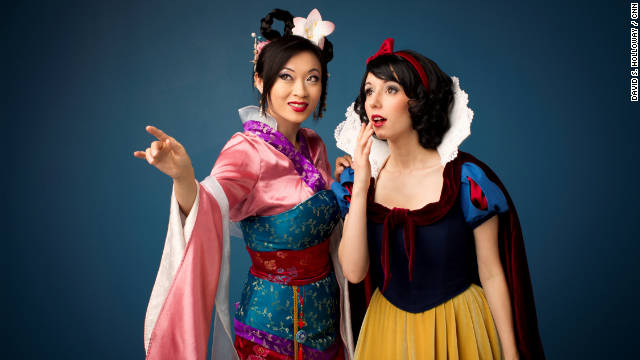 Eye-popping, physics-defying costumes thrill and amaze fans of Japanese video games, anime and manga by bringing their favorite characters to life, and is itself the ultimate expression of fandom, according to Yaya Han, an Atlanta-based cosplayer who has had a high profile in the cosplay comunity for the last 12 years.

"To me it's an unlimited creative outlet," Han said. "Before I was a cosplayer, I was a fan artist. I would draw my favorite characters and sell the pieces at art auctions."

The cosplay community, by and large, create their own costumes, she said. Developing sewing, painting, sculpting, jewelry-making and wig-styling skills is part of this fan-base homage to Japanese entertainment.

And yet, when seen outside the context of fandom, cosplay is not always seen as the result of skilled craftsmanship. Han said that many reporters have asked her questions that confuse her practice with LARPing. Recently, cosplay has been portrayed in the media as being more about cleavage and snagging dates with wide-eyed fanboys.

While Han admitted many entertainment companies are hiring "booth babes" - models who are dressed like cosplayers to draw attention at fan conventions - she stressed that true cosplayers see that as a dilution of the art. In stark contrast, today's fan convention organizers respect cosplay to the point that they often set aside money specifically to fly masterful cosplayers to the convention as special guests and panelists.

"At New York Comic Con, I was interviewed by the New York Post," Han said. "I was wearing Amber from 'Sucker Punch.' It was a costume that I made and spent a lot of time and money on, but the guy just saw me in an outfit where my cleavage was showing and I was wearing bloomers and chaps and my butt was showing."

A New York Post photographer asked to take Han's photo for an upcoming article, and a writer interviewed her on the spot.

“I talked about making costumes, the passion behind it, the calendar, why we’re doing this. That it’s an art form that can really put people on the right paths in their lives - it can put somebody who had no direction before on a path to wanting to pursue a career in fashion or costume design just through cosplay," Han said.

But she was disappointed when the article came out, because, "he was concentrating on quotes about girls getting hit on and girls wearing skimpy outfits. and then there was a big picture of me accompanying the article," Han said.

Riki pointed to a recent article on the Men's Fitness website about New York Comic Con that was as much of a surprise to the cosplay community.

"It starts out by saying New York Comic Con is a place where you can go and not be bullied. Then the article proceeds to post images of people in costume who maybe are not in the best shape and proceeds to make fun of all of them," Riki said.

"What’s a real shame is, I was at New York and there were a lot of amazingly fit people and they didn’t bother to take a picture of them. They just go for the geeks," Riki said. "You see them making fun of geeks because they feel like we’re easy fodder cause we’re not going to fight back."

The Men's Fitness article was taken down after negative reaction. Jordan Burchette, author or the article and digital site director for American Media, which runs the Men's Fitness website, said the article was published October 15 and was taken down October 24 because of the persistent complaints from a "small group determined to make themselves heard," Burchette said.

When CNN asked Burchette to elaborate, he said he always thought costuming and cosplay was cool, but that this was designed to be "a humor piece" and that he didn't feel he was bullying anyone. He addressed the incident on his own website.

The popular portrayal of cosplayers inspired Han and Riki to dress as Disney Princesses at a recent photo shoot at Turner Studios in Atlanta, Georgia. They wanted to show that cosplay includes all kinds of costumes.

That and the fact that Disney princesses happen to be an immensity popular topic for cosplayers, even though they are not of Japanese descent. Han dressed as "Mulan" and Riki dressed as "Snow White" for the photo shoot.

"A lot of people bring their families to conventions," Riki said, "so the kids might not know 'Earth 2 powergirl' but they’ll know a Disney princess when they see it."

"That’s the thing I enjoy about being Snow White. I can wear the sexy costumes and guys will want photos with me but I still get elated when children come up to me and they think I’m the princess and they talk to me and they tell me about their day, they tell me everything that they’re wearing, and I have a fifteen minute conversation with kids! It’s just a really great feeling."

Another great feeling for Riki is the pride and gratitude she feels for the "Cosplay for a Cause" calendar she spearheaded. It's a 2012 calendar featuring some of the best-known cosplayers in never-before seen photos of Japanese-origin characters.

She had the idea to create a charity cosplay calendar last March when a massive earthquake and tsunami hit parts of Japan.

"It’s sort of the first of its kind. The cosplay community is kind of tight but I haven’t heard of a lot of cosplayers coming together to do something for charity," Riki said. "I first contacted Yaya, she is a well-known name in the cosplay community, and if she were part of it a lot of other people would think, ‘hey, this is legit, on the up-and-up.’" And they did.

Riki and Yaya's calendar features cosplayers from Russia, Singapore, Brazil, Italy, Canada and the US. The collectible value of this kind of calendar is what Riki and Han hoped would make it popular with cosplay and Japanese-origin entertainment fans.

Additionally, comic book artists for Marvel and DC contributed unique illustrations for each page of the calendar, making the finished product truly one-of-a-kind.

Thanks to pre-orders and fan convention sales over the last year, Riki and Han are nearly sold out of the calendars. They're saving two calendars, signed by every cosplayer involved (and which traveled around the world in order to end up that way) to auction off in December. All the proceeds they make from the calendar will go towards the Japan Red Cross.

"So many of us, we love these things that come from Japan. We play the video games every day, we read the manga, people watch the cartoons, they absolutely love it," Han said. "It’s a passion of theirs. And for us to be able to give something back to the country that created all of this, that was the main focus. I think the calendar has been a success because people do want to donate and they want to support this cause."