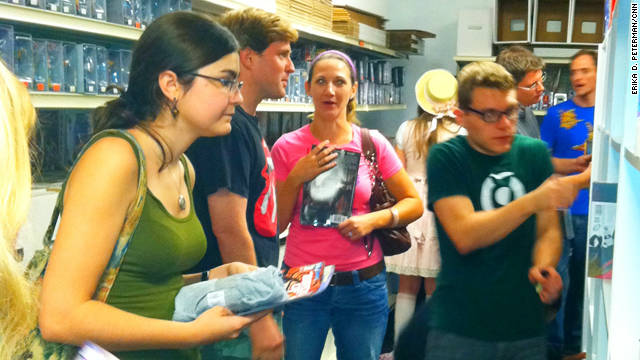 We talked to Brian about the party, controversial portrayals of female characters in the capes genre, the DC re-launch effect and the brick-and-mortar advantage in a digital age.
CNN: Why did you decide to throw the Unicorn Party?
Jacoby: It was all of the hubub on the Internet about women not being part of the hobby at all. Day in and day out, I can see that’s an utter lie. I see customers walking in my door who are female and of different ages every single day — everyone from women in their 60s to teenagers. I see lots of daughters coming in with their moms and dads, and they love the stuff.

Comics have never been a medium for men or boys. It may have been a medium that’s been dominated by men and boys for a long time, but I don’t think that’s been true for the last 25 years. I estimate that 30 percent of my customer base is female. It varies from week to week. Some days the testosterone level is overwhelming in the store, and some days the estrogen level is high because everyone has different shopping patterns.

The gay rights movement had the slogan, “We’re here, we’re queer, get used to it” as a rallying cry for a long time to get people to realize that it’s not just that one guy. They’re your friends and neighbors. They’re your family members. The same is true of people who read comics. Your mom, your sister, your daughter, your cousins, the girls at the checkout counter — every single person is potentially a comics reader.

When a couple of guys walk into a comic book store, with the exception of the big cities, there aren’t 20 people in the store at any given moment most of the time. If they see another guy, they think, “Oh, look, someone who looks just like me.” If it’s a woman that they see in the store, then they think, “It’s that rare and mythical creature, the unicorn.”

When a woman walks into a comic book store, odds are that she’s going to see a male or a couple of males, and that’s it. I’ve had days when we’ve had 25 customers walk through the door and 10 of them are women, but they’ve never been in at the same time. People tend to shop by themselves and they tend to consume by themselves. I thought it would be a good idea to have an event where all the female comic book readers in this area could meet each other and see that they weren’t alone.

CNN: DC Comics drew a lot of criticism recently from readers who were offended by the portrayals of some female characters after the re-launch (Catwoman, Starfire in “Red Hood and the Outlaws” and Priscilla Kitaen in “Voodoo”). What’s your take on the discussion that ensued?
Jacoby: The complaints are definitely valid. In the superhero genre … the anatomy is deliberately exaggerated, and on women it’s almost always the breasts. With men it’s always the muscles that are exaggerated the most. But it’s not universal. There’s always been a range of art styles.

While the recent controversy has been full of valid complaints, some people have taken them to mean that all comics are that way. Even the people who originally raised the complaints wouldn’t go as far as to say that all superhero books look like this.

There was a Twitter discussion between (comics industry journalist) Heidi MacDonald and (writer) Gail Simone and they raised the question, “Are we talking about the craft to the exclusion of the really good portrayals?” The very same week, “Birds of Prey” and “Wonder Woman” came out with really good portrayals of strong women with clearly defined personalities, but it got completely lost in the discussion about “Red Hood” and “Catwoman.”

CNN: Now that readers have had a chance to read some of DC’s re-launched titles, what has general response been from your customers? Has some of the opposition died down?
Jacoby: With the exception of people who have lost their jobs recently, people have been continuing to add more titles to their lists than they are taking away. I’ve actually had a few regular customers who have always bought from multiple publishers say to me, “I’m going to drop some of these Marvel titles I’m not enjoying anymore and pick up some of those DC titles."

While there’s not nearly the amount of publisher loyalty there used to be, I think that the re-launch and the overall perceived quality of the re-launch have made a lot of people rethink their publisher allegiances. The best-case scenario to me is that every customer buys the stuff they like most.

I look forward to seeing what Marvel’s response to this is. The public plan was never, “Let’s grab Marvel’s market share.” It was all about, “Let’s make a bigger market.” If they get more of Marvel’s share in the meantime, that’s excellent because that means Marvel is going to try harder, too. The more the publishers are willing to take risks and look outside the already existing comics market to find readers, the more they’re going to find them.

CNN: Comic book readers have a lot of purchasing options, including digital and online mail delivery services. How can brick-and-mortar shops compete?
Jacoby: The advantage that we have is the advantage that every brick-and-mortar store has over every Internet service, and that’s customer service. The conversations that people have on the Internet about who’s going to win between Thor and the Hulk, you can have them with your fellow patrons at your local comic book shop where you can actually see the people and make reasoned arguments. The social aspect of discussing the hobby is a major part of it.

When you’re shopping for shoes, you can look online but you can’t look at them online on your foot and see how it looks. The same is true of comics. Comics art on a digital screen looks different from comics art on a printed page. That’s something that’s not true of TV and movies. Those are all digital mediums, and comics aren’t like that.

The browsability, the social aspects and customer service, that’s all stuff that, until we get 100-percent of virtual reality, you’re not going to be able to get anywhere else except a shop. For most online services, most customer service means dealing with complaints. For most brick-and-mortar shops, it means doing good things for your customers.

Events like Free Comic Book Day and the Unicorn Party have shown me that even in a terrible economy – or a stalled recovery – people love comics and they want to spend money on them. It’s something that grabs onto you and you can never have enough. In his introduction to “Beanworld.” Scott McCloud (author of “Understanding Comics”) says something along the lines of, “You are the first person to read this book. Thousands have been here before, but none of them experience it just the way you do.” It’s true of everything in comic books. It’s been five years since it ended and people still disagree about what the meaning of “Civil War” was.

CNN: What’s your advice to people who want to read comics but have no idea where to start?
Jacoby: Go to your local comic shop and ask the person behind the counter. Say, “I’ve seen ‘From Hell,’ I’ve seen ‘Watchmen,’ I’ve seen a ‘History of Violence.’ I want to read stuff that’s like that.” Even the most Android's Dungeon-style comic shop in the world is going to be able to point you at something.

Most comic book stores are not like that, though. They have great people who are going to be able to show you a wealth of things. Grab something that’s related to what you’ve already watched. Grab “The Walking Dead.” There are comics based on “Buffy the Vampire Slayer “and “CSI.” Your local comic shop is going to be your best bet. They know what will pull you in.